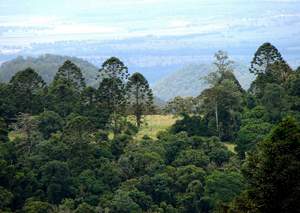 Like so much of Australia’s indigenous history, a true and full account of the bunya nut festivals in Southeast Queensland may never be known. Stories of celebration and cooperation, finely tuned to the erratic life cycle of the bunya pine, which drew thousands of Aboriginal people from as far away as Charleville, Dubbo, Bundaberg and Grafton, not only fires up one’s imagination but also demand an enormous respect for the traditional people and culture of this land.

Recently I moved to Montville, a small town on the Blackall Range in the Sunshine Coast hinterland, an absolutely stunning part of Southeast Queensland that has many a tourist gawking at its subtropical lushness and ancient volcanic landforms. The local media implied that Baroon Pocket, one of Montville’s tourist attractions, was the exclusive site of the famous bunya nut gatherings. I later spoke to an Aboriginal lore man, a dear friend of many years, who told me that the Bunya Mountains, and not Barron Pocket, were in fact the home of the bunya nut festivals. The Bunya Mountains are now part of a large national park about 200 km, or three hours’ drive, north-west of Brisbane. A little research, prompted by my curiosity, found one source that says the last “traditional” bunya festival was in Baroon Pocket in 1887 and then another saying that the last festival was in the Bunya Mountains in 1902. Regardless of the conflicting historical data, it appears most likely that these unique festivals took place at several different locations within the natural range of the bunya pine forests in Southeast Queensland. My curiosity also extended to planning a camping trip to this national park.

The tree itself is magnificent and the sight of large dominant conifers in full rainforest was, to me, a new and unexpected experience. The dome shape of its uppermost foliage is iconic and the massive bunya cones are spectacular. If you’ve ever witnessed one of these cones hitting planet earth you’ll appreciate the respect these trees demand from even the most hard-headed Homo sapiens. The very sizeable nut with its distinctive flavour and high nutritional value could be described as the quintessential bush tucker. The fact that over thousands of years Aboriginal people gathered from such huge distances when the nut was in season is testament to its value both as a food and as a unifying symbol of aboriginal culture.

There is no doubt that the decimation of the indigenous people and of the land of Australia, as a result of the occupation by Europeans since 1778, is something that many look upon with a sense of sorrow and shame. I feel this most when walking in what I mistakenly believe to be untouched pristine forest, only to stumble upon massive tree stumps that evidence logging from some bygone era. This has occurred several times in my life, the latest being when camping in the Bunya Mountains National Park. It may be with the wisdom of hindsight, but nevertheless still a valid reaction, that so many of us today scratch our heads and wonder, “what the hell were they thinking?”

By one hundred years ago the indigenous people in Southeast Queensland, and in many other parts of Australia, had been forced from their land and the easy pickings such as timber and gold were quickly exploited and exhausted. The speed at which white man spread out across practically every square inch of this rugged landscape to steal the very best timber is staggering. To think that most of it was shipped back to England to build and furnish the “mother country” further adds insult to injury and does nothing to enlighten us as to the motives behind the actions of our ancestors. Yes they were from another era, playing their role in an expanding and imperialist empire, but the indiscriminate exploitation of such forests, that has irreparably scarred what was once a sacred and protected landscape, is not only incomprehensible but unforgivable.

One now can only wonder, or dream, at what it must have been like in the not too distant past when the bunya pine and the rainforests occupied a much more natural distribution and abundance. The remnant forest at Mary Cairncross Scenic Reserve, in the Blackall Range, is 55 hectares of forest that, thanks to a pioneering woman’s foresight, is 55 hectares of untouched forest. When walking under the canopy, and observing in amazement the sheer scale and grandeur of pristine rainforest, one can begin to gain an understanding of how much of what we think is untouched is really just nature attempting to recover from the ravages of the early entrepreneurs.

But the past cannot be changed. We who walk the earth today have a duty to learn from history and change how we act so as to ensure that there is a future worth leaving to our descendants. The issue of Coal Seam Gas that presently confronts not only the bunya country of Southeast Queensland but vast areas of the whole land, marks a point, where our decisions and consequent actions will surely be judged one way or the other in the future. Our hunger for timber in past centuries is analogous to our hunger for energy today and I sincerely hope that, with the immense knowledge amassed by the human race and an honest assessment of the devastation wreaked in the past, we can act in a more responsible manner. With a dash of respect for the beauty of life on Earth, and a simple understanding of the necessity of conserving resources and biodiversity on a finite planet, let’s hope that in 100 years from now our descendants are not scratching their heads and wondering “what the hell were they thinking?”