Snow on a Summer Night 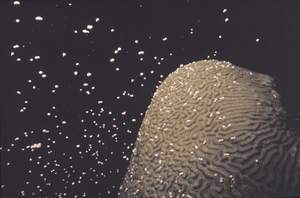 There is one night each year, just after a full moon, when it snows in summer.

Sam is sitting on the sea bed, silently watching the thin stream of bubbles drifting upwards, the tiny exhalations of his lungs, the little miracles of life that connect him to the planet. Although actually, he thinks, with a diver’s common sense, what is holding him right here, preventing him from shooting to the surface like a cork, is the tank and the weights he wears. Yes, what holds him down is that which sets him free.

It is not so deep, this area of the Coral Sea, into which he dived just a short while ago. Deep enough, yes, but still there is moonlight filtering down through the clear waters, onto the shoals of vivid parrot fish that gather round his fins like underwater butterflies, hummingbirds in slow-motion around a blossom, enjoying the feast stirred up by his idly waving feet.

Sam is sharing his little piece of ocean floor with the greatest living entity on Earth. Its curves and crenellations teem with life, they wave with silky fronds, they send out forests of delicate branches and they move and grow and are devoured and die, but the reef endures, as it has done for all time.

It is a thing of inexpressible beauty to him. Down here, it is not the gaudy colours of the picture postcards that the tourists send back home but infinite subtle shades of amber and topaz, violet and rose.

A shadow passes over him and he looks up. It’s not from the surface-tethered waiting boat but from a huge sea turtle, drifting effortlessly above, the pale beams shimmering on its kaleidoscope shell. It turns, descends towards him, and he sees its ancient eyes calmly regarding this alien visitor to its blue and golden world. For a moment their eyes meet and then, with a wave of one leathery flipper, it turns again and is away into the distance and the darkness. Sam waves back.

This is Sam’s other world, his perfect place and his escape from the mundane and the routine of the land. The creature that his forebears stripped of its precious shell and left to rot need have no fear of him. The fish that nibble curiously at his mask, or brush firmly along the flank of his wetsuit, are safe. And Sam is safe with them.

His dreams as a child were never ones of flying. They were always of being under water, of swimming until his lungs ached and he was forced to inhale the salty sea – and then the magic of finding that he could breathe in the liquid that should have choked his lungs. The water is, literally, Sam’s element. He thinks perhaps he was a dolphin in a previous life. Or perhaps he is in training to become one the next time around. He would like that.

But for now he is human and here and, although breathing artificial air and separated by thick latex from the water against his skin, his childhood dreams have become reality. And he is waiting for the biggest magic of all.

For, now, the reef’s own miracle begins and it is time to spawn. The moonlight is its aphrodisiac, a primeval trigger that marks the start of the greatest act of procreation ever known. All along its thousands of miles, the reef is making love to itself.

At first, just a few tiny snowflakes of the silvery larvae, then more, and within minutes Sam is sitting within a whirling snowstorm on a summer’s night. And it is snowing upwards.

Before too long, of course, they will begin to settle back down, these seeds of the new coral, adding to layer upon layer of centuries of infinitesimal growth that have become a benign leviathan.

Then, from the swirling eddies, a hand reaches out and clasps his wrist. It is his dive partner, his love, his Lucy, and their faces reflect back the awe each other feels. A watch is tapped – it’s time to go. And the two of them rise up amid the strange, warm blizzard of life towards the waiting moon and burst into the starlight, laughing, hugging, delirious and dazed.

Arms reach out and pull them back to the reality of the gently rocking boat. How was it? What was it like? Their friends are all clamoring to know. Sam and Lucy draw in sweet lungfuls of the tropical night air before they speak.