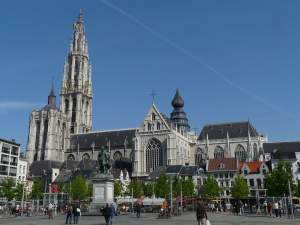 Our Lady’s Church at Antwerp is so vast that many masses may be sung there at one time without interfering one with another. The altars are richly endowed; the best musicians that can be had are employed; the Church has many devout services and much stonework, and in particular a beautiful tower. I also visited the rich Abbey of St. Michael, where are the finest galleries of stonework that I have ever seen, and a rich throne in the choir. But at Antwerp they spare no cost in such things, for they have plenty of money.

I have made a portrait of Herr Nicolas, an astronomer who lives with the King of England, and is very helpful and of great service to me in many matters. He is a German, a native of Munich. Also I have made the portrait of Tomasin’s daughter, Maid Zutta by name. Hans Pfaffroth gave me a Philip’s florin for taking his portrait in charcoal. I have dined once more with Tomasin. My host’s brother-in-law entertained me and my wife once. I changed 2 light florins for 24 stivers for living expenses; and I gave 1 stiver for a tip to a man who let me see an altar-piece.

The Sunday after the Feast of the Assumption I saw the great procession of Our Lady’s Church at Antwerp, where all the whole town was gathered together, with all the trades and professions, and each was dressed in his best according to his rank; every guild and profession had its sign by which it might be recognized. Between the companies were carried great costly gold pole-candlesticks and their long old Frankish silver trumpets; and there were many pipers and drummers in the German fashion; all were loudly and noisily blown and beaten. I saw the procession pass along the street, spread far apart so that they took up much space crossways, but close behind one another: goldsmiths, painters, stonecutters, broiderers, sculptors, joiners, carpenters, sailors, fishermen, butchers, leather workers, cloth makers, bakers, tailors, shoemakers, and all kinds of craftsmen and workmen who work for their livelihood. There were likewise shopkeepers and merchants with their assistants of all sorts. After them came the marksmen with their guns, bows, and cross-bows; then the horsemen and foot soldiers; then came a large company of the town guard; then a fine troop of very gallant men, nobly and splendidly costumed. Before them, however, went all the religious orders and the members of some foundations, very devoutly, in their respective groups. There was, too, in this procession, a great troop of widows, who support themselves by their own labour and observe special rules, all dressed from head to foot in white linen robes made expressly for the occasion, very sorrowful to behold. Among them I saw some very stately persons, the Canons of Our Lady’s Church with all their clergy, scholars, and treasures. Twenty persons bore the image of the Virgin Mary and of the Lord Jesus, adorned in the richest manner, to the honour of the Lord God. The procession included many delightful things splendidly got up, for example, many wagons were drawn along with stagings of ships and other constructions. Then there came the company of the Prophets in their order, and scenes from the New Testament, such as the Annunciation, the Three Magi riding great camels, and other strange beasts, very skillfully arranged, and also how Our Lady fled into Egypt— very conducive to devotion—and many other things which for shortness I must leave out. Last of all came a great dragon, which St. Margaret and her maidens led by a girdle; she was extraordinarily beautiful. Behind her followed a St. George with his squire, a very fine cuirassier. There also rode in the procession many pretty and richly dressed boys and girls in the costumes of many lands representing various saints. This procession from beginning to end, where it passed our house, lasted more than two hours; there were so many things there that I could not write them in a book, so I let it alone.