Once upon a Time 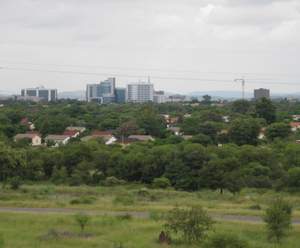 Once upon a time in wonderland everything stood imposing and exaggerated to the filthy tiny beings that often played hide-and-seek under the full moon. Now twenty years later, wonderland’s material composition and the tiny beings seem to have traded places.

The spacious houses with wide-open backyards that consisted of large lawns and queen-sized vegetable plots of tomatoes and chomolia seem to have shrunk over time. It did not help that in their endeavours to extend their houses the residents of Bontleng had cut down tall morula and mango trees whose branches had once towered above the now barely recognisable houses. The grey asbestos that once enthroned rooftops was replaced with rusty looking corrugated iron. Also, the sun had done an impressive job kissing off the chintzy mustard and maroon colour that once painted the houses. Together, these changes render the locality unfamiliar yet familiar.

Once a tiny being, it is in this neighbourhood that Alice stares awake this morning. Not that she has slept at all for the masses have gathered at her old family house to bid her grandfather farewell. She is reluctant to gaze into the wrinkled eyes of those that stare at her like something from a page in the earlier chapters of their lives. They speak a foreign language but from their toothless smiles and body language Alice can decode what they are saying. They say she is one of them and that like them she once spoke the foreign language.

When greetings are exchanged, their rough discoloured hands clasp at hers with youthful dexterity while their judicious age-defying eyes linger longer on her French manicured claws.

“Will she be able to help out with the chores?”

“Alice will be helping Malome with some shopping, so she can’t help out with the dishes Mme Dineo,” Alice’s cousin Wendy says, stealing her away from a group of gracefully aged women whose eyes she still feels following them.

“Any time,” Wendy croons while slipping a green apple into Alice’s jacket pocket.

“One apple a day keeps the doctor away,” they both chorus.

“Hope you have sunscreen, you will be stuck with him in that old truck all morning. He has a penchant for the scorching outdoors,” Wendy enunciates, pointing to their uncle who is recklessly offloading bags of potatoes and sorghum meal he just bought from a chain of random wholesalers in Gaborone West Industrial.

“Sit with me in the front,” their uncle beckons, seemingly enjoying the indiscriminately onerous chores unique to funerals and weddings. “We have to pick up a coffin and then visit the funeral parlour,” he enlightens her bluntly.

They park off the dusty road just opposite female street vendors who specialise in selling airtime, cigarettes and minty sweets to the male-dominated industrial place. The street they walk is littered with empty Chibuku boxes and, as you may have guessed, sweet wrappings and cigarette butts. The ample presence of sawdust and woodchips is the main residue material that gives away their trade. Tracing the narrow street are tightly-knit wooden and zinc warehouses which remind Alice of shelters usually synonymous with abject poverty.

She doubts this seemingly God-forsaken place can produce anything worth being called her grandfather’s second home before the long awaited yet dreaded trumpet resounds.

“Yep, but we have to get ours here,” her uncle responds briskly.

“But why this place? I literary feel like we have just walked into a dumpster. As for the possible quality of the product, what if the bottom falls off with granddad inside?”

“Thank you for that gruesome image, but we have to support local businesses. That’s what your grandfather would want.”

“You understand, right, that we cannot seem to be showing off Alice?” he inclines, “we have to be humble.”

All Alice perceives is a confirmation that she does not belong here. She does not fit in. Something inside her tells her she shouldn’t have listened to her parents when they asked her to come ahead of them while they wrapped up a few matters at home.

Like shadows on a wall, Alice softly lies on her skin. The farmhouse that Wendy escorted her to is cold. The furniture that once adorned it made way for the five months’ worth of groceries that is to feed mourners over the next twelve hours. A thick blanket prevents her body heat from completely dissipating.

From Bontleng, the last of the mourners are arriving at Monwane farm where Alice’s grandfather is to be laid. When she arrived two hours earlier Alice was barraged by a sea of curious eyes which made her feel so out of place.

For a split second she had felt as if she had traded places with Harry Potter. Everyone seemed to know something about her that she did not. They retold hilarious anecdotes from a past that involved her and were a little disappointed when she could not recall the events described. Those sensible enough to realise that she had been too little when her newly wedded parents took her abroad took pleasure in trying to jog her memory. Others however, she thought, looked at her with an evil eye. There was one who appeared to think her a snob and a city girl who had been deprived of her culture so badly that she only spoke The Queen’s language – English. When her cousin finally came to her rescue Alice was only too grateful and vowed to keep a low profile.

“Ally!” a soft-tender-loving-voice recalls her from a deep sleep cushioned by sombre melodies from the church choir she imagines swaying in the white tent.

“Mum,” she says trying to focus her sleepy eyes on the woman she thinks her mother.

“Your parents will be here in thirty minutes sweetie, thought we could catch up while we wait for them at the gate,” she says with a smile that melts Alice’s insecurities.

“Oh, I am so glad you remember me. You are all grown now. I haven’t seen you in almost a decade. Welcome home.” And she gives Alice a hug that almost knocks the life out of her.

In that instant, something Alice cannot begin to comprehend or translate happens. Some sort of epiphany it is. As if in a whirlpool of dust on a sizzling hot African afternoon, thoughts swirl in her mind. When they finally settle, she begins to see her country of origin in a different light.

While still embraced, it dawns on her that these people are her people not her enemies. She dismisses the scrutinising eyes she had encountered for genuine welcoming gestures. She feels there is no need for her to hide neither is there need to apologise for her blessings like her family has all along.

First, however, she decides it wise to try to come up with a concrete idea that will see her make a significant contribution in the lives of her people – especially the African child – rather than shy away or look down upon them. She acknowledges that though she wasn’t born with the particular disadvantages endured by so many African children, hers were indirect.

“It can only get better, it has to,” she muses, “and those privileged like me jolly well have to do something for those who are not.” 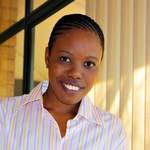 Sharon Tshipa is a Media Practitioner and Social Entrepreneur and lives in Gaborone, Botswana. Her stories have been published in Deyu African, The African Street Writer, The Kalahari Review and Running Out of Ink. Her Short Story entitled ‘Like Little Ones Do’ won her a 2013 Kola Magazine Award in Nigeria. Sharon has contributed to a historical play called ‘Sechele 1st’ published in 2011. She is also a CACEAfrica 2014 Writivism Writivist.
http://deyuafrican.com/2014/04/p-s-i-love-you/
http://www.kalaharireview.com/fictionpoetry/2013/4/5/ave-maria.html
http://theafricanstreetwriter.com/2014/07/10/like-little-ones-do/
http://theafricanstreetwriter.com/2013/07/05/sound-of-death/
http://www.runningoutofink.com/