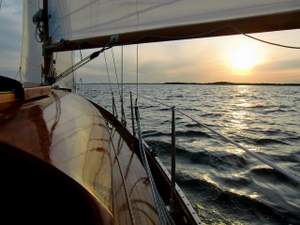 After our first full season on our ‘new’ 1998 Hunter 31, I happily nestled in to the tired kitchen at one of my favourite places on earth, the Fanshawe Yacht Club in London, Ontario. Today was a special day. It was the FYC Sailing School Banquet and ‘Take your Parent Sailing’ event. The previous summer, Celine of the Sea had prompted me to throw my ‘heeling hatred’ aside and Skipper a CL-14 with Martin. It did not matter that I had docked the boat backwards…I had sailed with my son and that was more precious than anything!

This year, I could realize a culinary fantasy – cook for the Sailing School Banquet and make a small profit for the Sailing School! As luck would have it, Capt’n Mike’s cousin Tracey had flown in from Liverpool for a visit. We had spent time on the ‘big boat’ in Hamilton and now Tracey was in London, happy to share this special night with us. I had thought for weeks about the menu, how I could make it cost efficient (and redeem myself from the budget misunderstanding last year.) It was just a marvelous coincidence that my catering chores meant I would not have time to get on the CL-14 this year. While I serenely simmered and stirred, quite a storm was brewing on Fanshawe Lake.

Martin, always eager to share his sailing antics with others, had invited his friend Christian along. So off went Capt’n Mike, Tracey – clad in Naval whites from head to toe, Martin and Christian, below the ominous clouds, beneath the canopy of Walnut trees, beyond the blue Sailing School building to the dock; each sporting an orange PFD. All the while: Capt’n Mike surveying the cloud formation, Tracey getting her Scouse on, Christian cloaked in teenage angst and Martin getting ready to Capt’n up!

From the Sailing School dock, the cliff off the northeast tip of the Forest City National Golf Club resembled the white cliffs of Dover. This was the first of a few British similarities that Martin and his crew would experience. While I mixed mayonnaise and lime juice for my epic coleslaw, Capt’n Mike was filled with mixed emotions! Should he take the helm away from Martin? Capt’n Mike knew the clouds and wind were building. Was this the time to let Martin reign as Captain of the CL-14? This was ‘Take Your Parent’ sailing night after all. What to do, what to do.

So, Martin at the tiller, Tracey on the Port side and Christian and Mike sitting to starboard, they glided out smoothly on the glassy water, Christian looking bored by the stillness of the lake and most likely wondering if he could get 3G while on the boat and play a game on his phone. Tracey was marvelling at the beauty of the lake and the adventure with her cousin! And Mike? Well, he knew the wind at Fanshawe could change instantly. Fanshawe folklore had it that Dennis Conner, an Olympian and 4 time winner of the America’s Cup, had capsized on our lake.

Mike could not contain his concerns. He knew how first mate “Will” McMaster Murdoch must have felt. As Martin turned the tiller to starboard, the boat turned north and its port side was hit by a strong gust. As Mike yelled, “Martin head back to the dock!” The CL-14 was overpowered. The heeling of the boat knocked Martin and Tracey swiftly into the August algal water. Christian and Mike fell into the lake like heavy hail stones, Mike actually landing on top of Tracey. The shock transported Tracey from a CL-14 at Fanshawe to a Steamship in the Atlantic. The wind howled and Tracey called out, “Everyone, stay with the boat!”

As soon as the dinghy capsized, the FYC Safety Boat raced over. Before Martin could say “Hey Christian, help me stand on the centreboard to right the boat.” Christian was headed to shore; looking less bored as he checked his phone. Meanwhile, Mike and Tracey trod water and Martin efficiently righted the CL-14. Three wet Wareings sailed to the dock and Martin silently de-rigged the boat.

It was a solitary stroll up the winding driveway, past the Sailing School building over to the Clubhouse, where I continued to simmer and stir. My serenity was broken by the heavy wooden door slamming open. I looked over to see 4 drowned rats standing in the doorway, Capt’n Mike with that same look after I had freaked out during our first sail to Leek Island. Christian and Martin shared a teed off testosterone temper – and Tracey? Well, her Naval Whites weren’t. She bore a striking resemblance to Alice Cooper. From beneath her blackened face, she forlornly looked up at me and said, “Coll, I’ve had a Titanic Moment.” I knew instantly that I had found a soulmate.