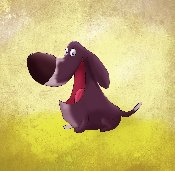 We all know that dogs chase cars but only the people of West Africa can tell you why.

Once, way back when people first began to drive cars on the bumpy roads that wind through the lush green forests, three animals – a dog, a leopard and a donkey – decided that they would go to the market in the big town to see what they could see.

Well, when they’d seen all the sights and smelt all the smells and heard all the cries of the market traders selling their wares they were tired and weary. They didn’t want to have to walk all the way back to their villages so they decided to take a taxi instead.

Before too long they arrived at the village where the donkey lived. He reached across from the back seat and placed his hoof on the driver’s shoulder.

“Stop here, driver,” he said, “this is where I want to be dropped off.”

The taxi screeched to a halt and the donkey clambered out.

“How much do I owe you?” enquired the beast.

“That seems fair,” said the donkey, giving the man the money.

The driver revved up the engine and the vehicle shot off.

Before long, the taxi came to a spot where the trees and bushes grew thickly all the way down to the edge of the road.

The leopard called out, “Put the brakes on, Driver, and let me out here.”

The driver did as he was asked and the leopard scrambled out of the taxi.

“What must I pay you?” asked the leopard

“Three thousand francs,” replied the driver, and held out his hand.

But the leopard just flicked his tail at the man and ran off into the forest. The driver shouted at him to stop but the leopard was gone. The man ground his teeth in fury, then slammed his taxi into gear and drove on.

The dog sat silently in the back seat until they came to the village where he lived.

The driver pulled over to the side of the road. The dog hopped out of the taxi and walked up to the driver’s window.

“Sorry, but I’ve only got a five thousand franc note,” said the dog. He gave it to the man who put it into his pocket. The dog looked expectantly at the driver.

“Can I have my change, please?” asked the dog.

“Not likely,” he said. Then he stamped his foot down hard on the accelerator pedal and roared off up the road in a cloud of dust.

From that day onwards, donkeys, leopards and dogs all do different things when they see a car come bumping along the forest road towards them.

Donkeys don’t budge an inch. They make the car drive right around them. They have a clear conscience. They paid their fare.

However, as soon as a leopard sees a car it races off into the forest as fast as its four legs can carry it. It’s scared that the driver has come back for his money.

But when a dog spots a car, it barks furiously and chases after it. You see, he is still searching for the driver who tricked him out of his two thousands francs.