Cricket in the Streets 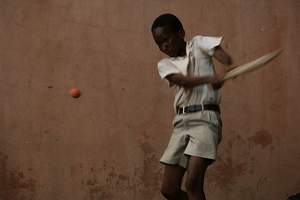 One of my most vivid memories of growing up as a young boy in Gros Michel is playing on the Oval. The Oval was what we called a small section of Lime Street where we all gathered to play games. We named it the Oval after hearing of cricket stadiums in Trinidad and Barbados called the Oval too. Dominica didn’t have its own stadium so we decided to create our own in Gros Michel; our own “Lime Street Oval.”

Whether football or cricket, the competition was always intense and even more so if we happened to be blessed by an unexpected but welcome rain shower. A downpour always seemed to take away all thoughts of tiredness and rejuvenate us. We could go on for hours at a time, as long as we were soaked, drenched, by the blessings of the sky.

I remember getting up very early on Saturday mornings, eating breakfast and then rushing out the door to join my friends to play a game of football or cricket. Another blessing about being a boy at that time, chores were tasks for the girls and we were left to roam freely, just as long as no one reported us for fighting or stealing, the two cardinal sins in my home.

That Saturday was no different; we had been playing for hours. It started out as a game of football, then changed suddenly to an intense game of cricket. Out came the “caca” rubber balls, bats made from the coconut branches, cardboard sheets as makeshift pads and glory cider branches for stumps.

I always enjoyed batting, never liked to be in the fielding team. Today my batting was on point, I hit cricket stroke after cricket stroke and the ball seemed to like my bat. I was driving the ball like Sir Gary Sobers, with the occasional exquisite cut and sweep. I felt good and none of the bowlers came close to getting me out. I had only made one bad shot, I lofted a ball towards mid off but Maggie was fielding there, he couldn’t catch a cold even if it was flu season. The ball hit the palm of his hand and scooped out; he almost grabbed it a second time. He really had butter-fingers. I could see the disappointment on the faces of his team-mates.

I had lost count of my personal score but I was sure I was somewhere in the forties. Fifty runs was a significant score for us, the team would have had to buy me sticky tablet from Ma Boyd’s shop for a whole week. I could already imagine licking off the black caramel from my finger tips. Ma Boyd sold everything from alcohol to sweets and we always went there for sticky tablet after the game. It was that or coconut cheese.

“Stop, Stop, I wanna play,” someone screamed from behind me.

“I knew that voice,” I thought as I turned around.

It was Shane. He was the best bowler in the village. He was so tall and strong; he could throw that ball from a mile away and still bowl you out. He was a sure pick for the national team in a few years time. I often overheard the old men saying he could make the West Indies team. No one from the small islands was on the team, something about the selectors always favouring the big island boys. But everybody in our village was sure Shane would be the first to wear maroon. He would make us all proud; Gros Michel’s finest.

“I want to play,” Shane shouted as he sprinted towards the wicket area.

“Because we done start to play and you cyah join.”

“Just throw a coin, heads or tails and I go join any of de teams.”

“No, we start already and it not fair.”

“Anybody have a coin?” he asked, with total disregard for me. We never agreed on anything, he always got his way though; he would bully everyone if he didn’t.

“Okay, I will jus play for de other team ner,” he responded as he grabbed the ball from the bowler’s hand.

“So? I want to bowl you cause I know you fraid me.”

“Well let me bowl den if you not fraid,”

“Okay bowl den!” I responded. He had a way of getting us to do exactly as he pleased.

Now Shane walked back to the bowling mark. He stormed in to bowl but I had a plan. As soon as he approached the crease I walked away from the wicket.

“Fraid who? Fraid Shane? Joke dat ner boy, a fly was in my eye.”

The truth is I was shaking all over; I couldn’t even grip the bat because my palms were so sweaty. I didn’t know what to expect from him. He went back to his bowling mark, only to storm back towards me again. This time I could see the anger in his eyes, he looked like he wanted to just rip my stumps from the ground and break them in half.

I could see a river of sweat flowing down his face, right between his cock eyes. I was always troubled by them, I never knew in which direction he was looking and that made him even more difficult to read as a bowler. Cockeyed and bowlegged, he wasn’t the prettiest site as he ran in to bowl but he scared the hell out of me. For some reason he hated me and I guess I would have hated me too if I was always mocking my walk, talk and eyes. I could tell that he really wanted to “chikayay” my wicket. Again as he approached the bowling crease, I walked away from the wicket.

“If you do not bat, I will throw a beamer at you,” he screamed at me. I could see the frustration building up in him. He was panting heavily now, as he put a lot of effort into his delivery strides. I was tiring him, my plan was working, I hoped. I was still nervous though, my palms still sweaty and now Junie was watching the game.

She was my childhood crush, the love of my life, back then. The prettiest girl in the neighbourhood and she liked me – well I thought she liked me. I didn’t want to make a fool of myself, I couldn’t, and I would never forgive myself for that. I had to bat and I had to be brave too.

I would stay in the wicket this time and play a stroke. As soon as I turned my attention back to cricket, I remembered that I was facing Shane but it was too late now, he was already delivering the ball. I couldn’t evade the bouncer, no time to dock and no room to leave the crease. Before I had a moment to blink, the ball had already struck my left shoulder.

“Your bat was down, you was ready”

“Something was on my mind”

“Something, someone or Junie?” Dwight shouted from behind the stumps.

“Shut up ner boy” I sprayed as I rubbed my wound, it was already swollen.

“Yes” I said nervously, knowing that my big mouth had gotten me in more trouble, as always.

“I’m gonna york you, right on your toes, look out,” Shane grinned at me.

Now I was the one who was sweaty, had the river overflowing down my forehead, even into my eyes. Shane looked a blur as he approached me as I was having trouble breathing, concentrating on his delivery. I don’t even know what happened next, all I remember was the laughter of everyone and picking my bat from off the ground.

The bat had been knocked from my grip. So powerful was the delivery that the ball found itself past the boundary mark, the make-believe boundary mark. I didn’t even have any time to realize what was going on but I wished that it could have been a single because I still had to face Shane. I decided the next ball would be do or die, I would swing with all my might.

He just grinned at me, as he stampeded towards the wicket. I observed that there was a glimmer in his eyes but I hoped that he had also seen the determination in mine. He sprung into action, leaped into the air and I saw that bright red rubber ball heading straight towards me. It looked even bigger than the full moon of last week, there was no way I could miss it. I was about to hit him for six runs. I smiled, tightened my grip on the bat and swung as forcefully as I could. It was my best stroke; well that was what I thought. I heard a crashing noise but nothing like I had expected. I heard shouts of jubilation, I saw Shane jumping in the air. I turned to watch my wicket, or what was left of it – broken pieces of wood, only one half-stump still in the dirt road. The others seemed to have disappeared, turned to dust. Something else was wrong, my hands were empty.

“Where de bat ner?” I asked, looking lost and bewildered.

“In Mad Lazare yard,” Shane shouted as he pointed in the direction of the broken down shack.

“How it end up dere ner?” I asked in disbelief.

“How you mean how it end up dere ner?”

“You doh know what you do den?”

“De bat fly from your hand and end up in de man yard, you better get de bat eh,”

The debate was pointless; I had to retrieve the bat. That was one of our unwritten rules. Whoever lost anything, ball or bat, had to retrieve it. It pained me when I realized what had happened, a blind stroke cost me my dignity that day. Broken wicket, lost bat, all too much for my ego and now I had to venture into the unknown….

Delroy “Nesta” Williams is a Dominican writer of poetry, short stories, songs, plays and articles. He started writing poetry in High School at the age of ten. Nesta has performed at the Nature Island Literary Festival and is now a member of its planning committee. He has participated in and organized many poetry events in Dominica, including the Many Moods of Love poetry competition and show, the Colours of Emotions, Lyrics Under The Stars and Word, Sound and Power. His first book of poetry, One Room Shack, appeared in 2011 and in both 2012 and 2013 he won first prize in the Independence Celebrations Literary Competition – the winning entry in 2012 was Cricket on the Streets. His piece Hair On My Chest was published as part of Jewels of the Caribbean, an anthology of Caribbean short stories published by by Potbake Productions. Nesta is active at senior level in several major organisations providing various forms of support to the youth of Dominica and the Caribbean.
Delroy “Nest@” Williams
cini26@hotmail.com
sewotoy@hotmail.com
http://delroynesta.blogspot.com
http://www.facebook.com/DelroyNesta
Twitter: @DelroyNesta