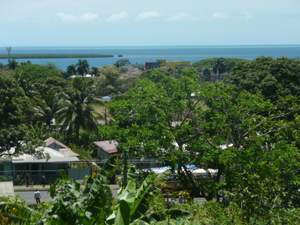 Yes, Indian girls were off-limits. As Troy mentioned, groups of native Fijian girls often giggled and flirted with just about any male PCV who walked by. The Indian gals, dressed in their lovely luminescent saris, would never say a thing to us or any other males, and nothing was to be said to them. It just wasn’t done. They might as well have been wearing burqas considering how approachable they were.

The culture of Fiji’s Indians was relatively unchanged from its Old-World origins. Although the formal caste system did not survive the trip intact, their society was a place where the marriages were almost always arranged by parents who picked carefully from the proper Hindu or Muslim social strata.

There were several thousand offspring from Fijian-European coupling. Their highest concentration was in the area around Suva. There was even a Fijian word, kailoma, for these children of mixed race. But if there were any Indo-Fijians or Euro-Indians, I had never come across or even heard of one. They were as rare in Fiji as snowflakes.

Whenever there was an outed sex scandal in Fiji Indian society, there was a tendency for it to be rectifiable only by the suicides of all participants, male and female. If the participants resisted that form of demise, they sometimes were hacked to death with machetes by male relatives. The Fiji Times, the daily English-language newspaper, reported this kind of violence surprisingly often for such a small country.

Indian society in Fiji was certainly nothing like the popular Kama- Sutra-at-the-ashram image of Indian life that was becoming in vogue back in the States. That image had been made popular by the Beatles’ visit to the Maharishi Mahesh Yogi in India the previous year. This, instead, was a survival culture of a grassroots people, those whose parents and grandparents had chosen five years of slavery as the better alternative to staying in India. They were not about to give up their fundamental convictions just because some of us in the Western world had recently decided it was time to lighten up about such beliefs.

I had already experienced an example of the power of those mores. Before I moved to Suva in June, 1969, I lived in Fiji’s second-largest town, Lautoka, on the other side of Viti Levu. Initially the Peace Corps staff, in their boundless wisdom, assigned me to live with an Indian family—mom, dad, and two boys—a veritable Hindu Ozzie and Harriet. They were pleasant people and lived in a comfortable house. But at twenty-three, the last thing I wanted to do was to reside with a family—my own or anyone else’s. I was all for cultural immersion, but a young man needed some refuge for privacy. To my understanding, though it was wrong, no other Fiji PCV was being asked to reside inside a local family’s home. So I protested to my superiors and was thrilled when, after three weeks of my having unpleasant childhood flashbacks, they allowed me to swap Chez Chopra for a rickety government-run dormitory, aptly called the Bachelors Mess.

Twenty of us messy bachelors were living there. Two were other PCVs, and most of the rest were unmarried young Indian men who worked in various government positions. We each had a miniscule
bedroom, but shared bathroom facilities and ate together in a common dining area. Our meals were prepared by an Indian woman who also did the cleaning. She and I developed a cordial relationship, but I knew the unwritten rules and kept quiet when others were around.

Amrisha was about thirty, but looked a decade older, probably owing to a harsh life. She had never married. Her impoverished family could not come up with enough of a dowry—something that considerably reduced her standing in the local Indian community. Still, she was upbeat and seemed to appreciate our conversations, limited though they were by my awful Hindi and her better, but stilted, English. The Indian men living at the Mess mostly treated her with disdain.

Not long after I moved in, our wood frame building required extensive repairs, and a construction crew of five Indian men started coming daily. They stayed for almost a month. One morning, not long after they left, I noticed that a new woman was making breakfast.

I turned to one of the Indian residents and asked, “Do you know where Amrisha is today? Do you think she could be sick?”

He replied, “It seems you have not yet heard. Amrisha and one of the men on the construction team were caught having sex. The bloke was married and his wife somehow found out about it.” A smirk spread over his face.

“Not where she is going.” He laughed. “They hung themselves and were found in her room.” From beside his neck, he raised a clenched fist, crossed his eyes, and stuck his tongue out.

My stomach caved in. Tears welled up in my eyes. “Oh no. Oh God. That’s horrible. I’m so sorry.”

“Don’t be. The whore was lucky they let her go out the easy way.”

© 2012 Will Lutwick
Extracted from: Dodging Machetes – How I Survived Forbidden Love, Bad Behavior, and the Peace Corps in Fiji.
Amazon UK, Amazon US.
Image: Michael Johnson

Will Lutwick has degrees from Duke University and the University of Michigan. After completing his Peace Corps service in Fiji, he returned to the United States where he has had a career in marketing, financial administration and business systems design. He has been published in the San Francisco Chronicle and the San Francisco Focus magazine and lives in – where else? – San Francisco. Will worked for three-and-a-half years on Dodging Machetes before its release. “As my first published book, I wanted it to be perfect, a book I would always be proud of.” And both readers and critics agree: Dodging Machetes is an exciting, compelling read.
www.WillLutwick.com