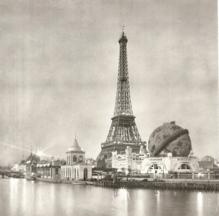 A Parisian who is not rich enough to keep a distinguished chef of his own will occasionally order a dainty dinner to be forwarded to him from some hotel or restaurant; and in these cases the repast, as soon as it is ready, is sometimes put into a hackney cab and driven to the house of the consignee by the cocher, who is not unaccustomed to find this “fare” more remunerative than the fare he habitually conveys.

A glance at the cocher, as another of the Parisian types of character, may here be not inopportune. As a matter of fact, however, the cocher is not one type but several. The name applies to the driver of the omnibus, of the fiacre, and of the private carriage. As to the omnibus driver, he is more amiable, more easy-going, less sarcastic than his counterpart in London. Nobody would ever hear an omnibus driver in Paris say, as one has been heard to say in London, when a lady passenger requested to be put down at 339½ —— Street, “Certainly, madam, and would you like me to drive upstairs?” Nor is the Paris cabman so extortionate as his London brother; for the fare-regulations, by which there is one fixed charge for the conveyance of a passenger any distance within a certain radius, precludes the inevitable dispute which awaits the lady or gentleman who in our metropolis dares to take a four-wheeler or a hansom.

Already in the sixteenth century hackney carriages were driven in the streets of Paris; and any differences arising between the cocher and his passenger were at this period referred to the lieutenant of the police. The private coachmen, attached to the service of the nobility, found their position a somewhat perilous one in an age when quarrels were so frequent on the question of social precedence. If two aristocratic carriages met in some narrow street, barring each other’s way, the footmen would get down and fight for a passage. Serious wounds were sometimes inflicted, and even the master would now and then step out of his vehicle and, with drawn sword, join in the affray. The coachman, meanwhile, prouder in livery than his master in braided coat, remained motionless on his box in spite of the blows which were being dealt around. It is related that when on one occasion a party of highwaymen attacked the carriage of Benserade, poet, wit, and dramatic author, his coachman sat calmly at his post, and amused himself with whistling whilst his master was being stripped of everything. From time to time he turned towards the robbers and said, “Gentlemen, shall you soon have finished, and can I continue my journey?”

The private coachman varied in those days, as he has always done, according to the position of the master or mistress whom he served; and Mercier, writing at a later period, indicates a sufficient variety of cochers of this class. “You can clearly distinguish the coachman of a courtesan,” he says, “from that of a president; the coachman of a duke from that of a financier; but, at the exit from the theatre, would you like to know where such and such a vehicle is going? Listen to the order which the master gives to the lackey, or rather which the latter transmits to the coachman. In the Marais they say ‘Au logis’; in the Isle of St Louis ‘À la maison’; in the Faubourg Saint-Germain ‘À l’hôtel’; and in the Faubourg Saint-Honoré ‘Allez!’ With the grandeur of this last word no one can fail to be impressed. At the theatre door stands a thundering personage with a voice like Stentor, who cries: ‘The carriage of Monsieur le Marquis!’ ‘The carriage of Madame la Comtesse!’ ‘The carriage of M. le Président!’ His terrible voice resounds to the very interior of the taverns where the lackeys are drinking, and of the billiard rooms where the coachmen are quarrelling and disputing. This voice quite drowns the confused sounds of men and horses. Lackeys and coachmen at this re-echoing signal abandon their pint-pots and their cues, and rush out to resume the reins and open the doors.”

The profession of the hackney coachman has always been and still is subjected to a special legislation. In Paris anyone exercising it must be at least eighteen years of age; carry upon him the official documents in virtue of which he wields his whip; present to his fare the card which indicates the number and tariff of the vehicle, and which the passenger must retain in view of possible disputes; show politeness to the public; receive his fare in advance when he is driving to theatres, halls, or fêtes where there is likely to be a crush of vehicles; never carry more than his legal number of passengers, and not smoke on duty. When travelling he must take the right side of the road, avoid intercepting funeral processions and bodies of troops, go at walking pace through the markets and in certain other specified places; and, from nightfall, light up his vehicle with a couple of lamps. The lamps used for the cabs of the Imperial Company are blue, yellow, red, or green. These different colours are intended to induce passengers leaving the theatre at night to take, by preference, those vehicles which belong to the quarter in which they live; blue indicating the regions of Popincourt and Belleville; yellow those of Poissonière-Montmartre; red those of the Champs Élysées, Passy, and Batignolles; and green those of the Invalides and the Observatory. Besides the penalties pronounced by the penal code for causing death or personal injury through careless driving, minor infractions of the regulations are punished, by the prefect of police, with suspension of license or, in certain cases, final withdrawal. The proprietors and masters are responsible for any offences committed by the coachmen, and for any loss or injury to luggage or other goods confided to their vehicles for transport.

The law which prescribes to Paris cabmen one uniform fare for journeys of no matter what length within a certain radius would at first appear to be very much to the advantage of the public, who are thus protected from extortion. It has a great drawback, all the same. In London a cabman is always delighted to see a gentleman step into his vehicle, even though the welcome he evinces be rather that of the spider to the fly. He unhesitatingly drives him to his destination, and the gentleman, even though he is fleeced at the end of the journey, at least gets where he wished to go. But the Paris cabman is fastidious. If the destination mentioned by the intending passenger does not exactly suit him, he is prone to shake his head, ply his whip, and drive away with an empty vehicle.

The alacrity and enthusiasm of the London cabman are due to the fact that when he has his passenger safely inside the hansom or “growler” his soul is animated by the hope of obtaining a fare indefinitely in excess of the legal tariff. The uniformity of fares in Paris deprives the cabman of any enthusiastic interest in his work, as it likewise strips him of some of the curious and amusing characteristics which he might otherwise exhibit.

In our own metropolis a famous millionaire, having ridden one day in a cab for the distance of a mile and a half, tendered the driver a shilling in payment of his fare. The driver stared at the coin in the palm of his hand and then proceeded to remonstrate. “Both your sons, sir,” he said, “when ever they ride in my hansom, pay me at least half-a-crown.” “I dare say they do,” replied the millionaire, “for they have an old fool of a father to back them up.” In Paris, where this millionaire had a brother as rich as himself, such an incident would have been impossible.