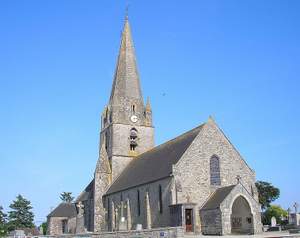 Large portals guard its sanctity
allowing my careful entrance only
through a small hidden side door.
Inside waits a languorous sepia world,
soft dust veils trailing the pews,
a ship becalmed in time.
Outside the patient cemetery
waits to claim the congregation,
tenderly guarding flesh and bone,
holding infant, parent, stranger
until they all become grey stone.
The big church dreams, altar waiting,
worshipping with the hourly bell;
hymn books in well handled order
praise the creator in silent song.
Sunday descends with dignity
upon the holy, steadfast ship
with her solemn headstone garland
of bloom-covered, silent graves.