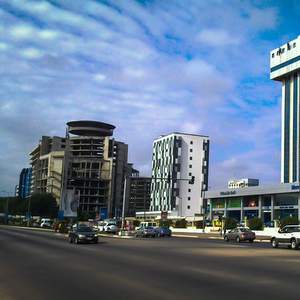 Suffocated by both the overwhelming Ghanaian heat and her cousin Gloria’s embrace, Ama struggled to breathe, yet clung to her fun loving cousin after not seeing her for five years. She joined in the little side to side dance that Gloria insisted on leading her in.

Gloria didn’t seem the least bit affected by the sun blasting down on them.

“I took two weeks off from work so I could show you around Ghana properly. The last time you were here we didn’t go anywhere because of Grandfather’s funeral.”

If Ama never had to attend another funeral in Ghana again, she’d consider herself lucky. The stress of the event made her take an extra week off work when she returned to the States. So many people pulling her in directions she didn’t want to go. Sitting at places she had no desire to be. And being teased by family members whom she didn’t feel knew her well enough to do so.

Gloria always stuck to her when she came to Ghana. Ama had difficulty wiping off her grin so she stopped trying. She stared at the woman people often mistook as her sister.

“I have some plans of my own.”

Her cousin led her to the parking lot, gossiping about family members all the way. It didn’t help that Ama pumped her for more information and juicer news.

Opening the door to her Volkswagen Passat Gloria asked, “So where would you like to go while you’re here?”

Ama fanned herself with her hand as they waited for the car to cool.

The tinkle of her cousin’s laughter made her chuckle as they pulled out into the main road.

“Pick a place, any place and I’ll take you there. Cape Coast to visit the castle?”

She paused for a moment before barging on without receiving a response.

“While we’re there we can go to Kakum National Park. It’s not too far. They have that canopy walkway built way above the forest trees. It looks scarier than it is.” She giggled. “The first time I went on it I recited the Twenty-third Psalm the whole time.”

Ama laughed, recalling her own experience at the park.

“I’ve been to both Kakum and Cape Coast about ten years ago. I had to talk Dad into not turning back before he crossed the first canopy. I thought I’d rupture a spleen when I held in all that laughter after looking at his expression. I’d never seen him look so scared.”

“Ama, you didn’t hold in your laughter at all. We had to send you away stumbling and doubled over in a fit of giggles so that your dad would stop growling at you.”

“Oh yes, I remember now.” Ama wiped away her tears of mirth.

“What about Mole National Park. I’ve been there once and the elephants graced us with their presence at the watering hole. We had to be careful of the baboons though, they like to steal. Uncle Kwame got his hat taken right off of his head.”

“It sounds like fun, but I think I’m going to melt in all this Accra heat. Could we postpone the journey to the hotter region up north to when I return during a cooler time of the year?”

Gloria pouted. “Sounds fair.” Her eyes brightened after a moment. “What about some shopping at the malls. I’ve been wanting to go to this new one in Weija. It’s huge.”

Ama looked around as the car sped down the road. What in the world had happened to this area? Where had all of these modern steel and glass high-rise buildings come from? So many of them hadn’t been there during her last visit. Progress in Ghana was good.

“I live in New Jersey. Trust me when I tell you that I know shopping malls. It’s not what I want to see during this visit. But it might be interesting to take a little peek.”

“You have a point. I got dizzy when you took me to some of your malls when I came to visit you a couple of years ago.”

“And you got lost.” Ama chuckled,“I had to have your name announced on the overhead speaker and everything.”

Gloria harrumphed. “Well, I don’t think our new mall is quite as big.” She tapped her fingers on the steering wheel. “Have you ever been to Nzulezo in the Western Region?”

“Wasn’t that the place where the village is built on a lake? Didn’t your younger brother fall into the stream on the way to the village?”

“Good thing they made us wear those life vests, otherwise he would’ve drowned.”

Ama made no attempt to stifle the laughter which burst out of her as a guffaw.

“Please, Gloria. It was almost the dry season. The water was so low that the canoe got stuck a couple of times and the guides had to get out and push it. The water didn’t even reach your brother’s stomach.”

Gloria drove past lots of large intricate homes as Ama collected herself. She loved the memories she had of being in Ghana.

Never one to give up easily, Gloria plowed on with her ideas.

“How about the beach? There are so many…. Kokrobite would be nice. Or the lakeside at Akosombo. It’s really pretty and relaxing.”

Ama let her cousin come up with a few more places to visit, shooting all of her suggestions down in her head. She had no desire to really go anywhere. Her plans consisted of more intimate events.

When they reached home Ama held both hands forward towards the large dark brown, two story building with a grin so wide it hurt her face.

“This is where I want to be. My objectives are to complete the mission my parents sent me on to check on their houses and land and then all I want to do is hang out with my family.”

She’d missed them while living in the US. After meeting them only a few times in her life, they’d left a deep and lasting impression. Her mom always told her, “Family is family. No matter how hard you try, you can’t get rid of them. Good thing ours is so good so you’ll never want to.”

“I can’t wait to hear Grandma’s stories about how hard life was during the coups she survived. Or to have your mom tell me about all the trouble she and my mother used to get into when they were younger.”

Ama sucked in a quick breath, not giving Gloria a chance to interrupt.

“To hang out with all my cousins, aunts and uncles so I can get to know them better. I just want to be surrounded by family as we chat and relax. Oh yeah, we’ll be eating, too. Lots of Ghanaian dishes with fresh ingredients.”

Gloria stared at her hard after pulling up the car’s hand brake in front of the gate.

“All you want to do is spend time with us? No trip to Kumasi to see the kente weavers?”

Gloria arched an eyebrow, “A visit to feed a crocodile in Paga, and sit on it?”

Ama had no idea where Paga was, but there was no way she’d be sitting on a crocodile any time soon.

Ama waved her hands to cut Gloria off.

“Why is it so hard to believe that I want to be with my family and not go anywhere?”

Gloria slumped into her seat. “It’s what I do every day.”

“So all of these trips were to make your life exciting?”

“Yes….um…. no. I wanted you to experience the touristy things about Ghana so you could brag to your friends in the States about how beautiful it is.”

“I’ll tell them about the beauty of Ghana that I’ve already seen and about the wonderfulness of my family. If it makes you feel any better, I’ll take you for a drink at one of those luxury hotels at the beach in Accra.”

“Can we eat there too? The food is so good, if expensive. The last time I went, I ate so much at the buffet, I came this close,” she held up her thumb and forefinger, “to vomiting.”

She leaned back against her seat and sighed.

“Yes my food loving cousin. You can eat until you’re on the verge of barfing. We can even take that guy you’re always talking about on Facebook. Your boyfriend,” Ama teased.

Gloria beeped the horn to have someone come open the gate so they could get inside the compound.

A few minutes later Ama sat in the midst of some of her extended family, relishing feeling just as home in Ghana as she was with her parents in the US.