The Cup of Tea 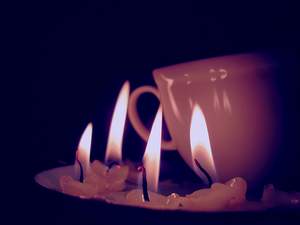 Afterwards Helga was never quite sure why she had done it. Was it purely force of habit, or had she been prompted by her guardian angel?

It was a cold wet winter’s day on their small farm in Hungary in June 1944. Helga’s heart jumped a beat as soon as she heard the sound of the boots on the path. She was expecting her husband to come in with two buckets of milk from the cows in the barn but a stranger was coming, treading differently to her beloved Willhelm. Quickly she put a restraining hand on her daughter’s shoulder, pushing her back down onto her stool by the wood stove, and hurried to the door in response to the urgent banging.

All her fears were realised when she opened the door. A young German soldier was standing on the porch, water dripping from his helmet and his sodden overcoat.

He spoke in German, “I’m looking for Willhelm Schmidt,” he announced abruptly.

Helga answered in the same tongue, “He is working on the farm.”

The answer was deliberately vague. Helga blocked the doorway with her body hoping that her husband would see what was happening and make his escape, but the soldier pushed past her and closed the door quietly and deliberately.

He leaned his rifle against the wall, put his helmet on the table, loosened the wet overcoat and seated himself comfortably at the kitchen table.

Helga took up her position on the other side of the table, preparing the meagre vegetables for their evening meal. She paused, staring at the round surface of the helmet and at the insignia on the side, the German eagle holding the swastika in its claws. Yes they have their claws into us, she thought, we really should have expected this.
But they had hoped that Willhelm – Willhelm, who did not use his Jewish name, who had not been to the synagogue for years, who had a devout catholic wife who did attend mass – they had hoped that he would have escaped notice. Thousands of Jews had been rounded up and sent off to Germany in those awful cattle trains to who knew what horrid fate and now it was her husband’s turn to go.

Helga turned, took up her oven mitts from their hook and opened the oven door. Yes the scones were ready; their savoury smell filled the kitchen. She took them out and placed the tray on the end of the stove.

She glanced across at her unwelcome guest. Oh Mother of God, he is only a boy, she thought, just carrying out his orders. So many callers had sat in that chair over the years. Always she had served them tea and scones.

Otto met her eyes. The kitchen was warm and homely, much like his mother’s kitchen back in Germany. He caught his breath as Helga turned and reached for the time-worn tea caddy on the mantle piece, tucking a strand of blonde hair behind her ear with her other hand. How often had he seen his mother do just that? The resemblance was uncanny. Perhaps his mother was doing just so at this moment.

Helga put the tea into the pot, poured in water from the kettle. Taking a plate from the dresser, she fetched some home-made butter from the cool safe in the next room and spread a generous smear on each of four halves of the warm scones. Silently she poured his tea and passed the cup to him together with a small jug of milk and the plate of scones. With a small push she indicated the sugar bowl on the table, still with a meagre scrape of sugar in the bottom. He met her silent gaze with a rather startled look and quietly helped himself to milk and sugar. He sipped his tea, embarrassed by the stillness of the room, and bit into a delicious scone.

To break the silence and cover his awkwardness he spoke to the young girl who sat by the warm stove sipping a mug of milk.

“What is your name?” he asked.

“Esth…” “Her name is Maria!” Helga broke in quickly across her daughter’s reply.

Esther gave her mother a startled glance but said nothing.

“Maria is a nice name,” replied Otto. And a safer one than Esther, he thought. Oh my God I hope they leave the child alone, bad enough to lose her father. This is a shocking business to be part of. The scones are delicious. Best I’ve had since I left my own home.

Willhelm’s step sounded on the path and Helga froze. Otto moved quickly, picking up his helmet, jamming it onto his head, grabbing the rifle and quietly moving to a spot beside the door so that he was behind Willhelm when it opened.
Willhelm unlatched the door, pushed it open with his foot and came in with a bucket of milk in each hand. His eye moved from the empty cup and plate on the table to Helga’s frozen expression. Slowly he put down the buckets and turned.

“Willhelm Schmidt, you are a Jew. I arrest you in the name of the third Reich.”

Willhelm did not reply or greet his family. He turned and walked out of the door, the young man behind him. The door banged shut.

Helga collapsed onto the nearest chair, buried her head in her arms and sobbed hot tears onto the kitchen table.
“What will happen to Daddy?”

The mother collected her daughter into her arms. “They will send him to a labour camp. That means he will have to work very, very hard. He won’t come back home until after this war is all over.”

“Yes, yes of course it will. But tomorrow I am going to take you to stay with Auntie Rose. And you will use your second name “Maria”. I don’t want them to think you are a Jew. It would not be good for you to go to a labour camp too.”

“When will I come home?”

Woodenly Helga moved through the evening rituals. Setting out the milk in the cool side room so that she could skim the cream off in the morning; preparing and serving the evening meal; seeing Esther-Marie bathed and changed and tucked into bed.

At last the mother lay in the big, empty double bed staring wide-eyed into the darkness. The rain drummed onto the bedroom window and the wind howled. Something flapped in the wind. Her mind was playing tricks. The flapping sounded like the familiar tread of her husband’s boots on the path. A sound I may never hear again, she thought to herself. And the rain against the window – it could almost be someone tapping gently.

It is someone tapping!

Helga jumped out of bed and opened the window of the room, letting in a gust of wind and rain. Willhelm was there!

“Let me in, old girl!” He was wet through and covered with mud. Helga wrestled the window to, latched it and raced, barefoot, to the kitchen door.

She opened it to an almost unrecognisable, mud-covered apparition.

Without speaking she moved to the stove and built up the fire, then fetched the laundry tub, towels and dry clothes. Neither spoke while Helga poured water for a bath, refilled the kettle and set it over the fire for tea.

Not until he was clean, warm and dry and settled to a hot drink and food did she finally give vent to her curiosity.

“What happened? How did you get away?”

“That was your doing, my darling wife!” He looked up from his food with a grin.

“My doing? I couldn’t do a thing. Not even warn you that he was here.”

“Well, we left here with him prodding me in the back with that rifle. We sloshed through the rain until we came to the narrow part of the track with the wood on one side and the corn field on the other. There he poked me hard in the back and said, ‘Go!’

“I didn’t understand what he meant and turned to face him. He had the strangest expression on his face. Puzzled, perhaps, as if he did not understand himself what was happening. ‘Go!’ he said, ‘just go!’

“‘Anywhere you can hide. Don’t let them find you.’

“I didn’t believe it. I thought if I took off he would shoot me in the back.

“And then he turned his back and walked away down the road. When he had disappeared into the rain, I walked into the cornfield and lay down in the mud between the dead corn stalks. I stayed until I was sure Esther would be asleep. She mustn’t know that I have not been sent away. She never was able to tell a convincing lie.”

“I’m taking her to my sister’s place in the morning. It will be safer for her there. I have already told her. And she must be called Maria.”

“Good. There she will be just one of a big catholic family. And I will be safer here with Esther away. I will be able to hide in the hay in the barn. The farm work will be up to you.”

After the Germans retreated from Hungary, the Russians came. Esther was brought home from her aunt’s place and her father joined the communist party. By taking a job for the government he was able to keep his family safe. But twelve years later the people rose against the ruling Soviets. Esther Marie, then a young woman of twenty, decided she had had enough of war and one night waded waist deep through a swamp to escape across the border.

She eventually came to Australia where she lives peacefully today.