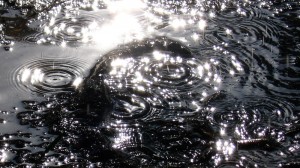 When the earth was sick and the skies were gray,
And the woods were rotted with rain,
The Dead Man rode through the autumn day
To visit his love again.

Far back in the “seventies,” before they had built any Public Offices at Simla, and the broad road round Jakko lived in a pigeon-hole in the P. W. D. hovels, her parents made Miss Gaurey marry Colonel Schriederling. He could not have been MUCH more than thirty-five years her senior; and, as he lived on two hundred rupees a month and had money of his own, he was well off. He belonged to good people, and suffered in the cold weather from lung complaints. In the hot weather he dangled on the brink of heat-apoplexy; but it never quite killed him.

Understand, I do not blame Schriederling. He was a good husband according to his lights, and his temper only failed him when he was being nursed. Which was some seventeen days in each month. He was almost generous to his wife about money matters, and that, for him, was a concession. Still Mrs. Schreiderling was not happy. They married her when she was this side of twenty and had given all her poor little heart to another man. I have forgotten his name, but we will call him the Other Man. He had no money and no prospects. He was not even good-looking; and I think he was in the Commissariat or Transport. But, in spite of all these things, she loved him very madly; and there was some sort of an engagement between the two when Schreiderling appeared and told Mrs. Gaurey that he wished to marry her daughter. Then the other engagement was broken off—washed away by Mrs. Gaurey’s tears, for that lady governed her house by weeping over disobedience to her authority and the lack of reverence she received in her old age. The daughter did not take after her mother. She never cried. Not even at the wedding.

The Other Man bore his loss quietly, and was transferred to as bad a station as he could find. Perhaps the climate consoled him. He suffered from intermittent fever, and that may have distracted him from his other trouble. He was weak about the heart also. Both ways. One of the valves was affected, and the fever made it worse. This showed itself later on.

Then many months passed, and Mrs. Schreiderling took to being ill. She did not pine away like people in story books, but she seemed to pick up every form of illness that went about a station, from simple fever upwards. She was never more than ordinarily pretty at the best of times; and the illness made her ugly. Schreiderling said so. He prided himself on speaking his mind.

When she ceased being pretty, he left her to her own devices, and went back to the lairs of his bachelordom. She used to trot up and down Simla Mall in a forlorn sort of way, with a gray Terai hat well on the back of her head, and a shocking bad saddle under her. Schreiderling’s generosity stopped at the horse. He said that any saddle would do for a woman as nervous as Mrs. Schreiderling. She never was asked to dance, because she did not dance well; and she was so dull and uninteresting, that her box very seldom had any cards in it. Schreiderling said that if he had known that she was going to be such a scare-crow after her marriage, he would never have married her. He always prided himself on speaking his mind, did Schreiderling!

He left her at Simla one August, and went down to his regiment. Then she revived a little, but she never recovered her looks. I found out at the Club that the Other Man is coming up sick—very sick—on an off chance of recovery. The fever and the heart-valves had nearly killed him. She knew that, too, and she knew—what I had no interest in knowing—when he was coming up. I suppose he wrote to tell her. They had not seen each other since a month before the wedding. And here comes the unpleasant part of the story.

A late call kept me down at the Dovedell Hotel till dusk one evening. Mrs. Schreidlerling had been flitting up and down the Mall all the afternoon in the rain. Coming up along the Cart-road, a tonga passed me, and my pony, tired with standing so long, set off at a canter. Just by the road down to the Tonga Office Mrs. Schreiderling, dripping from head to foot, was waiting for the tonga. I turned up-hill, as the tonga was no affair of mine; and just then she began to shriek. I went back at once and saw, under the Tonga Office lamps, Mrs. Schreiderling kneeling in the wet road by the back seat of the newly-arrived tonga, screaming hideously. Then she fell face down in the dirt as I came up.

Sitting in the back seat, very square and firm, with one hand on the awning-stanchion and the wet pouring off his hat and moustache, was the Other Man—dead. The sixty-mile up-hill jolt had been too much for his valve, I suppose. The tonga-driver said:—”The Sahib died two stages out of Solon. Therefore, I tied him with a rope, lest he should fall out by the way, and so came to Simla. Will the Sahib give me bukshish? IT,” pointing to the Other Man, “should have given one rupee.”

The Other Man sat with a grin on his face, as if he enjoyed the joke of his arrival; and Mrs. Schreiderling, in the mud, began to groan. There was no one except us four in the office and it was raining heavily. The first thing was to take Mrs. Schreiderling home, and the second was to prevent her name from being mixed up with the affair. The tonga-driver received five rupees to find a bazar ‘rickshaw for Mrs. Schreiderling. He was to tell the tonga Babu afterwards of the Other Man, and the Babu was to make such arrangements as seemed best.

Mrs. Schreiderling was carried into the shed out of the rain, and for three-quarters of an hour we two waited for the ‘rickshaw. The Other Man was left exactly as he had arrived. Mrs. Schreiderling would do everything but cry, which might have helped her. She tried to scream as soon as her senses came back, and then she began praying for the Other Man’s soul. Had she not been as honest as the day, she would have prayed for her own soul too. I waited to hear her do this, but she did not. Then I tried to get some of the mud off her habit. Lastly, the ‘rickshaw came, and I got her away—partly by force. It was a terrible business from beginning to end; but most of all when the ‘rickshaw had to squeeze between the wall and the tonga, and she saw by the lamp-light that thin, yellow hand grasping the awning-stanchion.

She was taken home just as every one was going to a dance at Viceregal Lodge—”Peterhoff” it was then—and the doctor found that she had fallen from her horse, that I had picked her up at the back of Jakko, and really deserved great credit for the prompt manner in which I had secured medical aid. She did not die—men of Schreiderling’s stamp marry women who don’t die easily. They live and grow ugly.

She never told of her one meeting, since her marriage, with the Other Man; and, when the chill and cough following the exposure of that evening, allowed her abroad, she never by word or sign alluded to having met me by the Tonga Office. Perhaps she never knew.

She used to trot up and down the Mall, on that shocking bad saddle, looking as if she expected to meet some one round the corner every minute. Two years afterward, she went Home, and died—at Bournemouth, I think.

Schreiderling, when he grew maudlin at Mess, used to talk about “my poor dear wife.” He always set great store on speaking his mind, did Schreiderling!