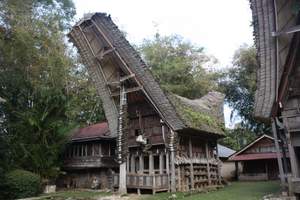 The progenitors of the Toraja people of Sulawesi reputedly came from the south, by boat against the current to reach the north side of Tana Toraja. For this reason, a traditional Toraja house always points to the north, otherwise it will bring death, and its roof has the form of an upside-down boat. Similarly, for the Toraja who has died, the head should always face south, while those who are living must sleep facing north.

According to legend, Lord Tamboro Langi’ Tomanurung fell from the heavens onto Mengkendek, which is a peak of the Kandora mountain, in the middle of the 4th century. He at once became the first king of the Torajan and the ancestor of the kings in Tana Toraja.

The Toraja are an ethnic group indigenous to a mountainous region of South Sulawesi, Indonesia. Their population is approximately 1,100,000, of whom 450,000 live in the regency of Tana Toraja. Most of the population is Christian, and others are Muslim or have local animist beliefs known as aluk.

Before the 20th century, Torajans lived in autonomous villages, where they practised animism and were relatively untouched by the outside world. Nobles, who were believed to be direct descendants of Lord Tamboro Langi’ Tomanurung , lived in tongkonans, while commoners lived in less lavish houses, bamboo shacks called banua.

Slaves in Toraja society were family property. Sometimes Torajans decided to become slaves when they incurred a debt, pledging to work as payment. Slaves could be taken during wars, and slave trading was common. Slaves could buy their freedom, but their children still inherited slave status. Slaves were prohibited from wearing bronze or gold, ornamenting their houses with carvings, eating from the same dishes as their owners, or having sex with free women – a crime punishable by death.

In Toraja society, the funeral ritual is the most elaborate and expensive event. The richer and more powerful the individual, the more expensive is the funeral. In the aluk religion, only nobles have the right to have an expensive death feast.

A component of the ritual is the slaughter of water buffalo. The more powerful the person who died, the more buffalo are slaughtered at the death feast. Buffalo carcasses, including their heads, are usually lined up on a field waiting for their owner, who is in the “sleeping stage”.

Also, Torajans perform dances on several occasions, most often during their elaborate funeral ceremonies. They dance to express their grief, and to honour and even cheer the deceased person because he is going to have a long journey in the afterlife.

A prominent attribute of the Toraja language is the notion of grief. The importance of the death ceremony in Toraja culture is reflected in the fact that their language can express intricate degrees of grief and mourning. The Toraja language contains many terms referring to sadness, longing, depression, and mental pain. Giving a clear expression of the psychological and physical effect of loss is a catharsis and sometimes lessens the pain of grief itself.

Tana Toraja is described in ancient literature as “Tondok Lepongan Bulan Tana Matari’ Allo” which means a place where the government and the whole society unite like the sun and the moon.

From the 17th century, the Netherlands built up trade and political power in Sulawesi through the Vereenigde Oost-indische Compagnie (VOC). For two centuries, they ignored the highlands of South Sulawesi, where the Toraja live, because of the difficulty of access and the lack of agricultural potential. 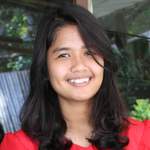 Winn Jeanet is an Indonesian writer who was born in 1997 in Palu, Central Sulawesi. At the age of three, she moved with her parents and brother Jeremy to South Sulawesi, where she is currently a student of natural science. Winn has been writing stories since she was ten years old and she also writes songs and makes videos. Some of the latter are to be found on YouTube.