The Appointment in Samarra 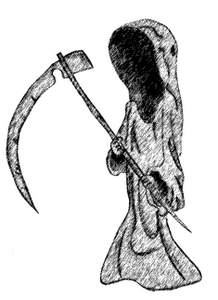 Once, many, many years ago, when the world was a very different place, a rich merchant lived in the city of Baghdad. One day, the merchant decided to hold a feast for his friends so he sent for his most trusted servant.

“Ahmed,” he said. “I want you to go to the market place and search for food and drink that will astound and delight my guests when they come to dine with me tonight. Buy only the finest produce. My friends will expect nothing less than the best.”

Ahmed bowed and hurried off but he wasn’t looking forward to his task. The day was hot and he knew the market place would be filled with bustling crowds. He was right. People were pushing and shoving each other to get at the best bargains. Ahmed sighed and plunged into the seething mass of humanity.

Suddenly, he felt a hand tug at his sleeve. Ahmed frowned and turned to see who it was. To his horror, a face he had hoped never to see stared at him. Ahmed gasped in fear and took to his heels.

He raced back to his master’s house and burst into the room where the merchant was counting his money. The merchant looked up in surprise. “You’re back soon,” he said. “I expected you to be hours yet. I hope you haven’t just bought the first things you saw.”

“I haven’t bought anything,” replied Ahmed.

The merchant frowned. “Why ever not?” he asked angrily. “You had better have a good reason for disobeying me.”

“I do, said Ahmed in a very shaky voice.

“Well, tell me what it is,” said the merchant. “And be quick about it.”

“I went to the market place as you ordered,” said Ahmed. “But when I was there someone grabbed hold of my sleeve and pulled on it.”

“Well, that was a bit rude of them I suppose,” said the merchant. “But surely it was no reason for you to come running home.”

“Oh yes it was,” replied Ahmed, “because the creature that grabbed me was Death herself!”

“No!” gasped the merchant.

“Yes!” said Ahmed. “And Death glared at me in a most horrible way. I was terrified!”

“Of course you were,” said the merchant, “you poor man.”

“Quite right too,” agreed his master.

“Look,” said Ahmed, “I can’t stay here now. Please lend me a horse and I’ll ride to Samarra and hide at my friend’s house. It’s the perfect solution. Death will never find me there.”

“That’s a good idea,” said the merchant. “Take the horse and go immediately. You’ll be safe in Samarra, it’s miles from Baghdad.”

Ahmed saddled up the merchant’s swiftest horse and galloped off to Samarra without further delay.

After he was gone, the merchant decided to go to the market place. He was angry with Death. “Ahmed was my best and most trusted servant,” he said to himself, “Death had no right to scare him.”

The merchant strode into the market and sure enough he soon spotted Death standing by herself in a shadowy corner.

He marched up to the creature and said in a very firm voice, “Hey, I want a word with you.”

Death turned to the merchant and said in a voice as cold as the north wind in winter, “What do you want with me, mortal?”

“Well,” said the merchant, “I want to know why you frightened my servant this morning. You had no right to glare at him.”

“I didn’t glare at him,” replied Death, “the look I gave him was one of surprise.”

The merchant was puzzled. “Why were you surprised to see my servant Ahmed?”

“Because,” replied Death, “I didn’t expect to see him here in Baghdad. You see I have an appointment with him tonight at his friend’s house in Samarra!”