The Story of Tuan mac Cairill 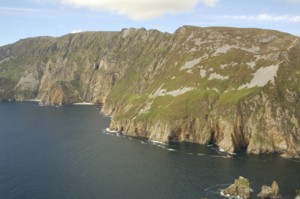 Finnian, the Abbott of Moville, went southwards and eastwards in great haste. News had come to him in Donegal that there were yet people in his own province who believed in gods that he did not approve of, and the gods that we do not approve of are treated scurvily, even by saintly men.

He was told of a powerful gentleman who observed neither Saint’s day nor Sunday.

“We shall try this person’s power,” said Finnian.

“He is reputed to be a wise and hardy man,” said his informant.

“We shall test his wisdom and his hardihood.”

“He is,” that gossip whispered—”he is a magician.”

“I will magician him,” cried Finnian angrily. “Where does that man live?”

He was informed, and he proceeded to that direction without delay.

In no great time he came to the stronghold of the gentleman who followed ancient ways, and he demanded admittance in order that he might preach and prove the new God, and exorcise and terrify and banish even the memory of the old one; for to a god grown old Time is as ruthless as to a beggarman grown old.

But the Ulster gentleman refused Finnian admittance. He barricaded his house, he shuttered his windows, and in a gloom of indignation and protest he continued the practices of ten thousand years, and would not hearken to Finnian calling at the window or to Time knocking at his door.

But of those adversaries it was the first he redoubted.

Finnian loomed on him as a portent and a terror; but he had no fear of Time. Indeed he was the foster-brother of Time, and so disdainful of the bitter god that he did not even disdain him; he leaped over the scythe, he dodged under it, and the sole occasions on which Time laughs is when he chances on Tuan, the son of Cairill, the son of Muredac Red-neck.

Now Finnian could not abide that any person should resist both the Gospel and himself, and he proceeded to force the stronghold by peaceful but powerful methods. He fasted on the gentleman, and he did so to such purpose that he was admitted to the house; for to an hospitable heart the idea that a stranger may expire on your doorstep from sheer famine cannot be tolerated. The gentleman, however, did not give in without a struggle: he thought that when Finnian had grown sufficiently hungry he would lift the siege and take himself off to some place where he might get food. But he did not know Finnian. The great abbot sat down on a spot just beyond the door, and composed himself to all that might follow from his action. He bent his gaze on the ground between his feet, and entered into a meditation from which he would Only be released by admission or death.

Often the gentleman would send a servitor to spy if that deserter of the gods was still before his door, and each time the servant replied that he was still there.

“He will be gone in the morning,” said the hopeful master.

On the morrow the state of siege continued, and through that day the servants were sent many times to observe through spy-holes.

“Go,” he would say, “and find out if the worshipper of new gods has taken himself away.”

But the servants returned each time with the same information.

“The new druid is still there,” they said.

All through that day no one could leave the stronghold. And the enforced seclusion wrought on the minds of the servants, while the cessation of all work banded them together in small groups that whispered and discussed and disputed. Then these groups would disperse to peep through the spy-hole at the patient, immobile figure seated before the door, wrapped in a meditation that was timeless and unconcerned. They took fright at the spectacle, and once or twice a woman screamed hysterically, and was bundled away with a companion’s hand clapped on her mouth, so that the ear of their master should not be affronted.

“He has his own troubles,” they said. “It is a combat of the gods that is taking place.”

So much for the women; but the men also were uneasy. They prowled up and down, tramping from the spy-hole to the kitchen, and from the kitchen to the turreted roof. And from the roof they would look down on the motionless figure below, and speculate on many things, including the staunchness of man, the qualities of their master, and even the possibility that the new gods might be as powerful as the old. From these peepings and discussions they would return languid and discouraged.

“If,” said one irritable guard, “if we buzzed a spear at the persistent stranger, or if one slung at him with a jagged pebble!”

“What!” his master demanded wrathfully, “is a spear to be thrown at an unarmed stranger? And from this house!” And he soundly cuffed that indelicate servant.

“Be at peace all of you,” he said, “for hunger has a whip, and he will drive the stranger away in the night.”

The household retired to wretched beds; but for the master of the house there was no sleep. He marched his halls all night, going often to the spy-hole to see if that shadow was still sitting in the shade, and pacing thence, tormented, preoccupied, refusing even the nose of his favourite dog as it pressed lovingly into his closed palm.

On the morrow he gave in.

The great door was swung wide, and two of his servants carried Finnian into the house, for the saint could no longer walk or stand upright by reason of the hunger and exposure to which he had submitted. But his frame was tough as the unconquerable spirit that dwelt within it, and in no long time he was ready for whatever might come of dispute or anathema.

Being quite re-established he undertook the conversion of the master of the house, and the siege he laid against that notable intelligence was long spoken of among those who are interested in such things.

He had beaten the disease of Mugain; he had beaten his own pupil the great Colm Cille; he beat Tuan also, and just as the latter’s door had opened to the persistent stranger, so his heart opened, and Finnian marched there to do the will of God, and his own will.

One day they were talking together about the majesty of God and His love, for although Tuan had now received much instruction on this subject he yet needed more, and he laid as close a siege on Finnian as Finnian had before that laid on him. But man works outwardly and inwardly. After rest he has energy, after energy he needs repose; so, when we have given instruction for a time, we need instruction, and must receive it or the spirit faints and wisdom herself grows bitter.

Therefore Finnian said: “Tell me now about yourself, dear heart.”

But Tuan was avid of information about the True God. “No, no,” he said, “the past has nothing more of interest for me, and I do not wish anything to come between my soul and its instruction; continue to teach me, dear friend and saintly father.”

“I will do that,” Finnian replied, “but I must first meditate deeply on you, and must know you well. Tell me your past, my beloved, for a man is his past, and is to be known by it.”

But Tuan pleaded: “Let the past be content with itself, for man needs forgetfulness as well as memory.”

“My son,” said Finnian, “all that has ever been done has been done for the glory of God, and to confess our good and evil deeds is part of instruction; for the soul must recall its acts and abide by them, or renounce them by confession and penitence. Tell me your genealogy first, and by what descent you occupy these lands and stronghold, and then I will examine your acts and your conscience.”

Tuan replied obediently: “I am known as Tuan, son of Cairill, son of Muredac Red-neck, and these are the hereditary lands of my father.”

“I am not as well acquainted with Ulster genealogies as I should be, yet I know something of them. I am by blood a Leinsterman,” he continued.

“Mine is a long pedigree,” Tuan murmured.

Finnian received that information with respect and interest.

“I also,” he said, “have an honourable record.”

“But,” said Finnian in bewilderment, “there is an error here, for you have recited two different genealogies.”

“Different genealogies, indeed,” replied Tuan thoughtfully, “but they are my genealogies.”

“I do not understand this,” Finnian declared roundly.

“The brother of Partholon,” the saint gasped.

“That is my pedigree,” Tuan said.

“But,” Finnian objected in bewilderment, “Partholon came to Ireland not long after the Flood.”

“I came with him,” said Tuan mildly.

The saint pushed his chair back hastily, and sat staring at his host, and as he stared the blood grew chill in his veins, and his hair crept along his scalp and stood on end.