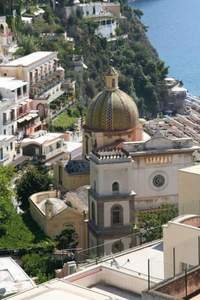 The vertical fishing village of Positano, on Italy’s Amalfi coast, is known as ‘Scalinatelli’, the Kingdom of Little Steps. It is the beginning of a truly beautiful coastline which stretches from the Sorrentine Peninsular to the Gulf of Salerno.

Lush, Mediterranean bush vibrantly adorns the rocky cliffs. The brilliance of the vegetation against pastel buildings overlooking the turquoise sea signals the beginning of a truly magical interlude. The charming pensiones and cottages are mainly of the Moorish type with flat roofs and balconies beneath arcades. Almost every dwelling or hotel has a sea view.

Most tourists arrive from Sorrento by bus, having left Naples by train or ferry, both of which cost approximately 10 euros. Alighting above this cliff-hugging hamlet, one gasps at the spectacular vista and immediately reaches for the camera to record first impressions of such an enchanting town.

Descending through the village with all the senses alert and absorbing the local chatter, there are myriad unique corners at every twist and turn. As you meander, you will doubtless indulge in the Italian pursuit of buying typical local food, such as interesting salamis, cheeses and the sweetest cherry tomatoes you could ever come across. Eating as you go, little alleys and steps will take you to the waterfront, past colourful boutiques exhibiting the lively and fresh ‘Positano fashion’ as it is known. The town is famous for its hand-made goods and boasts artisan’s shops and craft studios, particularly those producing gaily decorated pottery. Walk along the pebbled beach of Fornillo and discover, among the shiny black stones, ceramic remnants washed down from the cliff side cottages and studios of craftsmen over the years.
Restaurants faithful to local fare are plentiful. This includes of course seafood, white-pressed mozzarella cheese made from buffalo milk and wines of the area There are mouth-watering delicatessens and small eateries and, for something different, dine at the restaurnt at Monte Pertuso, situated in a tiny village far above the sea – they will send a car to collect you.

There are archaeological and artistic treasures to be found around Positano, such as three 16th century defence towers along the beach, the ruins of a Roman villa, cultivated terraces and, close to the main road, a cave in which remains from the Paleolithic Era have been found – this is the Grotta la Porta. The Cathedral of Maria Assumpta with its imposing majolica dome can be seen from any point in the village. With an elegant and simple interior bathed in golden light, it houses Renaissance works of art and sculpture.

Take a day-trip on a local bus and follow the sea to Amalfi, passing picturesque old fishing hamlets such as Praiano and Conca dei Marini. From the bus window you at first watch in horrified fascination as buses going in the opposite direction inch past on this boldly-sited, winding road. The faces of passing passengers mirror your own! The drivers continually sound their musical horns as each bend is approached, however the constantly changing views overcome any nervousness and you are soon marvelling at fantastically shaped rocks plunging into a crystal sea, deep gorges, and off-shore islands.

Ferry excursions to the Isle of Capri are available daily. Known as the ‘island of dreams’, Capri was formerly a playground of Roman Emperors. It is honey-combed with fairy grottoes, the most spectacular being the Blue Grotto which is lit through the water by refracted light, giving it a wonderful blue colour. The word ‘divine’ has often been used to describe the Amalfi coast – it is after all the region where ancient sailors were lured by the Sirens!
If hiking is your forte, explore nearby areas such as the little village of Nocelle, two kilometres away, which can be accessed only on foot. Likewise the Ponte dei Libri, spanning a mysterious valley, or the summit of St. Angelo ai Tre Pizzi; a stay in this mountainous region will certainly tone up your leg muscles!

Positano offers the traveller the opportunity to partake in various festivals and cultural events throughout the year, such as painting competitions, a music festival and dancing exhibitions. On any night of the week you can go night-clubbing in a cave! A short walk along the the beach and up a few steps among the rocks and you are in Le Terrezza with its misty light and interesting bands.

On weekdays there are fewer tourists, so there is not the bustle and push which you may encounter at week-ends when the city-dwellers descend for respite from the working week. At the height of the tourist season you would need to book ahead to ensure a room but, at other times, you need simply arrive and take your time to investigate the many and varied types of accommodation. Sorrento is larger and more well known than Positano but, like many places, the ‘little town just around the bend’ is often a secret just waiting to be discovered.