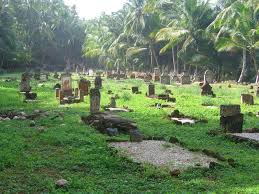 My transfer from Nairobi to the coastal city of Mombasa, whose fame rests on vices rather than virtues, opened my eyes to a completely new understanding of the paranormal and the bizarre.

I had served as a manager with the well-regarded Clean Sheen Paints Company, in three different upcountry towns and over a period spanning six years. Along the way, I had gained rank and esteem and developed a generous measure of effusive pride.

Being a staunch Christian with kind parents who did a superb job on my upbringing, I had never believed in ghosts, known as jinni in Swahili. That they could change from their form – whatever it is – into beautiful girls was, to me, the invention of idle busybodies. There was one laughable idea that some shops did not need to have attendants, rather they were manned by cats who watched people’s every step, lest anyone stole. Pure baloney! Six months into my posting, I was yet to encounter a feline shopkeeper.

I had overheard my Uncle Josses Karwaki, a prolific storyteller, relate epics about nubile belles who turned goat-legged in bed, or about unfortunate lovers who woke up atop coconut trees, stark naked. Being a ladies’ man -not a womanizer but a knight in sexual armour – and a sucker for damsels in distress, I always have half-fearfully wished to meet a sprite.

As a matter of proper introduction, my name is Shadrack Kaborro, though friends call me ‘Shady’. In my day-to-day occupation, I drive around the coastal county, soliciting orders for our high-priced and standard gloss paints – fifty six different shades, engaging in only minor corruption and making friends and foes in equal measure.

Our supposedly prestigious company, squeezed between the disused railway carriages and a seedy godown in the vast Shimanzi area, is a stone’s throw from the main gate of the Mombasa port. As boss of my department, I selfishly opt for the most lucrative routes – the beach hotels at South Coast, say, the only hindrance being the overworked and disorganised Likoni ferry. North Coast too has its share of resorts, if you do not mind the long drive past Mtwapa Town. Here, I get to sample foreign dishes, wines and lasses, not necessarily in that order.

Everything changed on Monday, precisely a fortnight ago.

As usual, I had allotted myself a valuable order at the Sun N’ Sand beach hotel. It would earn me bonus points and a handsome commission. Maybe I would also see a few of the tourists in their tiny bikinis. A wink, my killer smile, a smattering of Italian and passable German would do the trick.

More than that, I had a major hangover, which I chose to ignore as I drove out of the office compound, the windscreen wipers sweeping off the steady drizzle in the sunny, funny weather.

I rightly ignored the policeman directing the traffic at Makupa roundabout. At Saba-Saba I turned left, the stadium and Buxton Estate to my right, Mombasa Polytechnic to the left. By the time I was crossing Nyali Bridge, the drizzle had turned to rain and the sky was dark, the sun reluctantly disappearing under the impending clouds. For once, the traffic lights at the Kongowea-Mkomani junction were working. Matatus – minibuses from Kisauni – had blocked the road at the turning to Makaburini, the largest cemetery in Mombasa, visible from the road and with the sparse coconut trees dancing macabre.

This headache will kill me, I thought glumly, noticing too that the traffic was thinning past Shanzu Teachers’ College.
It was then that I saw her, standing by the roadside. Being a charitable man and a top-notch motorist, I stopped, leaned over and opened the passenger door.

She was soaked to the bone and I watched the little hairs on her bare arms bristle in the warmth of the car. Her heaving bosom fascinated me. She smiled. She had the most beautiful smile I ever saw. Her nose was dainty, her lips were generous and her eyes sexy.

“Thank you,” she said in an almost inaudible voice, her Swahili authentically coastal.

“Home, I was visiting my aunt,” she said in her musical voice and shrugged, “I didn’t guess the weather would turn nasty”

As I told you earlier, I have a way with girls and, mark you, I am single, sane and satisfied. By the time we arrived at her purported destination, some seven or so miles on, we were chatting like old friends. Near her gate, we sat in the car for close to an hour, waiting for the rain to abate, becoming better acquainted, even exchanging a couple of wet kisses. She invited me to her birthday party the following Saturday, promising that we would plan for a proper date then.

The rain was relentless and, being a noble man, I offered Sofia my brown suede jacket. I would collect it on Saturday. Only when she was disappearing behind the imposing gate with a wave did I remember regretfully that I had not asked for her cellphone number – blame it on the excitement of the moment. Needless to say, my headache disappeared and I got three more orders after the Sun N’ Sand. Sofia sure had made my day.

I had my car washed on the Friday evening. It gleamed proudly just like its owner. I timed it so that I would arrive between three thirty and four in the afternoon, the core hours of any daytime party.

I honked at the gate, which a blustery stripling opened, evidently high on something not alcoholic. I parked outside the chalk-white house which, from its design and extravagant construction, had obviously been built in the early nineteenth century. Coconut fronds rustled against the rusting roof.

Besides the youngster, I saw an old man, most likely the father of the home. There were also two smaller children, likely twins, a teenage girl and a man of indeterminate age in a wheelchair, with piddle-ridden lips. One thing I could tell however, there was no birthday party. I was mystified, and failed to understand the girl Sofia’s apparent hoax.

“Good afternoon to you. Welcome.” The patriarch replied to my greetings with no forced courtesy. He turned to the girl. “Bring a stool for the visitor.”

She obliged, but I did not take the offered seat decorated in seashells. I cleared my throat in a most theatrical embarrassment, best left to suitors nabbed in a compromising position.

“Um…I wanted to see Sofia… she told me I’ll find her at home. I mean…”

“You want to see who?” the old man barked, even as I noticed the alarmed – no, strange – way they were all staring at me. It was weird and I felt myself shiver involuntarily. I noticed too that the invalid seemed to grin.

“Sofia Hassan… we met and…she invited me to her birthday party, today,” I explained, training my eyes on the old man bravely.

The man in the wheelchair let out a horrendous laugh and, suddenly, the breeze seemed stifled in evil. The girl and the children disappeared into the house. The lower lip of the dream-struck boy, who had opened the gate for me, dropped in a most unflattering fashion.

“When were you with her?” the old man continued cautiously, eyes narrowing, a resemblance to the Sofia I had met quite uncanny.

He shook his fez-donned head dolefully.

“She is dead. A whole year now,” the junkie lad interrupted, his voice falsetto, most likely a side effect of heroin, while flopping heavily onto the stool meant for me.

“Can’t be, I saw…” I started to protest, and then clammed up.

“If you see her photograph, would… would you recognize her?” the father asked, helpfully.

“Yes of course, I would,” I replied confidently. My lower lip trembled, ditto my legs.

“Bring the photo album from my box…Amina!” He shouted the instructions to the teenage girl, who was peeking out of the window. There was an ominous feel to the moment.

I identified her in the third photo, together with the dork son, apparently then normal and smiling to the camera, and the girl Amina. The fifth and the sixth photos too were of my beautiful girl whom I had met last Monday, Sofia Hassan!

“Today marks…her first anniversary since we buried her. She was a nice girl, an obedient daughter and a brilliant trainee marine engineer,” he paused, “I remember… so well… the news… devastated her mother. She had been diagnosed with high blood pressure… could not take the shock. She died a month and a half later.” the old man spoke clearly, yet sadly, wiping wisps of tears from the sides of his eyes with the back of his palm.

“She was my second born, after him,” he said, indicating the wheelchair-bound man. “After her is…came Ishmael, Amina and then the twins. It was an accident you see… a scooter accident. He was riding” he said pointing to the man in the wheelchair again, “Sofia, his jolly passenger. They did not have helmets. It was up… up Maweni slope. The brakes of the truck that hit them didn’t work…

“Ever since Sofia’s death…this, her younger brother has turned to funny substances. Nevertheless, I am sure he can guide you to… to Sofia’s grave if you wish…eh…Ishmael, take our visitor to Makaburini. I can see you don’t… he doesn’t believe me…us.”

It was more a command, than a request. I nodded. The only way to believe my date was a spectre would be to read her epitaph. From the side mirror, I espied the sad old man, a heartbroken father with tender memories rekindled watching us depart.

The inane brother did not say much as we drove to Makburini, except for bumming a cigarette off me. Most of the tombstones were weathered and worn, some overgrown with grass and weeds, while others were carefully tended with inscriptions still legible. The narrow paths divided unevenly the final resting places of departed souls.

“There… that’s where we interred our Sofia.”

Amazingly, young Ishmael was now coherent, changed from his ‘out-of-world’ persona, pointing. I shaded my eyes from the glare of the afternoon sun and looked at the tombstone he indicated, well tended, roses in bloom. On it, hung my precious brown suede jacket.

Ed – Rutere Mutuanga is a Kenyan writer of short stories and poems. He lives in Embu County, on the lower slopes of Mount Kenya. His other short stories include The Circle Is Always Round, The Last Born and Love In the Line of Duty. His poems include Soothsayer, Divorce and The Padre as Edwin Rutere, all available on PoemsClub.com.