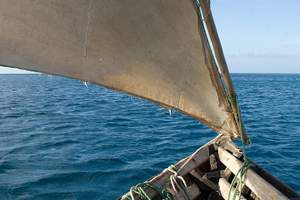 The sun was at its zenith when Ali made the turn from the Mombasa channel toward the open Indian Ocean. The sun’s heat added to his annoyance as he pulled on the lines to try and catch as much of the breeze as possible, to gain an additional knot of speed. His efforts were rewarded as he noticed the triangular canvas of the lateen being stretched further as more wind was trapped against its surface. The dhow’s hull seemed to respond as if an invisible hand suddenly pushed it a bit harder through the water. Ali felt the smile begin to stretch the wrinkles around his weather-beaten face.

“Father! Look, there are dolphins!”

He turned to look at his son, Malik, who rushed to the bow and pointed off to the right.

He felt excitement fill his heart as he spied the magnificent sight of dozens of flashes of blue and grey bodies streaking across the surface. It seemed that they moved at will and the water just slid off their sleek forms as if they were glass – unlike the dhow Ali was piloting, which seemed to struggle at times to overcome the resistance of the sea, despite its gracefully curved form.

Malik was Ali’s youngest son and was joining him for the first time. The boy was only twelve but he seemed to take to the sea as if he had always been on a ship, unlike his three brothers who would have nothing to do with the ocean except to spy it from a sandy beach or occasionally splash in the shallow tidal areas. At least there might be one offspring who would carry on the seafaring tradition of Ali’s family, a tradition that spanned at least a hundred years. His grandfather once said that their ancestors had even come from as far away as the waters of the Persian Gulf.

“Jump!” said Malik to the dolphins.

He burst into laughter as several young dolphins popped above the surface in response to his call. He turned to look at Ali as if to share this moment of joy with his father. His father smiled back. This is why I enjoy the sea. I am fortunate to have inherited it from my ancestors before me, and thank God, he thought.

The afternoon crept on as the sun made its slow journey to the west, toward the heart of the continent. The gentle wind and the movement of the ship seemed to enhance the perfection of the day. Ali spent that time minding the direction of the dhow while trying to answer the endless stream of questions from his son.

“What makes the wind go in a certain direction?”

“How fast are we moving?”

“How do you know where you’re going?”

Ali answered each question as if it were the first one asked and not the fifteenth. He was so preoccupied with his son that he almost failed to notice the gradual darkening of the clouds. He blinked in surprise when the wind suddenly veered, which he knew indicated the approach of bad weather. Still, he was not greatly concerned. He had endured countless storms in his years at sea. He only wondered how Malik might handle it.

He shouted orders to his small crew to begin preparing the dhow for bad weather. He then turned to Malik. The boy seemed to sense the change in atmosphere. A worried look replaced the bright smile and laughter from earlier in the day.

“Don’t worry son. I’m sure we will have some rain and a little wind. Our boat is very well made and we have a good crew here,” he said.

The boy nodded and a brief smile creased his face. That brief smile gave Ali some strength. He used it to begin helping his crew to ready the cargo for anything the storm might bring. It seemed there were so many things to do when one is rushed to do something on a ship. It is the details which become so important.

While he was tightening the lines to the crates lashed to the deck, the wind had momentarily died down. The absence of wind was what made Ali stop what he was doing to look at the sky. He craned his neck to look and froze in shock at the amazing sight of beauty and horror. The dark clouds seemed to be swirling in a vortex directly above his seemingly tiny ship. It reminded him of his wife pouring dark soup down the sink, which he would watch swirl around as it slipped into the drain. Except now the activity was flipped upside down and multiplied many times over. As he watched, the center seemed to form into a cylinder which began to extend downward, like a finger of God, straight for his dhow. In the back of his rational mind, he realized what he was looking at. Something that many mariners called a “water spout”, or a tornado that strikes over water. Malik just stood still in this chaos, his mouth wide as were his eyes, as he stared at the water spout as it quickly descended.

The funnel struck with blinding fury and it was as if a wall of rain swept the ship. The noise was incredible as Ali felt himself being pinned to one side of the deck. The water droplets stung like wasps as they struck his face and body. He screamed for Malik. For his crew. For God. He barely made out the shape of the boom as it swung around and carried a small body overboard. Malik, he thought.

Almost as soon as it started it was over, and he was alone. The deck of the dhow was a shambles. It was as if a giant hand had smashed a fist on top of his ship. He blinked away the water that dripped into his eyes. He was still alive. He then remembered what had happened

Ali ran across the deck, jumping over objects strewn about it, and looked over the railing. He cried out again for his young boy. Tears of frustration and fear began to mix with the rain water that dripped into his eyes. He felt his legs weaken and buckle. He suddenly felt sick. His youngest was gone. Why? he thought. What had he done to deserve this?

That was the moment when the first dolphin broke surface near the ship. It swam beside the hull and seemed to be looking right at Ali, who momentarily forgot his sadness. The animal sped away, directing Ali’s eyes to a pod of dolphins a short distance away. There was something in the middle of that pod. A young boy bobbing in the waves, who was waving to Ali.