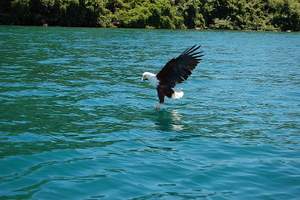 Lake Malawi is as abrupt a contrast to its harsh surroundings as if finding a gem on a faceless desert. Well, maybe not that harsh but I felt it was close. I arrived in Lilongwe to meet my wife who had been working there for a few days on assignment. It had been some time since we had a vacation together and we thought that this was an opportunity to visit the lake which had great reviews from what we could see on the internet.

From Kamuzu International Airport, we were driven to the Norman Carr Lodge on the southern side of the lake. The cool looking waters were inviting after a three hour drive from Lilongwe through the warm, brown landscape occasionally broken by stretches of small trees. Our driver and lodge owner, Taffy, had a wealth of knowledge about the region, having grown up in South Africa and spent many years in Malawi. We touched on various subjects – from politics in South Africa to the history of Malawi, and to its current political situation. His stories and opinions alone were almost worth the long drive to the lake!

The lodge is in the area southeast of Cape Maclear, which is a popular place for tourists and houses many resorts and hotels. The Carr lodge is in a more secluded area of the lake. There is a small village that is right up against the lodge and where many of the staff live. A small mountainous hill lies to the east where a troop of baboons lives. The other distinguishing landscape feature of the area are the many baobab trees. We had never seen them up close before and now I could see why they sometimes have the nickname “upside down trees”, since it looks like they were planted that way, with branches that look like tree roots. My wife said the trees reminded her of “The Little Prince”, by Antoine de Saint-Exupéry. In the story the little prince spends much of his time pulling out these baobab trees to prevent them from overrunning his tiny planet.

Before talking about the lake, I want to say one thing about the village and the people. Before coming to Malawi, other visitors had told me how friendly the people are and that the unofficial motto for the country is the Warm Heart of Africa. I am not sure I can be qualified as an expert in judging this but I have to say that I definitely felt that this was true. Even if the people in the village had very few possessions and seemed to be very poor – even by some African standards, they always were quick to smile and wave. Having foot races with the local children on the beach while they laugh and smile has to brighten the mood of most – except maybe the most cynical.

Now to the lake itself. It is the third largest in Africa and also the second deepest. It borders three countries: Mozambique, Tanzania and of course Malawi. One of the stunning things for me was how clear the water was. I could easily see the lake bottom from the shoreline. It reminded me of the clear waters of the Caribbean but without the coral reefs. The other interesting feature for me was the multitude of colorful fish that reside within the lake. There were bright reds, blues, yellows and orange-colored fish. Breathtaking to see as we snorkeled around in the water. Again, I kept thinking of tropical fish that you might see in the Caribbean or in the Pacific. I also wondered how tasty these fish could be since they usually do not market colorful tropical fish for human consumption in the West. Above the water, flying overhead, was the occasional fish eagle scanning the surface looking for a tasty morsel to snatch with its talons.

The underwater views were so engrossing, I almost failed to realize that my wedding band had slipped from my finger and settled on the lake bottom. The moment of sheer panic quickly passed when I spotted a shiny reflection glinting off of a rock on the bottom. A quick breath, a few kicks and the symbol of our marriage was back where it belonged. It was another reason to praise the clarity of the lake water.

The trip was perfect for my wife and me since we were looking for a way to just have a getaway and find a semi-secluded place to relax. For the first day or so, this is exactly what we wanted and we got that staying at the lodge. However, by the third day, we wanted to see some other parts of the lake. Our gracious host, Taffy, kindly offered one of his cars and some fuel to allow us to drive to a place called Otter Point on Cape Maclear. Before we reached there, we stopped near an old abandoned building on the lake shore. Taffy had pointed out that this used to be a place where flying boats would land, providing transport for visitors up until the 1950s. The building had basically been stripped and the only thing left was the concrete structure that was being swallowed up by weeds and covered by graffiti. We spotted a family of baboons moving around the ruins scavenging for food.

When we reached Otter Point, we found a secluded cove, where the shallow water was like a warm bath heated by the hot sun beating down from above. There were several large, smooth boulders near the shore where one could climb and get a bit of a view of this area of the lake. Shortly after we arrived there a motor boat pulled up and disgorged a family of Western tourists to swim and snorkel in the warm waters as well. I noticed the local boat driver just staring at them and I began to wonder what he thought of these foreigners who came to swim in his lake.

After some time we felt we had seen enough of this part of the lake and decided to return to the Carr Lodge. On the way back, we made a stop at one of the other lodges, well known by expats, for a drink. The bar/dining room was in an open but covered area. It had a view of the beach area where we saw young Westerners sunbathing. Occasionally, a small group of locals would casually stroll by on the beach to stare. I was again struck by the contrast between the two groups of people and the differences between them – probably in some ways as deep as the lake itself. This was our last night at the lodge – one last night to enjoy the beauty of the lake and its surroundings.

We were fortunate that we had the opportunity to come to Malawi and the lake. It is a precious jewel in its own way. But we also know that it is the people who live on and off the things the lake provides who know best how important it is. There are things in life where one looks forward to progress and change. However, I hope that the lake itself can remain as it is for many years to come.