In the Delirium of the Night 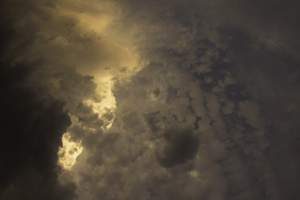 “Dogs barking! Why are the dogs barking? Who is that? Who?

“Tiger stalking behind the curtains is coming for me. Don’t let the tiger in.”

She sits upright in bed. Her heart is pounding a dozen to one. Beads of sweat collect around her forehead and helmet the thinning hair to her scalp. The tropical night is like warm soup making it difficult for her to breathe. The blue spider-veins stand out on her hands as she grips my hand in terror.

She shakes her head. “No, no chest pain,” she says in a calm voice. Then she looks at me as if seeing me for the first time.

“I was asleep,” I reply. “I woke when I heard you crying in your sleep.”

And she is back in her delirious state, the crossed wires in her brain linking past, present and future in the fluid time zone of Alzheimer’s.

“The people in the market they warned everyone to stay at home. There is going to be trouble. Where is your brother? Why is he not here?”

“What are you talking about Amma? You are delirious.” There are no riots. It is 3am.”

I remind her that my brother and his wife have gone to New Zealand for a holiday.

Then she comes back into the present again.

I am lulled into thinking I am having a rational conversation with my mother.

“How terrible,” she says, “how terrible so many innocent people killed because of mistaken identities.”

I wipe her forehead with a wet flannel, give her some warm milk and sit with her whilst she rambles on about that night. Her spider-vein hands grip mine in a vice-like grip. She rails at her impotence.

“What’s wrong with me? Where am I?” She calls out in anguish to her God, “Oh! Murgha. Why am I suffering like this?”

Her forehead feels hot to the touch. Her eyes are staring but not seeing. I check her pulse, which is racing like a greyhound chasing a rabbit.

“Oh dear God, where am I,” she continually asks.

“You’re in your bed, in the house you built,” I say trying to bring her out of her delirious state. I tell her stories that she had herself recounted over the years, about how she had to badger my father to buy the land the government had released in 1971.

“Do you remember, Amma, how you used to boast about how you watched the contractors like a hawk? You claimed you knew every nail that had been hammered into the building of the house.”

My stories open the corridors of her mind. My mother laughs out loud at this gateway into her past.

“Those contractors! Cheating beggars. If you are not there to supervise them, they’ll steal the cement. Foundations are very important. Yes! Yes! I know all their tricks.”

I lie on her queen sized bed and listen to her ramble on. Her face relaxes into a smile.

“Your father. He is such a cautious man. I had to speak to Tun Ismail about the property that was coming on the market. Your father refused because he said he did not want anyone to doubt his integrity. What is wrong with finding out about property if you are not asking any favours?”

I must admit, when I was a teenager I could not understand my mother’s obsession with living in an undeveloped area close to the jungle, miles from the city centre. Her dream was of building a bungalow on a large block of land to keep chickens and geese and goats and to grow her own vegetables. A dream that was not shared by women living comfortable lifestyles in Kuala Lumpur in the 1960s.

It was neither my dream nor my father’s because he enjoyed his walks around the Selangor club and losing himself in his books. Chickens and geese were messy creatures. Like my father I loved the semi-detached government housing, with servants’ quarters and surrounded by casuarina trees in the secluded suburb of embassies and expatriates where we lived.

Just as I’m nodding off, my mother cries out, “The riots. The riots. Where is he?”

Her eyes are agitated. Her hands fumble and twist the sheets.

“I’m in a field, but I can’t see my feet. I’m so dizzy. Why is everything turning and turning so quickly?” she cries. “It’s dangerous. Mobs in the streets. I hope they are alright.”

I realise she is back in the land of delirium.

“Don’t worry Amma. It’s your mind playing tricks on you. It is not May the thirteenth. The year is 2014.”

Her mushroom fear of cloud invades my own senses. I remember vividly the Black Friday race riots in Malaysia in 1969. I was fifteen.

My seventeen year old sister and her best friend, a young Chinese student, had been on Red Cross duty in the city. When the riots broke out they had continued to ferry people injured in the street clashes to the hospital.

The Red Cross van they were in had been stopped by a mob of angry youths looking for anyone of Chinese descent. Fortunately, my sister and her Malay friends had hidden the Chinese student under the blankets of the stretcher. The violent mob, seeing there was only a Malay driver and an Indian student – my sister – had allowed the ambulance to pass. There would assuredly have been a tragic incident if it had not been for the quick thinking of my sister and her friends.

A shudder like an eel slithering through the glittering dark of a cavern runs through me.

That race riot in Malaysia is imprinted in the memory of all Malaysians. For a few days chaos had descended on what had been a peace-loving and harmonious community. All it took was for politicians to incite disgruntled youths to inflame the riots. The mushroom cloud of fear has never left the Malaysian psyche and every peaceful protest creates the fervent prayer, Pray God it does not end in violence.

Dawn is breaking over the kampong, the village where my mother got to build the house of her dreams when my father retired. I had left for London in 1971 and never saw it being built. But my father’s neatly written letters filled me in on its history and on the stories of the family I had left behind.

I remember how much I looked forward to the mail delivered to the pigeonhole at the hospital in the cold of winter. I recall the holidays I spent at my parents’ home in the 1970s. Chickens scratch in the vegetable patch. Pigeons roost in the eaves of the house and my mother nurses strays to health.

I look at the first rays of the sun breaking through the clouds. I hear the cock crowing and the call to prayer through the minarets of the mosque. I am soothed by the kampong sounds.

“Don’t let the tigers get me,” my mother implores me.

I must ring the doctor and change her medication. The medicine prescribed for the pins and needles in her legs has to be stopped. The delirium will have to be controlled with a different drug.

Do we ever forget our nightmares, I wonder, or do they always come back to haunt us in the labyrinths of our memory? 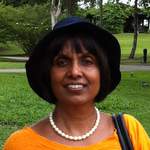 Bhama Daly was born in Kuala Lumpur. New horizons beckoned and, in the 1970s, she pursued a career in nursing in London. She migrated to Cairns with her husband Simon in 1978. They have two sons. Bhama’s career has embraced not only nursing but also academic work at the University of Queensland and the James Cook University, Cairns. Her research and writing are informed by stories, myths and legends and the way in which they provide explanations for being in the world. Bhama’s interests include writing, reading, Yoga, Tai Chi, Zumba and, a topic of endless procrastination, how not to write the best-selling novel. www.tropicalwriters.com.au