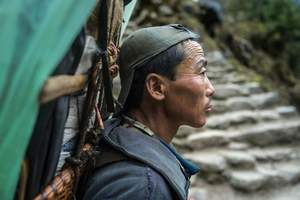 He sat in the dusk trying to read an English book;
I had told him to learn English and he tried to please me.
Introduced as Chhongba only, he never used my first name but held onto the old “Mem-Sahib”.
He was handsome and strong, small as Nepal men are,
without guile and at the end of the trek
he washed his hair and body and I had never
thought about it when we shared the same water flask.
He was the spirit of Nepal and led me to her heart.
The snow was dirty, thirst created hallucinations
but he was there to guide me to the hut.
His stepmother hated him so he came to Kathmandu;
a lonely, frightened child but he was Sherpa.
‘If only I could go to school,’ hearing his words I was glad
I put those folded rupees into a wooden box
standing in the snow near a school along the trek.