Facing Death for a Living 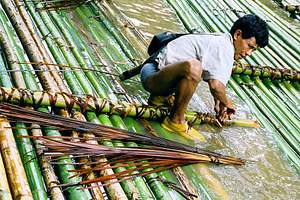 “What on earth are these guys doing on this boulder-strewn, fast river…. surfing?” I asked myself incredulously, as I watched the two figures floating swiftly down the river. As they drew closer, I noticed that they were on some kind of a flimsy raft. Then I froze, as one of the rafters fell overboard into the rapids.

“There he is,” I almost cried out, for I saw him, or rather his upper body, hanging on to one end of the raft as the waters slapped him around. He tried to clamber onto the raft, fell, tried again but slipped and fell again. Then I lost sight of him. Damn! I almost started praying as I kept on clicking away at my camera.

Then, there he was again, half-submerged, still struggling to get back up on the raft.

“Come on. Come on. You can do it!” I mumbled incoherently to myself. And then a miracle. He scrambled aboard! I waved madly at the rafters as the bobbing raft shot past, hardly ten feet from where I stood.

I witnessed this drama during a fishing trip to the Sun Koshi River in Mai Beni, a hamlet in the lower hills of East Nepal. I learned later that the rafters were local villagers ferrying bamboos down the river to sell.

The makeshift rafts are just a bunch of large bamboos lashed together in clusters of 25 to 30 culms, using a jungle vine, locally called birali, and stripped bamboo-skins called choya, and shaped into a triangle – a skill passed down to the rafters by their ancestors. At the final destination, the raft is taken apart and the bamboos are sold.

Nepal’s Sun Koshi, or ‘River of Gold’, is a glacier-fed waterway that rises in the Tibetan Himalayas. It runs steep, fast and rocky, with boulders as large as trucks in some places, and massive rapids, as it crashes through the hills.

Mai Beni is on a sparsely wooded hillside that juts out into the confluence of two rivers, the Arun and the Sun Koshi. With only two small houses and insignificant cultivation, the hamlet and vicinity are far-removed from civilization. Mai Beni is accessible from Baraha Chhetra, the last town reachable by vehicle, by a four-hour foot trail hewn into the steep hillsides.

In Mai Beni we were the guests of Beni Kanchha, whom everyone called Kanchha, meaning ‘Little Brother’. Beni means a confluence in Nepali; so literally, he was Little Brother from a river confluence. His real name was Dan Bahadur Rai and he was a typical ethnic Rai, a native Nepalese hill man, strong and sinewy. Kanchha lived in a thatched stone house that looked out over the Sun Koshi. In his late thirties, a father of two, he farmed a few crops in a tiny patch of land, raised goats and chickens, fished and ferried bamboo down the river to market. His wife, Kanchhi, which means ‘wife’, juggled the household chores, the children and, when time allowed, helped Kanchha.

A great companion and fishing guide, Kanchha surprised us as a gifted story-teller, too. One evening as we rested in his house in the light of an oil lamp, Kanchha sat cross-legged on the floor and told anecdotes from his 23 years on the river. One story in particular made me relive the drama I’d witnessed a few days ago.

“It was a day in October, and it began as any other”, Beni Kanchha began.

Beni Kanchha and his mate Nabin Rai were preparing for a long trip to Terardi Ghat , a riverside bamboo yard, to sell bamboo. They were to transport 225 ghans, or stems, as against the usual 150 to 180 taken at a time by most rafters. Another friend, Man Bahadur Majhi, joined them to offer help. Kanchha made doubly sure that the knots were tied firmly and that all the charis, the 35 foot bamboo poles used to steer the raft, were in good shape.

The sky was a brilliant blue and the sun bright with no noticeable wind. And the post-monsoon water level was high but calm. It was a perfect day, Kanchha thought.

Hardly ten minutes had gone when the first rapids approached. Kanchha gave a cautioning shout and rammed his chari into the churning water. His mates followed suit. Huge sprays slapped the three men as the raft climbed the waves and then dived into the white water but shot out of the turmoil safely.

The trio relaxed as the raft steadied itself on more placid waters and Nabin reached for the tobacco pouch in his pocket and started rubbing tobacco into his palm. Kanchha lit a cigarette instead and regarded the approaching confluence where the powder-blue Arun tumbled into the larger, wilder and darker Sun Koshi.

The Sun Koshi-Arun confluence posed no threat. Kanchha’s main concern was the next confluence, 200 meters down, where the rock-strewn, fast running river Tammar rushed to meet the Sun Koshi. From there on, the enlarged river is called the Sapta Koshi – Seven Rivers – and flows southward over vast plains to India and the sacred Ganges.

The dreaded moment had arrived for the rafters – the Jyanmare Dhunga, the Killer Rock, loomed ahead. Christened as such by the locals, this massive boulder juts almost four feet above the crashing waters.

It also happens to be at one of the most treacherous of rapids, held in awe and fear by the rafters as the site of innumerable accidents, injuries and deaths.

“Here is where a rafter’s sheer grit, experience and prowess are put to the test,” Kanchha told us.

They were ready and, as Kanchha yelled out instructions, the raft rode the waves and then nosedived. It was then that Kanchha realized the current was far too strong for the unwieldy raft. It forced them dangerously close to the killer boulder. Despite all their efforts to push the raft away, it suddenly veered off course.

Fear gripped Kanchha but, before he could shout another warning, the speeding raft dashed full force into the dreaded killer boulder, hovered for a few seconds and then was hurled like a match box towards the waiting rocks to the right.

Despite the deafening roar of the river, Kanchha clearly heard the cracking thud as the raft hit the hidden boulders one after another. At once, the birali tie creepers and choya strips snapped and he watched in horror as the raft split clean in two. Then the waves washed the three men overboard.

“I kicked furiously, and luckily managed to hold on to the broken raft. Fearing for my friends’ safety and mine, I held on,” Kanchha said, “then, suddenly, the raging river tipped the broken raft over, forcing me underneath. Everything went black. A deafening rumble like a hundred strong truck engines filled my ears. And there, trapped under water for what seemed ages, I fought hard, my lungs bursting.”

Kanchha stopped to regain his breath, as if the recollection made it difficult to breathe.

“I panicked,” he continued, “the first face that loomed before my eyes was that of the man to whom I owed money for the bamboos. Then, all in a flash, it was my little son, my daughter and Kanchhi, my wife. This was the end, I thought.”

He caught his breath and went on.

“I don’t know what it was – must have been God’s will – that I suddenly surfaced and somehow clambered aboard the broken raft. Then, to my great relief, I saw my mates drifting on the other half some 150 metres farther downstream”.

Assistance soon came from other rafters who were on the river that day and helped the hapless men to the nearest bank. After a brief rest, the trio fetched some fresh birali vines, tied the broken raft back together and continued down the river.

This is how the bamboo rafters flirt with death on every trip down the Sun Koshi. Bound by tradition and poverty, men from villages in East Nepal will continue to raft bamboo in the Arun and Sun Koshi rivers.

What amazes me to this day was seeing those intrepid rafters tell their stories with what seemed like a natural ability to turn ‘hardship into promise’, and still find ‘humour in deprivation’.