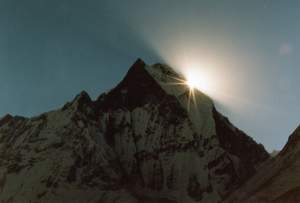 Night lies still heavily in the valley
but Purri brings the morning tea
and way above the sleeping shadows
dawn still hides like a waiting bride.

The cold is part of every morning’s ritual,
hands warm around the steaming cup,
eyes lift up to the unlit skyline
of hidden, waiting, eternal giants.

Night’s curtain rises for a dawn
that wraps the snowcapped peaks
in pink-glazed velvet, rimmed with gold
which glows above the night valley.

Two people, their hands entwined,
sit in a terraced field, still darkness bound,
in worship of an unknown God
as Machapuchare begins to flame.