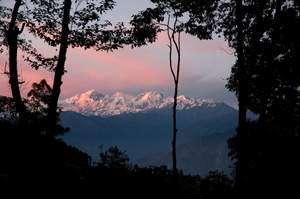 As dusk falls over the Nepali peaks
life’s rhythm stops.
There is no wind,
no clouds that move
to hide the mountain tops.

The smell of fires drifts between the valleys
along the terraced hills
and villages sink into frozen dreams
born out of midnight chills.

Nepali people gather round the fire
and children play.
Candles flicker in their warm dark houses
as night replaces day.