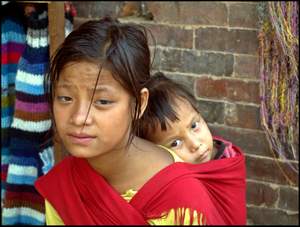 You are dressed in rags,
barefoot and shivering with cold;
a tiny face peeps
out of a shawl that warms
not only you but the latest baby too.

Your eyes are soft black obsidians,
the ready smile hides the hopelessness,
the hunger, the raking cough, the pain.
You ask for sweets and push
your matted hair behind your ears.

Your beauty glows
within the rugged village,
your gentleness condones
our brash intrusion
that seems to fill the valleys.

I want to wash your hair,
wrap you in silken saris
but fear I would destroy
the splendour I see deep in you,
jewel of Nepal.