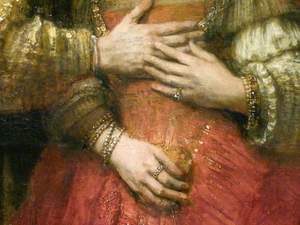 Just one lingering visitor left; at last Tanya could enter her inner sanctuary. Her eyes met with those of the young bride. Tanya longed to feel like her, held so tenderly by her new husband. “To have and to hold,” she had heard when a friend got married after her second child. Yet it was different for this Jewish bride, her wedding unqualified by any prenuptial intimacy. Tanya envied the bride’s sensuality, her voluptuous warmth and how the ornate dress gently draped her feminine frame. The same could not be said of Tanya’s one-size-fits-all uniform.

Secretly though, Tanya was only too glad to wear the museum’s standard kit. From behind her facade she dared to look tourists in the eye, even the dashing young men she shied away from on the odd Friday evening when she went with her colleagues for a drink after work.

Tanya’s gaze fell upon the bride’s luxuriant red dress with its countless sequins painstakingly woven into the fabric. She tried to imagine herself wearing it. Yet somehow she could not capture the image.

“The museum will close in ten minutes. Please make your way to the exit.” Tanya sighed on hearing the announcement: a sigh of relief that a long and monotonous day was winding down to a close but equally a sigh of dismay. In a few minutes she would have to leave her safe haven and re-enter the impertinent rush of the world outside.

Tanya’s eyes once again engaged with those of the Jewish Bride. So peaceful and satisfied – content. If only….

Yet Tanya’s life had taken a different course. The bride’s locks reminded her of her father gently caressing her hair. Those endless childhood summers spent at their dacha. She had loved building huts in the woods nearby and playing hide-and-seek there with her father. At the end of the summer they would both gorge themselves on blueberries and Tanya had always hoped that this ritual would miraculously delay the day of their return.

She could almost feel the blueberry juice dripping from her mouth when suddenly memories of her teenage years insidiously resurfaced. Not a specific event or person but vague feelings, the strongest of which was of never being despised but of not quite belonging.

The Jewish Bride and her husband had each other but what of the world around them, the picture beyond the painting? How had they met? Who were their families? What future awaited them?

Via here, via there, Tanya had landed up in Amsterdam. Yet her past was not important now. What mattered was where she was heading. There was no lack of opportunities but she hesitated with each potential step irrespective of which direction she took it in. Deep down she acknowledged her potential and charm. Moreover her orthodox upbringing had taught her to use her talents and to be grateful for the gifts that God had bestowed upon her. Yet so far she had failed to break though the cords of her own indecisiveness.

“The museum will close in five minutes Please make your way to the exit.” Did he really love her? Tanya could not help wondering each time she allowed her eyes to penetrate his face. Was it really “until death us do part” or did she detect a certain forlorness in his gaze? Could an apparently sublime moment really become a lifetime of bliss?

Inwardly, Tanya yearned for such an intimate relationship but invariably her body recoiled from the prospect. Would marriage bring her any respite from the prying eyes and all too predictable comments that her Athenian beauty elicited? Her hapless efforts to simply allow these drops of derision to run off her body had so far only served to enhance her predicament.

Time to go. Tanya freed her hair and let it fall over her shoulders. Dutifully she performed the last few security checks before briskly walking down to the entrance.

Dave Thomas writes art reviews, popular science articles and poetry. He also enjoys interviewing people. This is his first short story. Dave was born and raised in the United Kingdom and moved to the Netherlands in 1989 to do a PhD in Agricultural Entomology at Wageningen University. After a brief spell as a high school teacher he has worked in the field of science communication since 1999.