Penny for the Guys 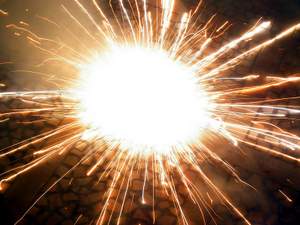 We remember with pleasure past guy Fawkes’ Nights in this country, where this was an outdoor get-together for lots of fireworks and excitement. Bonfire night was like being on another planet, the fiery sparks and dark having their own conspiracy. Night has that special secrecy of whispers and things going on that you can’t quite see.

And the celebration lent a warmth that held people together. A fuse, so to speak. About a month before, a man would be sent into the bush to find just the right tree with a Y fork to stack the other branches into, tepee style. Paper and cardboard were saved to help get the bonfire going.
And our guy would be a sack, stuffed full, with a garish face painted on it. He’d be put pride of place on the stack. And it would be great fun with kids all over the place. That was years ago in my memory and fire and safety regulations have put an end to all that.

So we were feeling a little bit fed up. The only big firework display we were likely to see this night would be a fiery eruption from one of the thirty five extinct volcanoes Auckland is built on. This island, volcanic to its molten core, might rise up just for us in a fiery fury. Byron was getting a little fed up.

“And you’d better watch it!” he shouts at Rangitoto sitting quietly in the distance, “they’ll be after you too.” The volcano does not reply.

The empty loo rolls round his neck rattled in sympathy. Byron knew he had the wrong period in history, Stuart, not Elizabethan, but he went with his idea anyway.

But we should have bought our fireworks earlier because all the shop had left was girlie sparklers. We couldn’t turn our noses up at them because then we’d have had nothing to set off some sparks. Unfortunately Guy Fawkes had been born four hundred or so years too early to help us out. We needed his expert advice.

This was the question we asked ourselves. What would Guy Fawkes have done in the blow-up scenario with only 432 sparkers? A mini-rebellion but worth pursuing. After some thought we put the sparklers into small bundles and then bigger bundles until we had a sheaf. Sparklers not wheat. We wanted the best max flash.

I pulled the centre sparkler up to act as a fuse that would set the others off. We lit this fuse and suddenly there was a fountain of sharp hot sparks. Who would have thought little girl stuff could get so dangerous and out of control. And still the devilish device hissed and spat in a whirling-dervish mad dance.

The hot, hot sparks burnt through our clothes and onto our skin. The mercury was coming through our boots as we frantically tried to stamp out the running sparks. Our backyard was electric. The air was white with fury. The tips of the grass alight and the strong clothes line and pegs blazing merrily. Byron’s jacket was alight and the window in the garden shed gave an ominous creak. I grabbed the hose.

We could hear the siren of a fire engine nearby as we realised how far our joke had got out of hand. We had a lot of clearing up to do before the landlord called again. Relieved, I reached for a beer.

We were absolutely filthy but the discarded sparkler stems mirrored delicately the pinks and greens of the thistledown skyrockets just above us. But of course we still thought we’d had the best display and shown a bloke’s inventiveness with very limited resources. And in the process upset the dog next door who was whining and scratching at our fence to be let in.

All in all it had been a very good blokes’ night in.