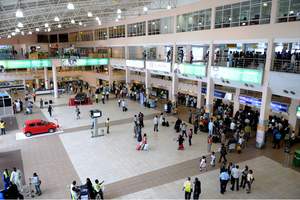 “Everyone who goes to that place hates it!”

“They are all thieves!”

“They are fast-o, and so smart you have to be very, very careful!”

“They are too aggressive!”

“Don’t leave the centre, someone can catch you and sell you for juju!”

“Those people! I hear in the markets you can buy everything you want, even human head! I swear.”

“You, you are slim, so they won’t boil you. They like human fat, the oil. They’ll roast you, they like eating crispy human flesh!”

“You could be in the streets and someone would rob you in full view of everyone, and nobody will do anything to help!”

“Whatever you do, don’t arrive at night!”

My God, this place sounded like the true depiction of hell. Obviously, I was scared, who wouldn’t be? However, being the adventurer I am, I was also very intrigued and subconsciously prayed for the opportunity to find myself there; after all, what was the worst that could happen to me? Oh yes, I could end up as someone’s finger-licking roasted dinner.

My father told me a joke from his dinner party repertoire. Apparently, God had assigned most of the African continent to various groups of people, but, there was a large piece of land that was endowed with many good things, lying empty. The rest of the Africans looked on in wonder and muttered amongst themselves as this blessed empty piece of land remained untenanted. Why was God being so unfair? A meeting was called and a delegation, led by a Ghanaian spokesperson, went to query God about His actions.

Spokesperson: God, it’s not fair! How come we have all these problems with our places and yet this huge piece of land is being given the best of everything, with no one on it. Why?

God looked at him with an indulgent fatherly smile.

God: Aah, but you don’t know the kind of people I’m going to put on that land.

This joke always raised huge guffaws of laughter and sparked strong reactions and terror stories from other dinners, each trying to outdo the other in the telling of frightening and bizarre experiences. Tales of corruption, juju and pure chaos. Interestingly, most of the stories I heard came from people who’d never been to the country but they told the stories as vivid firsthand experiences.

I believe, if you wish hard enough for something, it will eventually find you. So, it came to pass that I was invited to participate in a writer’s workshop. Where was the location? Yes, Hades itself!

As the time for my trip drew closer, I wanted to find some good news about the place, just to balance the stories I’d heard. The only positive thing I heard was that the markets were amazing and that the things were cheap, but the people – forget it.

The Internet wasn’t much help either, and in many ways reinforced what many people were telling me – ‘bribery is a natural part of the culture, so don’t even think of avoiding it.’

I was fascinated and scared at the same time. One minute, I wanted to cancel my trip and the next moment I was excited about the prospects of an adventure. My neurons, fed up with the to-ing and fro-ing, shrieked at me like a demented Greek chorus, “What is your problem? What happened to the Alba we know, the ‘I’ll give anything a try’ adventurer?” They were right!

I reminisced surviving the rough townships of Cape Town and Jo’ burg; a slow smile spread across my face as I relived the sounds of weeks spent in the Hood, Bed Stuy, New York, where along with hundreds of other revellers, I had to hit the deck at a block party, when gunfire started. That was exciting! How could I forget Sunsplash and dancehall in Kingston, the music throbbing through my body while breathing in the heady, irie inducing, fumes of marijuana? Churascos, accompanied with pagode and samba music in Rio de Janeiro; for goodness sakes, my plans for getting into the ‘Vai Vai’ samba rehearsal at the Moro favela was scuppered by three gun toting youths who scared me sh**less, but …. I looked forward to trying something new and daring. Not only passing through a country, but letting it pass through me and be a part of shaping who I continue to be. ‘Reality check’ evicted my scaredy-cat genes and my fighter genes moved in. My neurons were suddenly at rest.

I landed at ‘whatever you do, don’t arrive at night!’ 8:00pm and made my way towards immigration. The gun toting soldiers hanging around didn’t ease my thoughts, but there was only one way left to go. Forward.

The immigration officer casually asked me how long I intended to stay.

“Two weeks?” I whispered, as a question.

“No,” he bellowed. It sounded like a bellow and his slamming his fist against his desk didn’t help matters.

“You have to stay for at least a month so that our young men will have a better chance.”

The huge friendly grin across his face contradicted what I was imagining.

He stamped my passport and his final words, “You’ll stay one month, your sun has to set here! Have a wonderful stay.”

My God, was I going to be kidnapped and roasted? Did his last comment mean that I would never leave this place alive? Was there someone already eyeballing me for juju? Looking around the bustling crowd, I couldn’t see who would possibly think of roasting me.

So, gripping my suitcase tightly, bravado fighting for the upper hand, I held my head high with a confident smile plastered on my face and walked out into the welcoming warm balmy night of Lagos, Nigeria.

Alba Kunadu Sumprim grew up on three continents, Europe, Africa and Latin America, and has been writing for as long as she can remember. She still has a stack of notebooks containing the melodrama of her teenage years. Alba graduated as an editor from Cuba’s film school, the Escuela Internacional de Cine y Televisión, then worked on independent film projects in Cuba and London before moving back to Ghana. There, her work as a writer included seven years with the BBC. She now spends her time writing screenplays, teaching, editing manuscripts, producing and directing documentaries and….writing books. These include two spin-offs from “The Imported Ghanian”, her long-running weekly column in the Accra Daily Dispatch. Alba lives in Accra, where her cosmopolitan background intrigues and confuses her compatriots in equal measure.
http://theimportedghanaian.com