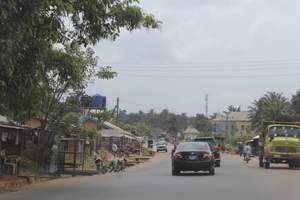 Ifeanyi prayed silently for the professor to end his lecture as he had been teaching for over two hours. He muttered under his breath: Doesn’t he ever get tired? He shook his head to loosen a crick in his neck, slowly absorbing every word the grey-haired man uttered. Finally, the three-hour lecture terminated abruptly after the Prof, as he was fondly called, received an alarming text message that his wife had been admitted to the University of Benin Teaching Hospital. Ifeanyi felt pity for him and even for the wife he had never met.

Dashing out of the lecture theatre, he headed for the main gate and boarded a campus shuttle bus leaving for town. Seconds grew into minutes, minutes into hours, and Ifeanyi was finally seated in a thirteen-sitter passenger bus. He was on his way home. He watched as the busy Osayamen market, petrol stations, residential buildings and trees along the New-Benin road disappeared in a slow dance of dissolution. With his ears plugged, soft classical music wafted in from both sides, soothing his numbed nerves. The cool breeze caressed his face, gently dragging him into another world of solitude and day-dreams.

Ifeanyi woke to the sudden lurch of the bus: it had been a smooth journey and he had slept all through. He alighted hurriedly and took another bus leaving for Nnewi. His heart jumped with the joy of being in the city he called home, a city he had left two months ago for school with waves of sadness washing over him, a city he always longed for. He called out to the driver from the back seat:

The sun gleamed with an unusual radiance that afternoon as he stepped down from the bus, waving his right hand to the other passengers on board who still had longer distances to travel. He beamed with smiles from cheek to cheek, watching his ageing parents across the other side of the street laugh over something that seemed to amuse them greatly. They sat under an aluminum shade, selling their wares. Cars and bikes blared down the tarred road, Ifeanyi waited impatiently before crossing. His father was the first to look up.

His mother was busy with a customer. Ifeanyi hugged his mother, inhaling the acridity of the sour ogiri she sold, her body still plump and her skin soft as he remembered it. His mother grinned at the warm embrace. Despite their wrinkled faces, Ifeanyi forced himself to believe they were as young and energetic as he was.

“Your sister is around,” his father said.

He hadn’t noticed his father’s face crease into gloom. He left them, walked through the rusted front gate and met his sister in the yard, which was lifeless but for her, sitting on a low wooden stool, her baby on her lap with a plastic toy.

“Good afternoon,” he greeted her.

He lifted Ugo, his two-year old nephew, from his sister, brushing his face against the child’s. The innocent features of the half-naked child brought smiles to Ifeanyi’s face. He laughed loudly watching the boy, whom he held firmly held in his arms, struggle to say something but his words were muffled.

“Maybe when you turn four, I will hear what you have to say.”

Ifeanyi looked up and was greeted by the forlorn expression on his sister’s face. Her mind was as if a million light years away.

“My sister, what is the problem?”

No reply. Her eyes were sunk deep in their sockets, her face ashen and haggard, looking bereft of the smiles it was once used to. With playful Ugo on his arms, he ran out to ask his parents what had gone amiss with his sister.

“She has just lost her husband to an illness,” his father said bitterly.

“And her husband’s people kicked her out, blaming her for his death,” his mother added.

Ifeanyi stared into space, trying to come to terms with what he had heard. He was not interested in the cruelty his in-laws had meted out to his sister; he was more concerned with how his sister felt after she had lost a man she fondly called Obim, a man she had exchanged marital vows with at the altar three years ago, a man she had truly loved. He returned to console his sister but was gripped with grief on seeing her shed uncontrollable tears. Words of consolation seemed like distant friends, Ifeanyi craved to find them. Kneeling beside her, he locked his left hand in hers, holding Ugo with other. She shivered as more tears escaped her swollen eyes, wetting her face. Ifeanyi tried to stifle the tears that welled up in his eyes but couldn’t. His little nephew finally said something, something that stirred the strangest feelings within Ifeanyi, something that had a deeper meaning for him and his coming home. Ugo said, “Un-cle.” 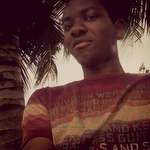 Okafor Emmanuel Tochukwu is a Nigerian writer and was born in Lagos in 1993. He is currently studying electrical and electronic engineering at the University of Benin. His creative writing has appeared in Naija Stories and Uniben Talking Drum, as well as on StoryMondo, and is forthcoming in Aerodrome and the first ArtBeat Afrika short story anthology. He recently concluded an online writing course with the University of Iowa. An active member of the University of Benin Creative Writers’ workshop, Tochukwu is currently working on a full-length debut novel.