Nyama: Chronicles of a Lost Mind 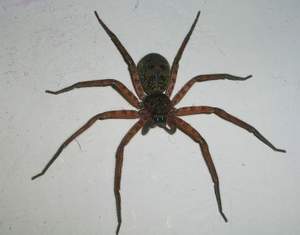 They came to me again tonight in my sleep,

Crawling all over my body, spindly legs and skeletal frames, determined to burrow into every crevice, to devour me from within.

Every night they come like this, every night I wake up screaming, covered in sweat. It doesn’t help that I share a room with my mother and two sisters. The first time it happened, Mama swiftly stopped the screaming with two stinging slaps to my cheek but it happened again the next night, and the next. By this time Mama had concluded that it was evil spirits. The same ones that afflicted Nonye last year, causing her to spin around in convulsive circles and bite her tongue. The doctors at the general hospital in Lagos, where Mama works as a cleaner, said it was meningitis. They kept Nonye in the hospital for three weeks but Mama took Pastor Ifeanyi to the hospital to cast the demons away. She was convinced that it was Pastor Ifeanyi’s prayers that healed Nonye, not the doctor’s medicines.

Mama said Pastor Ifeanyi would take care of my demons too. So off to Pastor Ifeanyi we went. I knelt down while he prayed and casted, all the while spraying me with saliva and holy water. I even drank the holy water and rubbed the anointing oil he gave me into my scalp. I did all these things under Mama’s watchful eye.

Even though I knew what was really wrong.

You see, it all began the day I killed Nyama. I don’t know why I decided to call him that; Nyama was the word my siblings and I used when we encountered something disgusting or repulsive to us. We would shout “Nyama!” and run away screaming. I don’t even know why I concluded Nyama was a ‘he’, I just did.

I had been squatting above the communal toilet, the one we share with eight other families in the ‘face me I face you’ block we reside in. I was concentrating intently when I saw it crawling along the wall. Feeling mildly irritated at this spindly intruder strolling by while I was attending to my private business, I took a swipe at it. However, to my utmost surprise and annoyance, instead of scuttling away it swung at my hand, aggressively. Obviously wishing to do me some harm. I laughed out loud. What was this tiny insignificant creature thinking? Perhaps it just wanted to make me regret disturbing its leisurely stroll down the toilet wall. Amused, I took another swipe at it and it came at my hand again. I ignored it for a minute while I finished and then I casually reached out with my right foot and killed it. I snuffed out its life, smiling as I did so. I felt powerful. That would teach the little monster to mess with me, I thought, stepping out of the toilet with a smile on my face. An hour later I had forgotten about Nyama and I went to bed. That was the night they first came for me.

But that was four weeks ago. Since that time I have consumed countless litres of holy water and shined my scalp with ‘anointing oil’ again and again, my knees are starting to feel the pain of constantly kneeling down for Pastor Ifeanyi’s ministrations, but still they come; Nyama’s clan, invading my body, night after night,. It has gotten to the point where I dissolve into a terrified wreck whenever I spot any one of them, even in the daytime. But they will not dare attack while I am awake, and so I will not sleep. I will remain awake, where they cannot reach me.

Tonight, as I sit in the corner of the room I share with the rest of my family, listening to the sounds of their sleep, the soft but audible breathing of my sisters and the occasional snore farts from my mother, I am determined not to nod off to sleep.
I begin to recall the day gone past, hour by hour, hoping the mental activity will keep me awake. I start from when I woke up this morning to hear Mama quarrelling with one of the neighbors over a bucket that she claimed to be ours. People on our block are forever fighting over who owns what – buckets, brooms, even husbands occasionally. My mind skips the quarrel, continues past my morning bath and the breakfast of akara and custard which I shared with my sisters, Nonye and Chibuzor, to my walk to school with Mary, my best friend. Just as I get to the part where Mary and I stopped to buy chin-chin, I feel a crawling sensation go down my back.

I jump up with a start. Could this be them? Could they have followed me here? Looking at the wall behind me I can see nothing but the edge of Nonye’s wrapper touching my back and, with a sigh of relief, I relax again. I try to go back to buying chin-chin with Mary but I can’t, so I start singing to myself in my head. I dare not sing out loud for fear of waking Mama up and receiving some of those slaps she loves to dish out. I choose a hymn which Pastor Ifeanyi taught us last month, “All things bright and beautiful”. I smile as I sing it in my head, “He made their glowing colours, He made their tiny wings”, I start to sway along to the song in my head, somehow convinced that the bright and colourful images the song is evoking will scare the evil creatures away.
“But they are not evil creatures are they?” a voice whispers in my head. After all, “the Lord God made them all”.

“You are the evil one”, the voice continues, “you killed one of God’s creatures”.

I try to brush the voice away, try to stop the song in my head, but I cannot, the song gets louder.

“Each little flower that opens, each little bird that sings.

I look down to see that I am covered with them. Nyama’s clan have finally come to finish me off. As I start to scream, I vaguely realize that I must have succumbed to sleep at some point during the night, I can feel the bites now, the sharp, agonizing pain. Through the haze of pain, I can hear Mama and my sisters calling my name, some neighbors are in our room, they are trying to hold me but I am screaming and dancing around in a painful frenzy. Or am I? No, I am singing, and dancing beautifully, “All things wise and wonderful, the lord God made them all”.