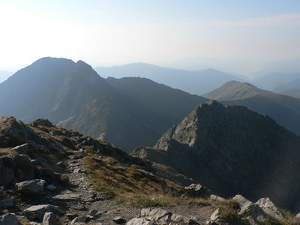 I was limping and running in a swiftly moving cloud towards the highest peak of the Transylvanian Carpathians, visibility: two meters. The wind had been blowing at 120 km/h since Brent and I stepped onto the backbone of the most rugged of mountain ridges, the Fagaras Mountains, in the Southern Carpathians three days earlier. I had to run because the sleet had drenched me completely and the extreme wind turned my clothes into freezing bandages. Suddenly I heard a strange sound in the airy milk and howling wind around me. It sounded like either the echo of an explosion in a mine somewhere in the valley or the sound of my rolling backpack I had left in the lee of a big rock a minute earlier. Since the trail continued this way, I didn’t want to carry it up to the top and then back down.

I could not really believe that the wind, no matter how strong, would be able to push my 20 kg backpack off the ridge, so I opted for the detonation. An old Achilles injury had got renewed during the extreme exertion in the past couple of days, so I was basically unable to push with my left foot, but I had to rush on because I was freezing every moment I stopped. In the next second the inner man in my head stopped me and said “you’d better go check on that backpack first! The peak will be there later, too, and you won’t be able to see anything anyway, just like you haven’t seen anything but racing fog ever since this trip started.”

So I turned around and started hopping down the rocks I had lamely run up on. When I reached the place where I had left my pack, I almost fainted. It had literally vanished into thin air. I was standing below the highest peak of the Carpathians at 2,500 m in snowy rain that was cutting to my bones, wearing running shorts and a thin long-sleeved shirt, looking into the rushing whiteness before me. The video clips of the past three crazy days were flashing on my mind’s screen: Brent, the naive American, who wanted to tag along on the hike bringing a loaf of bread and a zucchini for the six-day-trekking, getting into the storm even before we could reach the main ridge, sleeping under rocks because the wind blew the tent to pieces, understanding why there are so many crosses in the memory of those who had died in similar circumstances before me, dwelling too long on death thoughts, stumbling down exhausted to the refuge after feeling the advanced signs of hypothermia, saying good-by to my companion who, after almost losing our lives, decided to end his initiation there and hiked out and went home, hiking back up to the craggy ridge alone, away from the safety and nice weather of the refuge in the pine forest.

“Why did I have to come back here? Why? Only to finish the whole ridge? So that I can say that I did it, and I didn’t quit regardless of the circumstances? So what? What do I do now? Why didn’t I listen to all these bad omens?”

“The mountain does not take visitors now, can’t you understand?”

No clothes, no backpack, no food, no passport to go back home to Hungary with, no money, and no clue about what direction my backpack might have rolled to. Shall I go back to the refuge, down to the police in the next village, tell them what happened and start a bureaucratic hassle that will last for some weeks, or shall I go down in front of me, into the thick fog, unseen cliffs, slippery grass, in the hope that I shall not fatally injure myself, and try to find my backpack?

I thought I would at least give it a try and, if it seemed too dangerous, I could still hopefully climb back to the barely visible ridge trail and hike down. I started sliding down the water pearls hanging onto the tall alpine grass. I grabbed onto tufts of grass and I slowly descended on cliffs and small clearings. The wind and icy precipitation were mercilessly whipping my body. After about five minutes I stumbled upon my thermal mattress coiled around a rock, fluttering like a black flag in the white fog. I was happy because at least I finally got a sign that my backpack had sometime visited these parts. But now I could use only one of my hands, which at times was really dangerous. My mattress was rolled under my left arm, I was hanging from a cliff with my right fingers when out of the blue a huge horned beast flew across my face and landed on a cliff not larger than my palm. Like I didn’t have enough excitement in my life at the moment! I got an automatic adrenaline shot and I watched my heart rate speed up to max and back. A Zen faced mountain goat looked me in the eye for a couple of seconds from inside the visibility boundary. It was like Pan wanted to check in with the intruder of his hellish heavens. After a brief eye contact he hopped out of the picture, into the great howling white he had appeared from.

I slowly arrived under the blanket of clouds and could actually see as far down as my eyes permitted me. At the bottom of the gigantic valley, where only huge black glacial rocks congregate, I seemed to have spotted a greenish something that looked more like the color of my backpack than the grass. My heart jumped but it was still way too far to be sure. I had been descending for more than an hour by then, leaving behind cliffs several hundred meters tall, smaller valleys and deep ravines. “Even if that is my pack, it will be in pieces from all the rolling on these rugged rocks and falling huge distances in the air,” I thought to myself. As I got closer to the bottom I started to make out the purple straps of my backpack. A huge cliff fell off my heart as it became obvious that the alien object in the distance belonged to me and it awaited me to save me. A true savior indeed!

I ran the last couple of hundreds of meters and I couldn’t believe my eyes when I saw that the had bag survived the fall without a scratch. I gave it a long hug.