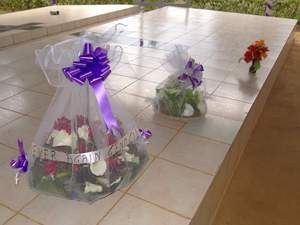 In April 1994, he was 24. He had been married a month to a woman he called “My Jasmine”. Like the flower. That was her name: Jasmine Wabuyo. Correction, she was now Jasmine Kintu. He had not dared hope for it. But she had chosen to drop her maiden name for his.

She had told him days to their wedding when their budget was just not coming together and he was wearing his shoe soles thin, sweating through the Kampala streets, mumbling to himself. That had made him stop, drop the abacus calculations in his mind, look at her again.

When the cyclist in his mind started peddling again, he knew he would never forget he had a passenger on his carrier. He could not careen like he had before, taking corners with only the skins of his knees to worry about if he tumbled and fell.

In 1994, he had been a year at The Eagle. After everyone at The People’s Voice thought he was mad to leave. Even the freelancer who was to inherit his seat and desk had urged him to reconsider, “The People’s Voice is a government paper. It is here for a long time. Those independents can be shut down anytime. Then what will your family eat?”

But he was determined. An editor who had never liked him had stood over him as he collected all his scraps of paper from his desk drawer, four years’ accumulation of press releases, conference invitations and discarded government project papers. The editor would not let him take two of his notebooks bearing the The People’s Voice red and yellow letterhead: “Those are ours.” The editor would not let him drop what he no longer needed in the newsroom dustbin: “Take your rubbish with you.”

He had wanted to say his goodbyes before he left the newsroom but decided not to. He was walking by the roadside in the sun into town when a blue police patrol pick-up parked in front of him and he saw he had friends in it. They asked, “Where can we drop you?”

He was going to scramble into the driver’s cabin with their commanding officer when one of the sergeants in the back on the kabangali challenged, “Afande, why don’t you sit here with us?” He did. He had never seen Kampala like this.

His first story for The Eagle would be “On the Back of a Uganda Police Pickup”. Years later, after The People’s Voice, The Eagle and many other publications he had worked for and when he was thinking of retiring; he would learn from one of his editors, a decade younger than himself, that his story was taught in journalism classes in university. But that was years later.

In April 1994, he was looking forward to June 1994 and to the World Cup, Nigeria representing “the real Africa.” He had hopes that Nigeria would surprise even more than Cameroon had done so in the 1990 tournament with their Roger Milla flourish. Nigeria might be in the group of death with Argentina and Bulgaria but Nigeria had Jay-Jay Okocha, who was much younger than Milla, danced with the ball like a Brazilian and could shoot to burst any net. The Nigerians were also a much younger team and physically bigger, fast runners. This could be Africa’s World Cup. He was looking forward to it.

Before April 1994, he would not have stopped by the road and shaken his fist, speaking up when a speeding taxi, nearly running over Buganda Road Primary School pupils, jerked to a stop, the conductor leaning out of his window to upbraid the terrified pupils with a sneer. “If you want to die, go back to your Rwanda. We are not like that here.” The two brothers holding hands, looking down at their black Bata shoes in fear until the taxi sped off, past Hotel Equatorial, towards Bombo road.
Before April 1994, he knew Kigali, maybe Gisenyi, but he had never heard of Ruhengeri, Kibuye, Kibungo, Gikongoro, Cyangugu, Gitarama, Butare and the terrible things that happened there in 100 days.

Before April 1994, he thought he would be a journalist for maybe ten years, then join his father in the ministry he was building with the church he had started, bring his skills to grow their congregation. April 1994 changed all that.

He could not forget those kids. They were who he had been on April 11th 1979. Son of a Muganda father and an Acholi mother, “Tall and strong like your mother’s people,” his father used to say proudly, patting his matted hair before he overshot him.

Until April 11th 1979, the fall of Idi Amin, when to be tall, black and strong south of the Karuma Bridge became a crime. And they were hunted.

He was nine years old but he never forgot the day they came for his mother, his two sisters, his baby brother and for him. He never forgot how his father had to denounce them to save him. As the men with hoes and butchers’ knives jostled him, demanding, “Where is that proud Acholi woman of yours who has no manners? Bring her out and we’ll teach her how to behave!”

His father pleading, “Why are you tormenting me? That woman was a witch. She has already taken everything of value including her bastards. Check my house if you want.”

But the men took everything in their house and left his father on his knees in front of his door, head bowed.

He saw it all, through the ventilators of Kipapali’s ceiling where he had been told to “Lie quiet like you are sleeping. Don’t make any noise.”

He never forgot but he tried to follow what his father had told him, “Don’t think about.” Until April 1994, when The Eagle founder rose up from behind his desk, pipe in his left hand and an invitation in his right, and roared, “Who wants to go to Kigali with Kagame? RPF is taking journalists.”

He had replied before he even thought about it, “I will go. I want to see.”

Today he spends his days in a café in Paris, hoping that he will live another day, that the mysterious assassins who are seeking him have been thwarted yet again by his reluctant hosts, that the unwelcome honesty of his journalism will remain unavenged, at least for a while longer. He watches for the lights on the Eiffel Tower every day and remembers all the people he was with that 4th July 1994 in Kigali, the day they entered the city singing, “Freedom from fear for all Rwandans and peace loving people. Freedom is here. We are free!”

He remembers those who no longer are.

David Tumusiime is a Ugandan writer and journalist who lives and works in Kampala, where he is the website editor for Uganda Radio Network. He has been published by Kwani?, The East African, Readers’ Café and somanystories. The story published here is one of David’s favourites.