The Shade of the Apple Tree 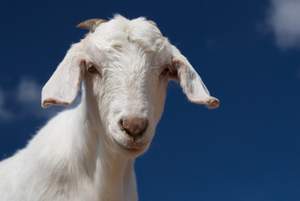 Samuel was eating an apple. He had picked it himself with his old gnarled hands, stretching as high as he could for the last apples on the tree. He sat down to enjoy briefly the juicy bits of apple as the sun slowly appeared on the eastern horizon. At this refreshing time of the day he somehow was able to fill his belly with a little bit of hope. However as the heat of the day set in and time dragged on with increasing hopelessness, he fell into a weak daze and forgot his hunger. He had no choice but to detach himself from the gnawing emptiness in his stomach.

This was the main road into the largest town in this part of the Free State. Surely some gentle light would shine on him today. This emptiness could not go on forever. His row of wooden cows were neatly arranged in front of him on a bright orange blanket to attract attention. They were the beloved cows that he had herded in the past, some with the mottled coats of Friesland cattle, others with the high-pointed hips typical of the Jersey. There also lay displayed the carved majestic humps and horns of some reddish Afrikander cattle. He had tried to be as realistic as possible. He had to be true to these animals that he had herded for at least twenty five years of his peaceful life.

The previous night he had fallen asleep in a state of despair, a familiar anguish ever since he had lost his job seven months and ten days ago. He had worked for Baas Stoffel, a farmer down in the luzern-covered camps along the murky Modder river. His loss had been very sudden. It was something totally unforeseen that hit him like a bolt from the thunderous sky. This had not been a rain storm he could be thankful for, as he had usually welcomed rain all his life. No, his fault had been to try and help Mies Sarah, the wife of Baas Stoffel whom he had served willingly for all those years. A loyalty such as his did not however agree to watching any woman, black or white, being beaten viciously by her husband or anyone else.

Samuel had lost his own wife in childbirth many years ago. He cherished her memory more deeply than that of any of his beloved cattle. Never would he have beaten his beloved Rebecca. He had ached for her every day since her death, an ache that never seemed to fade in spite of the relentless passage of time.

Samuel had intervened; yes, he had broken the strict convention that servants and labourers were to turn blind eyes as far as bad behavior on their white master’s part was concerned. Those in the employ of the white man were often regarded as dumb cattle just staring at the antics of their masters. He had answered the call of his true and invisible Master. He had crossed the line of silence and fear and had condemned his employer with an icy dignity which would have done his ancestors proud.

He had even called out to Mies Sarah to follow him to the safety of the neighbouring farm, three kilometers away. It was growing dark and she would not have found her way through the bush and the veldt on her own. But the poor wretch was unable to separate foe from friend. Following the instincts of her prejudice, she declined Samuel’s help in harsh contempt, not willing to share her shame with either black or white man, yet willing to cower once more under the pitiless sham of power she called her husband. Baas Stoffel, at the height of his brutality had sacked Samuel in a hail of insults and blows that still continued to tear at his soul, even now that a safe distance of time and space had elapsed.

Samuel sighed deeply under the apple tree. There was no point going over these sad events. Now he had to wearily wait and wait. Soon the milk of a little white goat grazing under the trees would dry up completely. This little animal had kept him company in her quaint, comforting way. Her plucking at the short grass reminded him of the cows he had tended for so long. As the sun moved across the sky he watched the little goat moving from patch to puddle and from tuft to rock. Sometimes she would lift her finely profiled head and gaze directly into Samuel’s eyes. He had given her an apple core from time to time. Maybe there was always hope of another one? But there was also the need for reassurance in those intent eyes that seemed to understand his plight.

The day grew cooler and dusk gradually settled over the man under the tree and the figurines on the orange blanket. The many folk passing by had ignored the man and his carvings another day with hardly a glance in his direction. Maybe they were scared of him in a superstitious way? The story of how he had wanted to take Mies Sarah away might easily have become distorted in the retelling.

The goat was lying close to old Samuel, who had now dragged himself painfully behind the tree, pulled his figurines closer and packed them under a small prickly bush. The orange, crumpled blanket covered the skeletal figure of Samuel whose shaking hands, pressed against his stomach, were trying to keep the hollow ache from engulfing his mind. He lay there on the sparse grass resting his bare head on the bumpy roots of the tree. He talked softly to dear white goat, telling her name for name of the many cows he had milked and the long-legged calves he had helped bring into this harsh world. He spoke soothingly to the dim shape in the dark, sure that the little animal understood him and was comforted in some way by his soft words. The darkness thickened and Samuel’s voice gradually became a whisper, then fell silent. No white furry shape or orange blanket could break the darkness.

As dawn gradually lit up the glistening green patches under the apple tree and the birds began to sing their morning song, nothing stirred there in the dappled rays except for the little white goat, muzzling the orange, motionless shape whose loving voice was gone forever.