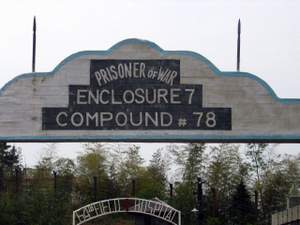 It was January 2012, and I was on my way to South Korea to keep a promise – a promise to my uncle that I would visit him no more than five years after my last trip there in 2006. I just missed my deadline but I was glad that I was able to at least see him and my other family members once again. It was also a time to try to connect with a country of my heritage but not of my birth. My parents emigrated to the United States before I was born. Now I was here to see my family and friends but also to see some of the sites that meant something to my family. One place was an island off the southeast coast of Korea called Koje. An island that my father was forced to spend some time on when he was just a boy.

We started by visiting family and friends in Seoul and also included some sightseeing around this great metropolis. The weather was very cold – the Arctic winds swept down from Siberia bringing the hard chill of winter to northern China and the Korean peninsula. Even the low temperatures didn’t stop us from enjoying the sights, sounds and exotic smells of this “Land of the Morning Calm” as it is known. However, Korea’s past has been far from calm. Sixty years before, this small country was the location of one of the great battlefields of the Cold War. A war which cost the lives of a million Koreans and displaced millions more to other parts of Korea and abroad. My father and mother were among those so displaced.

My father once told me about his time as a refugee, traveling from the north to the south during the Chinese intervention into the war. By foot, boat and bus, my father’s family traveled down the coast, staying ahead of the Chinese advance. They finally arrived on the island of Koje which is just off the coast near the port town of Busan. This was the island that I visited with my then girlfriend, who is now my wife.

Koje Island, or Koje-do in Korean, has a long history. Centuries ago, one of the great heroes of Korea, Admiral Yi-Sun Shin, defeated a larger Japanese invasion fleet at the Battle of Okpo just off the coast of the island. During the Korean War, the island became a home to refugees trying to escape the advance of communist forces in the early part of the war. Later still, it became home to prisoners of war captured by UN forces.

The island lies just a few miles from Busan and originally it was connected by ferry to the mainland. Now there is a multi-lane bridge and tunnel that take you rapidly to the island. We had time to visit for only a few hours, so we focused on the island’s main attractions. The biggest attraction is the war museum that discusses the Korean War and the prisoner of war (POW) camp that was housed there. The POW camp at its height was almost twelve square kilometers in size and housed close to 170,000 prisoners. The museum houses various exhibits – from uniforms, tanks, a mock-up a portion of the camp and a diorama that shows the uprising that led to the capture of an American general in 1952 by prisoners. For history buffs, this is probably one of the highlights of visiting Koje Island.

The other highlight that we saw was one of the largest shipyards in the world. It is owned and operated by Daewoo Shipbuilding and Marine Engineering. The shipyard is impressive in its sheer size. Offshore oil rigs and super tankers are some of the ocean-going structures produced there. In 2006, my wife, who is now a professional photographer, was commissioned to do a photo shoot for a German shipbuilding company which was constructing a large cargo ship near Koje.

As we toured the museum and enjoyed the stunning vistas of the heights of the island that stands on the edge of Korea looking over the Sea of Japan, I reflected back on the long history of this place. An island that once stood as a bastion against foreign invasion. An island that sheltered my father and his family during one of the darkest periods in Korea’s history. An island that experienced the tragedy of the division of this country. An island that represents all these past triumphs, sorrows and new hopes for the land of my ancestors. I wondered what would become of this island in the future and what changes it would go through. I wondered and I hoped.