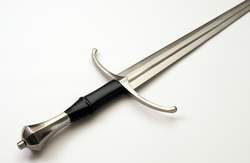 Through the little square of St. Anna, towards a certain tavern, where the best wine is to be quaffed in Seville, there walked in measured steps two men whose demeanor clearly manifested the soil which gave them birth. He who walked in the middle of the street, taller than the other by about a finger’s length, sported with affected carelessness the wide, slouched hat of Ecija, with tassels of glass beads and a ribbon as black as his sins. He wore his cloak gathered under his left arm; the right, emerging from a turquoise lining, exposed the merino lambskin with silver clasps. The herdsman’s boots–white, with Turkish buttons,–the breeches gleaming red from below the cloak and covering the knee, and, above all, his strong and robust appearance, dark curly hair, and eye like a red-hot coal, proclaimed at a distance that all this combination belonged to one of those men who put an end to horses between their knees and tire out the bull with their lance.

He walked on, arguing with his companion, who was rather spare than prodigal in his person, but marvelously lithe and supple. The latter was shod with low shoes, garters united the stockings to the light-blue breeches, the waistcoat was cane-colored, his sash light green, and jaunty shoulder-knots, lappets, and rows of buttons ornamented the carmelite jacket. The open cloak, the hat drawn over his ear, his short, clean steps, and the manifestations in all his limbs and movements of agility and elasticity beyond trial plainly showed that in the arena, carmine cloth in hand, he would mock at the most frenzied of Jarama bulls, or the best horned beasts from Utrera.

I–who adore and die for such people, though the compliment be not returned–went slowly in the wake of their worships, and, unable to restrain myself, entered with them the same tavern, or rather eating-house, since there they serve certain provocatives as well as wine, and I, as my readers perceive, love to call things by their right name. I entered and sat down at once, and in such a manner as not to interrupt Oliver and Roland, and that they might not notice me, when I saw that, as if believing themselves alone, they threw their arms with an amicable gesture round each others’ neck, and thus began their discourse:

“Pulpete,” said the taller, “now that we are going to meet each other, knife in hand–you here, I there,–_one, two_,–_on your guard_,–_triz, traz_,–_have that_,–_take this and call it what you like_–let us first drain a tankard to the music and measure of some songs.”

“Señor Balbeja,” replied Pulpete, drawing his face aside and spitting with the greatest neatness and pulchritude towards his shoe, “I am not the kind of man either for La Gorja or other similar earthly matters, or because a steel tongue is sheathed in my body, or my weasand slit, or for any other such trifle, to be provoked or vexed with such a friend as Balbeja. Let the wine be brought, and then, we will sing; and afterwards blood–blood to the hilt.”

The order was given, they clinked glasses, and, looking one at the other, sang a Sevillian song.

This done, they threw off their cloaks with an easy grace, and unsheathed their knives with which to prick one another, the one Flemish with a white haft, the other from Guadix, with a guard to the hilt, both blades dazzling in their brightness, and sharpened and ground enough for operating upon cataracts, much less ripping up bellies and bowels. The two had already cleft the air several times with the said lancets, their cloak wound round their left arm–first drawing closer, then back, now more boldly and in bounds–when Pulpete hoisted the flag for parley, and said:

“Balbeja, my friend, I only beg you to do me the favor not to fan my face with _Juilon_ your knife, since a slash might use it so ill that my mother who bore me would not know me, and I should not like to be considered ugly; neither is it right to mar and destroy what God made in His likeness.”

“Except–except my stomach also, for I was ever a friend to cleanliness, and I should not like to see myself fouled in a bad way, if your knife and arm played havoc with my liver and intestines.”

“I will strike higher; but let us go on.”

“Take care of my chest, it was always weak.”

“My dear Balbeja, there’s always plenty of time and space to hack at a man; I have here on my left arm a wen, of which you can make meat as much as you like.”

“Here goes for it,” said Balbeja, and he hurled himself like an arrow; the other warded off the thrust with his cloak, and both, like skilful penmen, began again tracing S’s and signatures in the air with dashes and flourishes without, however, raising a particle of skin.

I do not know what would have been the end of this onslaught, since my venerable, dry, and shriveled person was not suitable for forming a point of exclamation between two combatants; and the tavern-keeper troubled so little about what was happening that he drowned the stamping of their feet and clatter of the tumbling stools and utensils by scraping street music on a guitar as loud as he could. Otherwise he was as calm as if he were entertaining two angels instead of two devils incarnate.

I do not know, I repeat, how this scene would have ended, when there crossed the threshold a parsonage who came to take a part in the development of the drama. There entered, I say, a woman of twenty to twenty-two years of age, diminutive in body, superlative in audacity and grace. Neat and clean hose and shoes, short, black flounced petticoat, a linked girdle, head-dress or mantilla of fringed taffeta caught together at the nape of her neck, and a corner of it over her shoulder, she passed before my eyes with swaying hips, arms akimbo, and moving her head to and fro as she looked about her on all sides.

Upon seeing her the tavern-keeper dropped his instrument, and I was overtaken by perturbation such as I had not experienced for thirty years (I am, after all, only flesh and blood); but, without halting for such lay-figures, she advanced to the field of battle.

There was a lively to-do here; Don Pulpete and Don Balbeja when they saw Doña Gorja appear, first cause of the disturbance and future prize for the victor, increased their feints, flourishes, curvets, onsets, crouching, and bounds–all, however, without touching a hair. Our Helen witnessed in silence for a long time this scene in history with that feminine pleasure which the daughters of Eve enjoy at such critical moments. But gradually her pretty brow clouded over, until, drawing from her delicate ear, not a flower or earring, but the stump of a cigar, she hurled it amidst the jousters. Not even Charles V’s cane in the last duel in Spain produced such favorable effects. Both came forward immediately with formal respect, and each, by reason of the discomposure of his person and clothes, presumed to urge a title by which to recommend himself to the fair with the flounces. She, as though pensive, was going over the passage of arms in her mind, and then, with firm and confident resolution, spoke thus:

“And is this affair for me?”

“Who else should it be for? since I–since nobody–” they replied in the same breath.

“Listen, gentlemen,” said she. “For females such as I and my parts, of my charms and descent–daughter of La Gatusa, niece of La Mêndez, and granddaughter of La Astrosa–know that there are neither pacts nor compacts, nor any such futile things, nor are any of them worth a farthing. And when men challenge each other, let the knife do its work and the red blood flow, so as not to have my mother’s daughter present without giving her the pleasure of snapping her fingers in the face of the other. If you pretend you are fighting for me, it’s a lie; you are wholly mistaken, and that not by halves. I love neither of you. Mingalarios of Zafra is to my taste, and he and I look upon you with scorn and contempt. Good-by, my braves; and, if you like, call my man to account.”

She spoke, spat, smoothed the saliva with the point of her shoe, looking Pulpete and Balbeja full in the face, and went out with the same expressive movements with which she entered.

The two unvarnished braggarts followed the valorous Doña Gorja with their eyes; and then with a despicable gesture drew their knives across their sleeve as though wiping off the blood there might have been, sheathed them at one and the same time, and said together:

“Through woman the world was lost, through a woman Spain was lost; but it has never been known, nor do ballads relate, nor the blind beggars sing, nor is it heard in the square or markets, that two valiant men killed each, other for another lover.”

“Give me that fist, Don Pulpete.”

They spoke and strode out into the street, the best friends in the world, leaving me all amazed at such whimsicality.