In the Chamber of the Beggar Chief 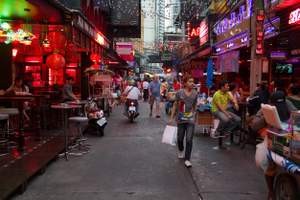 The name of this soi seems mysterious to me, as if it should belong to some powerful sultan from the ancient Middle East. In reality it simply means red-roofed pavilion, after the colour of the original, but now extinct, train station roof built here years ago. However, although no longer dotted with the homes of the rich and powerful, this area was indeed once renowned for its opulent mansions and beautiful gardens.

Although very few people are aware of it, a type of power structure still exists in this vicinity today, and one particular corner remains an important meeting place where complex hierarchies and loyalties are played out in a nightly hall of theatre. During the day the marketplace crackles with life as numerous stall holders hawk their varied wares and find favour with white-collared workers partial to somtum, gai tod and a large selection of miscellaneous bargains. But at night it is a gathering place for beggars, and I’ve heard that the sagacious old man who oversees them rules with discipline yet kindness, so it is to this famous chamber that I now make my way.

I’m not a very good beggar myself, having failed to adopt the required balance of pitiable destitution and appeal that makes people stop in their tracks. For this reason it is becoming increasingly difficult for me to survive, so tonight I will plead for help from this expert in the field. Every day he waits in the doorway of a convenience store on the main road. He does not shake his paper cup, nor does he plead verbally with the passersby. He merely sits like a stone sculpture on his plinth of three elevated steps, staring into the distance. A consummate master of his profession, those whom he favours are fortunate indeed, because what he receives he shares.

I tiptoe lightly across the marketplace. The adjacent soi is largely empty apart from a few small groups of young men hanging around in darkened doorways talking and laughing, reminding me that I should not be here alone. But the risk is secondary to my painfully empty stomach and, due to my nervousness, I’ve already put this introduction off for far too long. A rustling sound halts my progress and I listen attentively, all senses alert. Having witnessed rodents the size of felines in this vicinity before, I swiftly scan the shadows for any sign of rapid movement. After a few moments, two bright yellow eyes materialize in the gloom. I am a statue, but exhale gratefully as the creature slinks swiftly in the direction of a nearby drain and disappears into the murky void beneath.

Suddenly I glimpse a glimmer of light coming from behind the back wall and, following it to the source – a colourful mixture of flowers, food and flame surrounding an immaculately tended, steeply elevated spirit house – I see the one they call the beggar chief reclining in a hammock. One lazy eye observes me dispassionately and his naked, boulder-sized belly is displaced as he rolls heavily to a sitting position. His hair is a silver bird’s nest, long strands dangling like twigs across his wizened face. Perched on his hips is a pair of baggy black shorts incapable of containing his protruding stomach, and around his neck on a thick gold chain dangle five enormous amulets. I view this as a good sign.

Beside him stands another who is large and muscular, with a ridged scar puckering his cheek in a way that lifts the corner of his lip, giving his expression a permanent snarl. Other than this he looks surprisingly healthy for a beggar but his demeanour is distinctly hostile and he appears to be some sort of bodyguard. Scowling at my audacity in coming here uninvited, he puffs out his chest and takes one belligerent step towards me. But I hold my head high and the beggar chief halts his sidekick’s progress with a hand gesture as he leans towards me with apparent curiosity and interest.

Nevertheless a group of other sycophants now begins to shuffle forward, skirting the hammock in a protective manner, glaring threateningly and clearly resenting my intrusion. Will they ask me to leave? What an odd assortment of characters – the grey and elderly, young and naive, battered and scarred, and those afflicted by inexplicable, tragic disease. I lower my eyes respectfully at the latter but am not about to quit now. Taking a deep breath, I open my mouth to elucidate my request.

Suddenly, there is an eruption of sound from behind me. A mêlée has broken out in the marketplace and all heads immediately snap around in shock. Six young men are circling a mangy yellow soi dog for fun, while the wretched animal shivers and cowers against the wall, hopelessly trapped. The group surges menacingly, waving sticks in the air and, when their victim yelps in terror, they laugh and pull back, taunting mercilessly and feinting and thrusting ever closer. It is obvious they mean to enjoy some cruel sport with the unfortunate canine.

As a devout Buddhist, the beggar chief is incensed at this callous aggression towards a helpless creature. Besides, he does not wish to allow these unwelcome trespassers to proceed further into his private domain and discover his secret chamber, to which they might later return to possibly destroy. He springs to life with astonishing energy, his booming voice echoing loudly through the darkness as he shakes his fists and roars his justifiable rage.

The intruders freeze, surprised but not yet fearful, and turn their attention to him. His assembly of vagrants shrinks back at first, but they are also wary and prepared from long experience and, when the youths begin to advance towards their leader in an intimidating manner, they all leap into action at varying levels of ability. As the strongest, the bodyguard plunges in headfirst and is soon embroiled in aggressive combat with one of the bullies. Initially it seems they are evenly matched; however, although the largest of the beggars, the bodyguard is no match for the strong, well fed youth. Then within seconds a second aggressor breaks away from the others and approaches from behind, and in the gloomy light I just make out that he is wielding a heavy, lethal looking weapon.

My instincts kick in now; I become an automatic avenger. Adrenaline drowns exhaustion as I join in the defence, springing into action to protect the unsuspecting bodyguard. I leap onto the assailant’s back just as the large crowbar descends towards the bodyguard’s unprotected head. Taken by surprise, the youth stumbles and yelps. The bodyguard turns, sees him fall to the ground, and his eyes meet mine in silent gratitude and new respect. We continue to attack with fierce determination in the hope the ruffians will retreat. Although a mere motley army of poor and homeless, we nevertheless stand firmly together as we bellow and shriek at these interlopers, until before long their smirks fade at the realisation they are considerably outnumbered.

Then all of a sudden the beggar chief pulls himself to his full height, bronze amulets glowing against weathered brown skin and eyes alight with fierce indignation. As he steps forward, a nearby streetlamp shines directly onto his head, producing an eerie, ethereal effect that frightens the youths.

“Agh! Bap kheraah!” Bad luck! Let’s go! shouts one, instantly transmitting his superstitious terror to the rest. Those who were ready to continue the battle now hesitate, pulling back reluctantly and scowling. But we hold their gazes defiantly, a united front refusing to budge. They back away slowly and then turn to run, still yelling obscenities. Nevertheless we, the dispossessed, the unwanted, the unfortunates without a scrap between us, are the victors!

The old chief grunts happily, clearly satisfied. We follow in silence as he returns to his hammock to hold court. With great effort he rolls three large baskets into position in front of him. It is time. We gather around eagerly as he searches through them to ascertain the value of his daily takings. Some of the others are still eyeing me doubtfully, although now evidently becoming more willing to accept my presence.

The beggar chief beckons to his bodyguard first but to my surprise the latter inclines his battle scarred head in my direction and takes a couple of steps backwards. The old man raises his eyebrows and nods, as if satisfied with the humility of this response. Smiling, he gestures for me to come forward, and cautiously I approach. He reaches into a basket and proffers something to me, and at last I know I have been accepted.

I feel his hand rest gently on my head like a benediction. “Sunakh thi di” he whispers, Good dog! My tail wags wildly with immense gratitude as I retreat with the juicy pork knuckle – for this is my home now and I know I will never go hungry again.

Catherine Lee is a New Zealander who leads a nomadic existence overseas and is currently living in Thailand. Her interests include writing, reading, dancing and music, and over the years she has had articles, poetry and short stories published in magazines within Australia, Papua New Guinea, the Philippines, Singapore and Thailand. Previously a PA, she is now a freelance professional proofreader/editor and has also written editorials, reviews and press releases for various clients. Catherine has a passion for poetry with rhythm and metre and has been writing for as long as she can remember. A member of the Australian Bush Poets Association, FreeXpresSion, Henry Lawson Memorial & Literary Society and Metverse Muse (India), she derives immense satisfaction from both reading and writing poetry and has received awards from several prestigious competitions within Australia.