The Story of The Potter 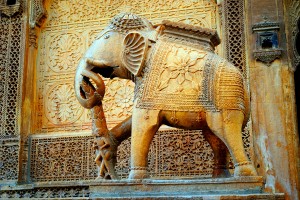 Once upon a time, there lived in a village a potter named Yudhishtira. One day, he drank a lot of liquor and got intoxicated and began running. He lost his balance and fell on broken pieces of a pitcher. The sharp edges of the pot pieces cut a big and bloody gash in his forehead. Somehow, he got up and went home. The wound took a long time to heal because he neglected to follow the instructions of the doctor.

Suddenly, a famine struck the whole country. The potter left the country with some others of the royal household. In the new country, he found a job with the king of that country. The king saw the mark of the big wound on his face and thought that Yudhishtira must have been a great warrior who suffered wounds in a battle. The king began showering special attention and affection on the potter, which the king’s sons envied. They could not harm him because he was the king’s favourite.

When everything was going smoothly for the potter, a war came and the king was summoning all known warriors to honour them and prepare them for the war. The king’s men were readying the elephants and horses for the combat while the soldiers were busy staging rehearsals. It was now time for the king to know everything about Yudhishtira.

He sent for the potter and asked him when no one was around, “What is your name, o warrior? In what battle were you injured?”

The potter told the king, “My lord, this is not a wound inflicted on me in a battle. I am a potter and my name is Yudhishtira. One day, when I was drunk, I ran and fell on sharp pieces of a broken pot. This scar on my face is the result of that fall.”

Ashamed that he deceived himself by the speech and garments of the potter, the king asked his servants to throw out the potter.

But Yudhishtira appealed to the king, “My lord, please don’t throw me out. See how well I will fight.”

The king said, “I admit you are a warrior. But you are born in a potter community and hence cannot kill an elephant.”

“How is that,” asked the potter.

The king then told him the following story.

A lion couple lived in a forest. In course of time, the lioness delivered two lion cubs. Every day, the lion went out and brought food for the lioness. One day, the lion wandered all over the forest in search of food but could not find any prey at all. At sunset, the lion gave up his search and was returning home when he found a jackal cub. The lion took a fancy for him and took him home and gave him to his wife.

The lioness asked her husband, “Did you get us any food today?”

“I haven’t killed him because he is a child. But if you are very hungry, you can have this child for your meal.”

The lioness was angry and asked her husband, “How can I kill him when you spared him his life?”

The elders have said:

“Don’t do an unworthy deed

Even in the face of death;

Don’t give up a worthy deed

Even if it means suicide.”

“I will treat him like my third son,” said the lioness.

Thereafter, the new jackal cub became one of the family and the three ate, drank, played and slept together. One day when they were playing, an elephant passed by. At once, the two lion cubs got ready to attack the elephant. The jackal cub told them that the elephant was an enemy of the lions and that it was better for them to leave. The lion cubs were disappointed at the words of their jackal brother.

They went home and told their father the details of how the jackal brother fled from the scene. The father was not happy with his children and admonished them. The lion took the jackal cub aside and told him not to discourage the lion cubs who, she said, were his younger brothers.

The jackal was hurt and asked his lion mother, “How am I different from them in beauty or education or bravery? Why should the two ridicule me? I will kill both of them.”

Amused by the words of the jackal cub and wishing him long life, the lioness said, “You are still a child. I brought you up taking pity on you. Your brothers are also young. Before they grow old and know that you are different from them, leave this place and join your own folk.”

Realising the danger ahead, the jackal cub left the lion family in search of his own folk.

“That’s why, before other warriors find out that you do not belong to the warrior caste, leave this place,” the king advised Yudhishtira. The potter immediately left the palace.