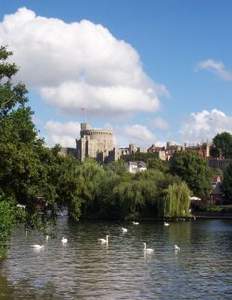 We picked up our hired 37ft deisel-powered barge in Kingston-upon-Thames, loaded up with stores and settled into what would become our abode for the next four days, sharing England’s longest river with an eclectic collection of craft and thousands of swans. Our particular vessel consisted of two cabins, an open cockpit which became another cabin when the seats were folded down, a tiny shower & toilet and a narrow galley. There were seven of us and two at a time were rostered for cooking and washing-up. The barge was quite easy to handle and, if any problems were to arise, it was comforting to know that a barge mechanic was only a phone call away. The daily hire cost was £30 per person, per day (approximately $75).

An added bonus to our trip was that it was the time of the Queen’s Jubilee celebrations and all the riverside properties and boats were gaily and patriotically decorated. Celebratory parties were in progress everywhere, both on and off the water, and a profusion of flags and people dressed in period costume added to the atmosphere. On our first night we anchored at Windsor, which was particularly regal, displaying bunting, heraldic figures and symbolism in every street and shop. At night we watched the Jubilee concert in The Donkey House pub and enjoyed the comeraderie of the locals.

Windsor castle, the chief royal residence in England, dominates the skyline in this Berkshire town and is the largest surviving castle in Europe; coming across the changing of the guard the next morning seemed to hold special significance at such a royal milestone. Exploring the shops and pubs on the tiny back streets of Windsor was very rewarding and we marvelled at the 17th Century Market Cross House (the crooked house), exquisite gift shops and the Parish Church of John the Baptist with its beautiful chancel and apse. Just across the river at Eton it was fascinating to discover ancient, low-ceilinged antique shops, the well-known Cockpit restaurant and of course Eton College which was founded in 1440 by Henry V1.

Travelling the lower and middle Thames as far as Henley, site of the famous regattas, the variety of architecture continually delighted the senses. We passed by dwellings which ranged from homely ‘weekenders’ to stately and historic mansions with elegant forecourts and terraces leading to the water. Ever-changing vistas presented themselves at the rounding of each bend, with ancient bridges, deshabille old summer-houses and the occasional abandoned house with ‘dark and gloomy’ charms of its own. Books from childhood and school history lessons were recalled as we glided through ‘Wind in the Willows’ territory and the island of Runnymede where King John signed the Magna Carta in 1215.

We pulled in at each village we came to and wandered the quaint alleyways and streets, getting a feel for the town and sampling the produce, such as bread from the local bakery, the ales of historic pubs or treasures from the many interesting bric-a-brac shops. Whenever the weather turned damp we passed a few hours reading or enjoying a board game in the comfy surrounds of our barge.

It was an interesting experience negotiating the various locks, including Bray, Boulters, Romney and others. Boulters Lock at the lower end of the lushly-wooded Cliveden Reach is particularly colourful with its bustle and activity and we gained a glimpse of what traffic and commerce must have been like on the river over the centuries.

Normally lock-masters operate the sluice gates but after 7pm you either pull in to the bank for the night or operate the locks yourself. At times, there was quite a traffic jam and often it took nearly an hour to complete the procedure. However, it gave us opportunities to investigate the delightful hedged lanes and the walking path which follows the 215 miles of the river. Known as the Thames Path, it is worthy of an expedition in itself as it is a marvellous way to observe the diversity of the Thames Valley.

A more leisurely holiday is hard to imagine, whether it be exploring the towns en route, refreshing oneself at the charming riverside inns or mooring in the countryside where you awake to thatched farmhouses and the rolling Chiltern hills in the distance. Clamber on to the bank and absorb the surroundings – what a thrill to climb a stile, enjoy a swathe of blue-bells or see squirrels darting about – common sights to the locals but enchanting to Australian eyes! You can block out the rest of the world and imagine you are virtually alone with nature.

Seeing the countryside from the perspective of the river added an extra dimension – you felt at one with the river, as though you were a part of the geography; what better way to spend a few days than “messing about on the river”. It was Elizabethan explorer Sir Walter Raleigh who said: “There are two things scarce matched in the universe – the sun in heaven and the Thames on earth”.