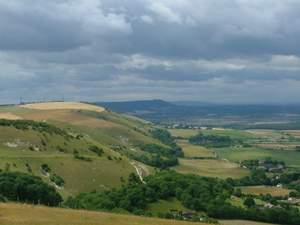 “Dave! Dave! Come quick! There are cows!” Jen’s eyes were wide with astonishment as she pointed excitedly to the brown and white faces peering over the fence.

“Oh course there are cows, Jen,” he said, putting an affectionate arm around his wife. “That’s what happens when you live next to a dairy farm.”

“You never told me our neighbours would be cows,” she laughed as she edged over to get a closer look. “Aren’t they adorable? I can’t wait to email Mom and tell her we live next to cows!”

Jen was a city girl through-and-through, having been born and bred in Manhattan. Dave was a Sussex lad who loved the majestic South Downs and undulating coastline. They say that opposites attract – and this was the case with Jen and Dave who literally ran into each other while jogging in New York City’s Central Park. While trying to avoid the same large puddle, they collided. Her 115 pounds were no match for his 190 pounds. Jen lost her balance and ended up in the muddy water.

“Well, in that case, will you let me buy you a cup of coffee?”

“I think you owe me an entire breakfast,” she said in mock indignation.

Soon they were exchanging life stories in a nearby bagel bar. Dave explained why he was living in Manhattan.

“I work for a computer software company in Brighton in England. They’ve sent me here to learn how their New York operation works.”

And so began their relationship which grew deeper and deeper as the months flew by. When the time came for Dave to return to England, he knew he could not bear to leave Jen behind.

“Marry me – and move to England.” Her response was an instant “Yes!”

While Jen packed up the apartment they had been sharing, Dave flew back and set about finding a place for them to live. He had beguiled Jen with descriptions of the beautiful Sussex countryside where he grew up.“You get the best of both worlds — the sea and the South Downs.” Thanks to computer links, she was able to ‘view’ houses, leaving Dave to make the final arrangements. All she had to do was arrive at Gatwick and be whisked down to their new home.

And here she was, only months later, admiring cows.

“What other surprises have you got for me?”

“Lots. As I’m still on holiday, I shall be your Sussex tour guide.”

The next morning dawned warm and sunny. Jen woke early, keen to get started. Dave, however, was still fast asleep. “Oh well. I’ll just go for a short walk by myself.” Wearing shorts, a T-shirt with strappy sandals on her feet, she set off for the woods at the top of the lane. The foliage was dense with summer growth.“Arrghh!” she cried out in pain. A red rash quickly emerged on skin. She rubbed her legs which only intensified the burning.

Dave was awake when she charged through the door minutes later.

“You’ve walked through a bed of stinging nettles,” he diagnosed, applying salve to the affected areas. “The traditional method is to rub dock leaves on nettle rash but this cream works better.”

“We don’t have stinging nettles in New York – or dock leaves, whatever they are,” she moaned. “What other traps are out there waiting for me?”

“Traps? I think it’s about time I educated you about country living. Stinging nettles aside, there are lots of wonderful things here – honest! Deer, butterflies, wild flowers. Shall we go?”

Soon they were exploring the downland near Chanctonbury Ring.

“This is a magical place,” Dave said. “Legend has it that Chanctonbury Ring was created by the Devil who lies in wait for strangers, offering them a bowl of soup in exchange for their soul.” Jen listened, rapt. “Another legend says that if a woman sleeps underneath these beech trees for only one night, she’ll soon fall pregnant.”

“Don’t get any ideas about camping out here, Dave. I haven’t become that countrified.”

As they ambled on, Dave scrutinised the grasses. “Here we are! A bee orchid.”

“Where?” Jen asked, expecting to see something lush and colourful, like the flamboyant South American orchids sold in Manhattan florist shops. “I don’t see anything.”

Dave knelt down to part the grass for Jen and pointed to the modest specimen at his feet. As Jen reached down to pick it, Dave thrust out an arm. “No! They’re endangered! Look and appreciate – but don’t pick!”

“Gosh! It looks like baby bees have landed on the stem! What little jewels they are. I’ll have to email Mom and tell her what an English orchid looks like.”

As part of his ongoing plan to ‘countrify’ his wife, Dave decided to take her fishing. She followed him up into the loft to inspect the gear he’d accumulated for this hobby.

As they manoeuvred past their stored suitcases, Jen cried out in disgust. “Yuk! What are all those pellets? Mice?”

Dave stopped to investigate. “Mystery solved,” he announced. Look up there.” Hanging upside down from a beam was a furry, leathery-eared bat, sound asleep.

“We’ll have to find out what to do about it. Bats are another endangered species.”

Dave phoned the local National Trust warden, Charlie Spencer, who came straight over. Delighted with the specimen he saw, Charlie said, “You’re honoured. This isn’t the common pipistrelle – it’s a rarer species, a Natterer’s bat. Well done, neighbours.” Then he picked up a pellet and rubbed it between his fingers and thumb. “You’d regret doing this if these were mouse droppings. They’d be all slimy. But bats eat insects so, as you can see, the droppings disintegrate like ash. Much cleaner, these beasties.” Charlie gave Jen and Dave a leaflet about bats. “I’m afraid you’ll have to let him stay here until he decides to leave. It’s very much ‘do not disturb’ with bats.”

“This is wonderful! I’ll have to email Mom!”

Dave gave his wife a hug. “You’re making great strides, Jen. A little while ago you’d have shrieked at the idea of mice in our loft, never mind a bat! Maybe you’re turning into a country wife.”

A few days later, while Dave was at work, Charlie’s wife Jill came round to introduce herself.

“Charlie told me all about your bat. Congratulations! I’ve come round to ask if you’d like to come over for coffee – say, Wednesday morning?”

Jen eagerly accepted the invitation and, as she entered the Spencers’ yard, four white birds came charging at her from different directions, honking and spitting aggressively. Jen froze. Jill heard the din and flung open the front door.

“Your ducks are attacking me!” Jen hollered.

“Shoo! Shoo!” Jill strode forth, getting the birds to scatter. “Sorry about that. I should have warned you. By the way, they’re geese, not ducks – and make a very tasty roast at Christmas time.”

“But aren’t they kind of like pets?” Jen asked as she entered the Spencers’ cosy kitchen.

“For the time being, yes. But one has to be practical in the country. Our kids are raising three lambs in the field behind the house. I’ll show you.” Jill handed Jen a mug of coffee and, carrying a plate of biscuits, ushered her out into the back garden. “We’ve named them Daisy, Maisie and Gracie. Sweet to look at but one day soon they’ll also be sweet to eat.”

“You’re not serious!” Jen couldn’t decide whether to believe Jill, who was smiling enigmatically. “I guess I’ve got a lot to learn,” Jen admitted. “For instance – what are those big black and white birds over there? I’ve seen them in my garden, too.”

“They’re magpies. There’s an old superstition about them. ‘One for sorrow, two for joy, three for a girl, four for a boy.’ My grannie used to panic if she saw only one magpie.”

“Something else to email my mother!”

As the weeks wore on, the two couples began to socialise more and more.

“It’s Charlie’s birthday next Saturday. Would you and Dave like to come round for dinner?”

The first course Jill served was soup made from home grown parsnips. Next came a platter of roast leg of lamb with all the trimmings. “Genuine South Downs lamb,” she announced.

Jen stared at the beautifully presented lamb, a lump in her throat. “Oh no! Which one?”

“This is indeed local lamb, but not that local!” Jill laughed.

“I’m so relieved! How could I email my mother and tell her that I’ve eaten Daisy, Maisie or Gracie?”

Autumn came and with it long walks during which Jen and Dave gathered sloes to make sloe gin. They collected sweet chestnuts from the abundant trees in the woods and roasted them in the oven. Dave cut up logs with his new chainsaw and Jen helped by stacking them neatly in the log store. He taught her how to lay a fire and bank it at night so as to revive it in the morning.

When spring arrived, Dave prepared the new vegetable bed for Jen who was keen to grow her own produce. He organised a delivery of manure from the nearby farm and when it arrived, Jen was by his side, eager to help in spreading it on the bed – until she encountered myriads of wriggling red worms. Flinging down her fork, she cried out, “Dave! I can’t do this!”

“Courage, girl! Think of the email you’ll be able to send your mom. ‘I fought off a horde of worms and won!’”

Spring turned into summer. Jen spent many hours cultivating her kitchen garden. She’d planted seed potatoes and Jill gave Jen some of her surplus tomato and courgette plants. With Dave’s help, Jen also grew sugar snap peas, rocket for salads and leeks. Particularly picturesque were her climbing beans – the red flowers of green runners mingling with the mauve flowers of purple ‘blauhilde’ climbers. Dave took myriads of photos of Jen’s produce which she emailed to her mother back in New York.

It was a hot – for England – August day when Dave proposed they pack a picnic and head off to West Wittering beach. Having seen the shingle on Worthing and Brighton beaches, Jen was thrilled to find miles of sand at West Wittering. The picture-postcard views of Chichester Harbour delighted her, as did the herons, egrets and plovers they encountered on their beach walk.

“Are you ready to brave the waters?” Dave asked.

Removing their outer clothes to reveal swimming costumes underneath, they headed off to the surf, hand-in-hand.

“Oh!” Jen shrieked as soon as the cold waters swirled around her ankles. “It’s like walking into ice cubes! I’m out of here!” She tore back to their picnic site and proceeded to dry her feet vigorously with a thick towel.

“Cowardy custard!” Dave yelled as he dived into a swell.

“I liked the scenery,” Jen told him later over a hot mug of tea in the comfort of their kitchen, “but you’ll never get me into the water ever again.”

“And I thought you were becoming a country wife.”

“Jen!” whooped a jubilant Dave, gathering her into his arms. “I think it must be the country air,” he quipped.

“Obviously…. And do you know what I’m going to do next?”