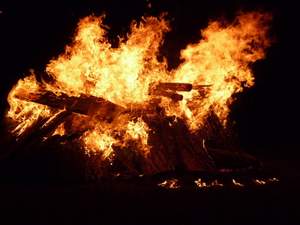 John was tired to his bones. He was on a walking holiday in the English Lake District and he had tramped for miles over the bleak and empty fells. His feet were sore and his legs felt as heavy as lead. His rucksack straps cut into his shoulders and his stomach rumbled with hunger. Then, to make matters worse, it started to rain … a thin cold rain that soaked through his clothes and chilled him. He needed to find a place to rest for the night. In his mind he had a vision of a welcoming country inn offering food, a hot bath and a soft, comfortable bed. He looked about hopefully but darkness had fallen and swirled around him like a thick cloak. He could barely see his hand in front of his face.

John stumbled on and at last came to a road. It was little more than a country lane but John’s spirits rose. He felt sure it would lead to a village or at least to a cottage where he could seek a bed for the night. He stepped out with renewed energy and, before long, he saw a dark shape looming up ahead of him. As he came closer he realised it was an inn, though not the one he had hoped to find. It was grim and gloomy and the windows were shuttered. There was not a glimmer of light showing anywhere. John’s spirits fell but he strode up to the front door and used the old brass knocker to announce his presence. A shaft of light appeared under the door and John heard bolts being pulled back and a key turning in the lock. A thickset man stood silhouetted in the doorway.

“You’re hammering is enough to wake the dead,” he grumbled.

“Sorry,” said John, “but I’ve been walking on the fells all day and I’m cold, soaked and famished. I need food, a hot bath and a comfortable bed or I won’t last the night.”

“Then it’s lucky for you that you’re here,” replied the man. “We pride ourselves on being the best inn for miles around.”

The landlord threw a couple of logs into the open fireplace and John warmed his hands on the leaping flames while steam rose from his wet clothes. Then he wolfed down a large bowlful of soup before making his way up to his room and a hot bath.

John glanced at his reflection in the mirror. His face was ghostly pale and dark shadows skulked beneath his eyes. He shook his head at his sorry appearance. It’s nothing that a good night’s sleep won’t put right, he told himself. He turned and tripped over his rucksack. He cursed his own clumsiness, picked up the rucksack and hung it from a hook on the wall. Then he climbed into bed, blew out the candle, pulled the covers up to his chin and quickly fell into a deep sleep.

John had no idea how long he slept but suddenly his eyes flew open. The darkness pressed down on him like a heavy blanket. He frowned, puzzled as to what had woken him. Then he realised that it was the acrid stench that filled his nostrils. Smoke! He couldn’t see it but he could certainly smell it. His brain was still fuddled with sleep and he couldn’t work out where the smoke was coming from. Then the old saying, “there’s no smoke without fire”, popped into his head and his heart lurched with fear. The inn must be ablaze and he was trapped on the upper floor. He heard running feet and distant shouts. People were escaping from the building but John lay in his bed unable to move. A great weariness filled his bones and it seemed to him that if he only pulled the blankets over his head and went back to sleep he would be safe.

Then, from just outside his room came a terrible crash. John sat up and dragged himself out of bed. He staggered and swayed and bumped into a wooden chair on which he had draped his clothes. He swept them up into his arms and commanded his aching legs to carry him to the door. He wrenched it open and nearly collided with a shadowy figure who rushed past him and disappeared into the darkness. Flames were licking the walls. A wooden doorway collapsed and an inferno of heat blasted along the passageway. John spun on his heel and dashed towards the stairs while blistering air scorched his back.

The stairwell was smothered in a fog of choking smoke. The stairs themselves had vanished. Frantically, John turned to find another way of escape but a wall of flame was advancing towards him. The fire roared like a furious dragon and its breath singed John’s hair. In despair he spun round and faced the pit where the stairs had been. There was nothing else for it. John had to jump into the swirling smoke. He had no idea where he would land but he buried his face in his clothes and leapt.

A smouldering banister broke his fall and sent him tumbling across the floor. He sprawled half dazed, then an old oak beam came hurtling down from the rafters in a shower of sparks and smashed into the ground next to him. John scrambled to his feet. Panic flooded his mind. His throat was like sandpaper, his skin was raw, he knew he was going to die. Then he felt a cool draft of air on his face. It was coming from a rectangle of pure darkness away to his right. He hurled himself towards it as another blazing beam fell behind him and the ceiling collapsed.

John found himself alive and standing on the stone path outside the inn. The rectangle of darkness was, in fact, all that remained after the front door had burned away. John stared as fire danced on the roof and red and yellow flames burst out of the windows. Suddenly it dawned on John that, although he had cheated death, he must fetch help for those still trapped inside. He sprinted off up the lane in search of someone, anyone, to come to the aid of the victims of the fire.

John ran until his lungs were bursting but there wasn’t so much as a cottage anywhere nearby. He was almost on his knees with exhaustion when at last he came to a small house. With renewed energy he raced up the garden path and banged on the door. An upstairs window was thrown open and a startled man demanded to know what on earth was the matter.

“Come quickly,” yelled John, ‘the inn’s ablaze and people are in deadly danger. You must help them.”

“Yes there is! It’s about two miles back down the road. You have to come. You can’t just leave people to their fate. I only just escaped with my life.”

When he realised that John was not going to go away the man slammed the window shut and came down to the door. After a great deal of argument, John finally persuaded the man and his brother to go with him to the inn. They thought he was mad and only went to keep an eye on him. When they arrived at the spot there was no fire and no inn. There were just the overgrown remains of an old ruin.

“I’ll tell you what must have happened,” said the man, “I bet you were so tired after walking on the moors all day you must have fallen asleep on your feet and had a nightmare, son. This place has been a ruin since before my grandfather’s time. Nobody round here even remembers what kind of building it was.” He shook his head and with a shrug he and his brother went home.

By now the sun was slowly climbing up into the sky and, by the early morning light, John could make out the layout of the ruin. He stepped over a pile of crumbling bricks and began to explore. He felt a chill shiver run up and down his spine like a spider and he shuddered. John was convinced that what he had experienced had not been a nightmare. It had been far too real for that. Then he saw what remained of the fireplace where he had warmed his hands. His mouth went dry with excitement. There was a gap in the stones where a door would once have stood and he walked through it. This led him to the stairwell. John glanced up at the moss-covered wall and along to where his bedroom would have been. His stomach knotted and his blood ran cold for there, high above his head, was a hook and dangling from it was his rucksack!