The Man Who Couldn’t Lose 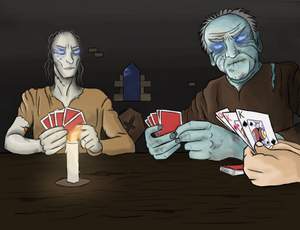 In the dank and dismal back streets of London, there once lived a parson who loved to play cards.  He practised every day and there wasn’t a game he couldn’t master. The parson neglected his duties at the church because he would rather play poker than say his prayers.

At first he just played against his friends for fun but one day he suggested that they play for pennies in order to make the games more exciting. His friends agreed and naturally the parson won. His friends wanted the chance to win their money back and so they played more games for higher and higher stakes. No matter how hard his friends tried to beat him, the parson always ended up as the winner. Then the day finally arrived when his friends refused to play anymore.

“You should challenge professional gamblers,” they said. “You’re good enough.”

The parson took his friends at their word and sought out the company of hardened gamblers in the low dives of Seven Dials. In the beginning these men thought the parson would be easy pickings but they were shocked at the skill with which he played. His fingers could make the cards dance when he shuffled the pack and he thought nothing of risking a fortune on the turn of a single card. His reputation spread like wildfire and people travelled from all over Europe to challenge him. But it seemed that lady luck was in love with the reckless parson for he never lost. However, the parson was not really interested in the money; he craved the thrill of winning.

At last even the professional gamblers refused to sit down to a game with him.

“No one can get the better of you,” they complained bitterly. “You won’t be happy until you’ve ruined us all.”

So the parson was reduced to disguising himself and visiting the inns and taverns of London where he tricked unsuspecting customers into playing games of chance with him. He would watch the men playing and then say that their game looked good fun. When they asked him if he wanted to join them he would smile innocently and say that he had never played before but that, if they didn’t mind, he would love to. Then he would proceed to fleece them of every penny they possessed.

Soon the word of his trickery spread all over the city until there remained not a single tavern where he was welcome. And no matter how cleverly he changed his appearance, his magic fingers gave him away the second they touched the pack. There was no one in the whole of London who was such a master of the cards and the parson found himself banned from all the places where people gathered to enjoy a game.

The parson was absolutely miserable that no one would play against him anymore. He cared nothing for the fact that a terrible plague was raging in the rookery of St Giles and his duty demanded that he visit the sick and the dying to comfort and pray for them. Bodies were being piled up inside his church but the parson had no interest in conducting the burial services. All he wanted was someone to challenge his skill at cards. He could think of nothing else.

One stormy night the parson sat alone in his room playing patience. Suddenly, he leapt to his feet and shouted, “No, this just won’t do. I will not play against myself. I am the greatest card player in the world but I need new opponents who are worthy of me.” Then his face lit up and he muttered to himself, “Ah, I think I know where I can find them.”

So saying he grabbed his candle lantern and swept out of his lonely room. He stamped across the graveyard and marched into the church. He placed his lantern down on an empty coffin, pulled out a deck of cards and said to the corpses lying on the floor, “The living won’t play me, lads, but surely you are not afraid to give me a game. After all, what have you got left to lose?”

The candle flame guttered and flared and the stone floor of the old church creaked and cracked as three of the corpses slowly sat up and climbed unsteadily to their feet. They shuffled over to the parson and sat down next to the coffin. A strange blue light glowed in their eyes.

“We will play you, Parson,” said one of the dead in a raw, harsh voice, “but not for money.”

“If not for money then what?” asked the parson.

“We will play for your life,” answered the corpse.

The parson grinned happily. “At last a game worth playing and a stake worth playing for,” he said.  “But I must warn you my friends that I never lose and I have no intention of losing tonight.”

The three dead men looked coldly at the confident parson. “Deal the cards,” was all they said.

The parson and the corpses played all through the night.  Sometimes it seemed as if the dead men were winning and sometimes the parson appeared to have the upper hand. Then finally, just before the cock crowed for dawn, only the parson and one corpse were left playing.

“The time has come, Parson” said the corpse, “to see whether you live or die. Show me your cards.”

“Fair enough,” replied the parson. “I have a terrific hand – Three kings and two queens. That’s a full house and nearly unbeatable.”

The dead man said nothing but just stared at the parson. The eerie blue light in his eyes burned very brightly. The parson swallowed hard.

“What cards do you hold?” he asked nervously.

“I have two pairs,” said the sinister figure.

The parson gave a huge sigh of relief, then his usual proud expression returned. “Then I’m afraid I win,” he said smugly. “A full house beats two pairs.” He stood up and turned to leave.

“But you haven’t seen my cards yet,” said the corpse.

The parson turned back and said, “All right, my friend, if you insist. Show me your cards.”

The parson gasped with horror and then fell lifelessly to the floor.

When the good people of the parish came to the church later that morning to say their prayers, they discovered the body of the parson but, try as they might, they could not prise the cards from his cold, dead fingers.