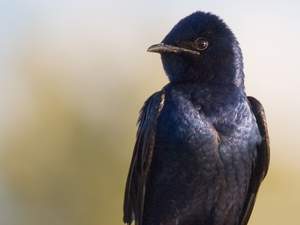 Strange name for a bird? Yes! When you read the story that got it the name, hopefully you will have a good laugh and feel some sadness at the same time.

We lived in southern Oklahoma. I had finally realized a lifelong dream of owning a place in the country. It was a “ranch” of ten acres, a few miles from Blanchard. I had been in sales and management for many years longing to escape the business world. The “farm” allowed me to do that at least on weekends.

We had lived there about a year, getting things fixed up like we wanted them when I retired. I read in a magazine about purple martins. The birds and their annual migrations interested me, so I bought a martin house. I knew absolutely nothing about how to attract martins. I did get a little information about how to mount the house so as to attract them. Also, in the box that the house came in was a card that would gain membership of the Purple Martin Conservation Association. I sent it in thinking it was a sales effort and it was, but it also contained many things that had been tried and proved for establishing a colony.

Each season I learned something new and also benefited from articles by others who had established and maintained a colony earlier. Their stories of “trial and error” saved me from making many mistakes.

One such story told of a couple who had “inherited” a nest of young martins with eyes not yet open. They put them in a shoe box and fed them with an eye dropper. They whistled each time they fed them and, when the birds were fledglings and unable to fly, they continued whistling when feeding. The birds, having become accustomed to the whistle while unable to see, were not alarmed at humans at all. It seems that martins are people-friendly anyway. As the birds matured, they were placed in a wooden box near the martin house. Feeding time was always preceded by the same whistle. When the birds finally learned to fly, which required some coaxing, they had the feeding call embedded in memory. The colony caretakers could go out into their yard and whistle. Shortly a purple martin would appear and land on the outstretched hands. The others would come and do the same. A wonderful bond between man and wild creature.

Upon learning that only sixty percent of the martin house would be inhabited and that the first birds to arrive in spring would attempt to claim two compartments, I knew that if I wanted a larger colony I must provide additional housing. I bought another house.

Further education on my part and information from the Purple Martin Update Magazine showed how fortunate I had been in establishing this colony. The houses were not far from a small lake (martins drink “on the fly”), the location was on top of a small hill and there was an abundant supply of food – from the mosquitos at the lake to the numerous other flying insects that can be found in the open countryside.

The colony did grow rapidly. When I was forced to leave the farm because of ill-health, I had three twelve-compartment houses, four with twenty-four, one homemade with twelve compartments and forty eight gourds that accommodated one family each. I added gourds every year. I even grew my own. The first gourds were plastic and easier to clean but somewhat expensive.

Scratch? Well, while I was still working and living in southern Oklahoma, I came home late one Friday to pick up my wife as I had to be in a business meeting at Grand Lake in northern Oklahoma the next morning at eight o’clock. Grand Lake is only a three hour drive from the farm and we had elected to stop over there on Friday night in order for me to attend the meeting the next day – and managers are always expected to be at meetings early!

When I arrived at the farm that Friday evening, darkness approaching, my wife informed me that there was a bird “flopping around” in the back yard. Upon investigation I found a young martin with eyes open but unable to fly. I did not want to lose even one of “my” birds so I picked up a bushel basket (not the plastic kind), put the bird in it and covered it with a towel. I placed it in the back seat of the car and told my wife “He’ll just have to go with us, something will get him if I leave him on the ground.”

My wife, always the practical one asked, “And just what are you going to do with a baby bird at the meeting?”

“I’ll think of something” I replied.

“That’s what I’m afraid of,” was her answer.

We loaded up and headed for Grand Lake with the bird in the covered basket. Throughout the entire trip this young frightened bird scratched his way around that basket until it was quite annoying. My wife looked at me as if she were looking at a lunatic. (However, I am accustomed to that more than to a scratching bird.)

We made the motel and unloaded bird and all. The bird basket sat on a table. We were there two nights and both nights I would regularly feel a sharp elbow in my ribs.

“Your baby needs to be fed” the voice came from the other side of the bed.

I would get up and go looking for bugs in the night. Now there are bugs in the summer nights in Northern Oklahoma but they are not easy to catch. I was out near the pool lights trying to catch moths when I came upon a “gold mine.” There was a large population of June bugs that year and many drown in the pool – from then on, I had a ready supply. I even went to the chef early one morning and asked for raw hamburger. After scrutinizing me carefully with much the same look as my wife had given me, he reluctantly gave me a small round ball of it. Now “Scratch” would eat “high on the hog” (or perhaps a different place on a beef steer). At least it was a change from a steady diet of June bug.

Scratch was one of those names we sometimes have forced upon us by circumstance or events and are unable to change or lose it.

Each year for four years when the martins came to the farm, I could walk out in the yard and whistle the same feeding whistle and a lone purple martin would come to fly closely in front of my face. I would like to tell you that he landed on my hand but he did not, even though I held out a piece of hamburger meat.

He did not come on the fifth year or ever again.