A Walk on the Brooklyn Bridge 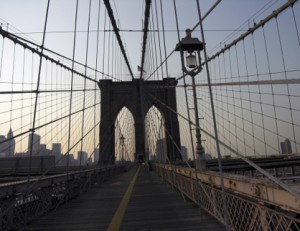 It was a beautiful summer day in New York City. It was a day made for walking. John was standing at an intersection near the Brooklyn Bridge. He had driven over the bridge before. But he had never walked over the bridge. He started walking uphill on the pedestrian path. Many people were walking ahead of him. Many people were also walking toward him. They were coming from the Brooklyn side of the bridge. A bicycle path was next to the pedestrian path. Some pedestrians were walking on the bike path. A bicyclist approached. He rang his bicycle bell. Walkers slowly got out of his way. He kept ringing his bell. John continued walking uphill. A man was standing next to a large ice chest. He was selling bottled water. “One dollar! One dollar! Ice cold water!” he shouted. John wasn’t thirsty. He wondered how heavy that ice chest was.

Next to the man were about 30 drawings. They were clipped to the fence beneath the handrail. There were drawings of bridges and buildings. There were drawings of people’s faces. All the drawings were black and white. John thought they were beautiful. He couldn’t believe the price. Each drawing was only $10. They were all about 8 inches by 11 inches. “These are so beautiful,” he told the man. The man was sitting on a folding chair. There was another folding chair next to him. “Thank you,” he said. “I from Russia. English no good.” John said, “But your art is very good.” “Sit, sit,” the man said. “You, you.” The man pointed at John with his pen. He pointed at the empty chair. “You want to draw me?” John asked. “Sit, sit,” the man said. John said he didn’t have time. Maybe he would stop on the way back.

The man looked at John. “Sit, sit,” he repeated. John smiled. He waved goodbye to the man. Maybe I should buy a few drawings on my way back, he thought. Maybe that old man will be famous some day. Maybe my drawings will be worth millions. He could see the Statue of Liberty. It looked so small. There were many ships and boats on the river. Some boats were full of tourists. They were going to the Statue of Liberty. They were circling Manhattan Island. John reached the first of the two towers. He looked up. It said “1875” on the tower. Vendors were selling T-shirts, CDs, food, and drinks. People were taking pictures and reading plaques. John admired the tower. He admired the view. Half an hour later, he started walking toward the second tower. What a pleasant time he was having! What a pleasant time everyone was having!