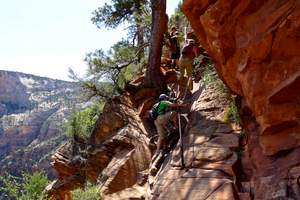 The only reason I decided to sign up for the geology field trip was because Lauren’s name was on the sheet, two slots up. I printed my name, Nic Colter, and then glanced back at her. Those warm hazel eyes were fixed on the whiteboard at the front of the room, but they strayed my way. A soft, Mona Lisa kind of smile passed over her lips and then her attention turned back to the board.

Oh, yeah – I faced forward again – this would be excellent. I’d been trying to work up the nerve to ask Lauren to the Homecoming dance and a field trip would be the perfect time to test the waters. No sense diving in if the pond was going to freeze over.

But then I glanced through the rest of the list. Zach Rogan was there, too. He would probably be thinking the same thing, and he had the upper hand. He and Lauren were on student council together. I went to pass the sheet on, but jerked it back again. The subheading on the paper seemed to scream at me:

No. Not that one.

As I left the classroom, I pulled a permission slip from Mr. Beadle’s outstretched hand, but couldn’t help glaring at the top of his head. I thought we’d be taking an identify-the-rock walk through the canyon, maybe have a little water fight in the Virgin River. What were we supposed to do at Angel’s Landing? Count the strata layers as we plummeted to our deaths?

“Nic!” A call came from behind me. I turned to see Lauren and her friend Aly.

“So you’re going on the field trip?” She pointed at the permission slip I death-gripped.

“Um, yeah,” I looked at it, wishing for brilliant conversation to flow from my mouth.

Lauren smiled and my brain dislocated even more.

“Have you been there?” She pointed upward, as if the lethal butte were right there, in the middle of the hall. I looked up and she laughed. “Angel’s Landing, I mean.”

“No.” Just thinking about it made my palms ooze.

“It’s amazing.” She patted my arm as she passed. “Trust me.”

I stood alone in the middle of the after-school exodus and stared at my permission slip. Half of me wanted to rip it up. The other half, to kiss it.

I laid the slip in front of my mom. If I was hoping she’d fear for my life and forbid me to go, I was a sadly neglected child.

“Fun!” She scrawled her name across the line. “Can I go? Do they need chaperones?”

“Nope.” I snatched it back. Having my mother there to hold my hand was not what I needed.

Next stop, the internet. The search, how to cure fear of heights.

One article told me to think good thoughts. Right. Another said to desensitize myself. That might work. Maybe if I looked at pictures of the trail.

I typed in Angel’s Landing and something even better than pictures came up – a video a guy made with a camera strapped to his head. I clicked play and, for seven highly edited minutes, lived the hike through someone else’s eyes.

Red rock fell away to eensy green foliage a thousand feet below. Hands gripped a chain and feet tight-walked a narrow ridge of stone. When the motion finally stopped, my palms weren’t the only sweaty things on me. I was practically a puddle. And my stomach heaved.

I was in big trouble.

The day of the hike was, unfortunately, beautiful. I’d prayed for rain but Mr. Beadle must have been praying harder. As the bus drove into the park, the sky was a shocking blue against the crimson cliffs.

We spilled out of the shuttle at the Grotto stop and Mr. Beadle waved us into a huddle.

“We’ll gather at Scout Lookout for a snack,” he said. “If you’d rather not cross to the landing, that’s fine. One of our chaperones will stay back.” He grinned, then turned around and pointed straight up, about half a million miles, to the top of the sandstone monolith. “I’ll see you up there.”

Somehow, I fell into step beside Lauren and Aly. We passed a warning sign and I averted my eyes, trying hard not to see the tiny person tumbling to her tiny death. I maneuvered myself to be on the inside, next to the cliff wall, as we worked our way up the switchbacks.

Part way up, I scraped together my courage.

“So, who’s been asked to Homecoming?”

They listed a few names. No mention of themselves. So far, so good.

We paused for a picture at another sign – Sensitive Wildlife, it claimed.

Zach came up behind us. “Here, Nic.” He handed me his cellphone. “Take one of me and Lauren.”

They posed next to the sign with their fingers to their lips. Ssshhh.

“Thanks, dude.” Zach grabbed his phone from me, turned and started walking. He was now next to Lauren.

I watched him, his head bent her way, heard her laugh at whatever he was saying and saw my chances of a date dwindle with each step. Next thing I knew, we’d reached the top of the second switchback, Walter’s Wiggles.

Aly called for a breather.

“Go ahead,” Lauren said to Zach, and she sat down on a stone shelf next to Aly. I came up level with them but wasn’t sure what to do, whether they needed some private girl talk or not.

“So Nic,” Lauren motioned me closer with a finger, “who are you asking to Homecoming?”

Lauren looked at Aly and they giggled.

Before I could interpret that, they jumped up and swept us into forward motion again. We rounded a bend and came upon an open area with restrooms and a few scrub trees. One of the chaperones handed out drinks and trail mix. Zach sat on a rock, sipping at a juice box. His eyes launched missiles at me.

I shied to my right and saw, in the not-too-far distance, what looked like the bony neck ridge of a giant dragon rising into the air. Some demented person had fastened chains to its neck and people were actually climbing it.

“Nic.” Lauren’s voice echoed like she was in a tunnel. “Are you OK?”

I pulled my eyes from the horror that was the upcoming trail and found Lauren’s hazel ones only inches away. Somehow, they revived me enough that I could sit, rather than topple onto whatever was behind me.

Wrong was that here I went, devolving into a heaving puddle. Any second now and she would become revolted and walk away.

I waited. Still, she sat there, her face concerned, waiting back. “What is it, Nic? Are you sick?”

“Heights bother you?” Her eyes widened, “but you’ve done really well so far.”

“Did you know it would be a problem?” she asked.

I glanced Zach’s way. Aly sat next to him, chatting. It had to be now, but scaling dragon spikes couldn’t be much harder. I sucked in a breath.

“I came because I wanted to spend time with you, maybe figure out if you’d go to Homecoming with me if I asked.”

That soft, Mona Lisa smile crept over her lips. “Nic, you didn’t need to come to figure that out, “I’ve been giving you hints for a while.”

She nodded and a breeze seemed to blow across the lookout, drying my sweat, soothing my stomach.

“I’ll stay here with you if you want,” she said.

“No,” I said, because she’d been looking forward to it. “I’ll be fine. Besides, I feel like I’ve done the hike already. I watched a video.”

“You did?” Horror struck her face. “No wonder! That’s a hundred times worse than doing it yourself. Come on.” She grabbed my hand and pulled me to my feet. “You can do it.”

She kept hold of me all the way to the beginning of the chain. “Just concentrate on the climb,” she said, “I’ll go in front in case you need me.”

She smiled, and this time my brain engaged. Good thoughts: Homecoming with Lauren.

Hands on chain, feet on rocks, I surmounted that red dragon. Whenever I faltered, Lauren’s hand was there. Then the top of the butte spread before me and the whole gorge lay at my feet.

“Angel’s Landing.” Lauren squeezed my arm. “You did it.”

I did. And I discovered something along the way. The angel has hazel eyes. 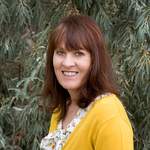 Alison L. Randall is the author of a picture book, The Wheat Doll, and of numerous short stories in various print and online magazines. Alison lives in Utah, where she enjoys exploring its natural beauties with her husband and three mostly-grown kids.
Website: alisonlrandall.com