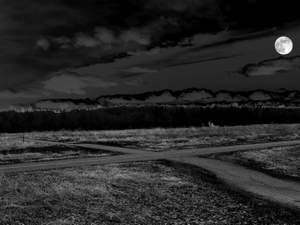 Clarksdale, Mississippi. It’s hot as hell, even at near midnight, but it seems appropriate. Hell’s exactly what I’m looking for, isn’t it?

I’ve never been to the Mississippi Delta before and I never would have come if an old legend hadn’t brought me here out of curiosity. Aw, let’s cut the crap, no mere curiosity could have made me spend my last bit of savings on a trip to the crotch of America. I’m just simply not one for heat that strangles you and covers you in constant dampness like the inside of the Swamp Thing’s mouth. No, it wasn’t curiosity or the search for knowledge, or even getting to the bottom of a good story. Desperation drove me here. Desperation, and a realization that I have nothing left to lose. If I can’t finish my story in three weeks I’ll literally have nothing. Actually, less than nothing because I’ll have broken my contract with my publisher and I will owe them more money than I’ve ever seen in my whole life. My life story. I finally see my first break, someone finally discovers me and now I’ve got writer’s block for the first time in my life. I couldn’t write to save my own skin.

That is why I am here, at the crossroads, where Robert Johnson was supposed to have come, along with many others, to meet the devil and bargain for my soul. I figured, what the hell? If this doesn’t work I’ll just keep heading south and get lost or killed somewhere in Central America. I have a typewriter and I am typing now because, as the story goes, you are supposed to be playing your guitar just before midnight on a moonless night. I’ve never heard of a writer coming to the crossroads, but I don’t see why the devil would care who’s soul he was getting so long as he had a soul. I bought the typewriter at a thrift store because I figured a laptop didn’t fit the myth as well. I’ve never even typed on a typewriter, and I’m seeing why they’re artifacts of the past. Though these keys are much more satisfying to pound on.

11:55: I’m not going to lie. I’m feeling a little creeped out. I’m bordering on terror because a minute ago there was that never-ending chorus of cicadas just screeching away and now, nothing. I’ve never heard such a silence. And there’s no moon, so it’s dark as you could dream. The really eerie part is that there are no clouds either, but I can’t see a single star. It just got awfully cold too. You’d think I’d welcome a little cool down after all this oppressive heat, but this is something different. There’s no breeze, not a whisper of a single leaf. But then, 11:59, is that a footstep?

He’s here! He’s walking up to me and I’m barely controlling myself enough to keep from soiling my pants, but my fingers won’t stop moving. I am not writing any of this. My hands and wrists are burning, my fingers ache, but it’s not me. I have no control. I’d run like hell out of here if I could, but I’m stuck and I can’t stop typing. He’s coming. There’s a smell in the air now, it’s like fire, but not the nice kind of wood fire from camp. It’s like a fire from something so hot it melts rock, and it smells like burning flesh. And there’s an eggy smell, sulphur? Brimstone? And the heat is back. It’s worse than ever. I feel like my skin is blistering. He’s just a few steps away. Black as a shadow, tall as a tree. He’s got no face, no body, no nothing that I can see. He’s a black hole wearing darkness as a cloak. But as he comes closer I can see his eyes. They are red as blood, burning like flames, and they are killing me slowly. I can’t look away. And then his mouth opens and his teeth are white as snow, but sharp like lion’s teeth, or some predator that could make lions bow in fear.

“Hello, Simon,” he says with a smile.

That smile is worse than anything else. I’d take a bath in the fiery lake before I’d take that smile.

And he reaches for the typewriter. The smell of him so close is making me choke and gag. He bends low and….

This man’s soul now belongs to the Morningstar. I, Lucifer, do hereby claim Simon Peter Alma’s eternal light in the name of Hell and the black abyss in exchange for the gift of tongues and the undying song of the muse for all his mortal days.

The typewriter returns to me. I heard the words as he typed them as if the good earth had opened up and hell was speaking from its bowels. I know this contract is made, unbreakable. I know there is now nothing I can do. Though now the regret buries me under mountains of sorrow, my fingers will not be still. Will they ever cease for the rest of my days?

The devil stands over me for a few more moments, as if taking in his prize. He holds out his hand and inhales. From my mouth and eyes a bright pain issues forth. Something leaves me, I am filled with the deepest sense of loss and incompleteness that I have ever known. I understand that this will be my constant state for the rest of my life. All I can do is type.

He takes one last look at me and smiles that torturous smile.

“I’ll see you around, kid.” His voice is like razors scraping glass and shattering inside my head.

He disappears into the darkness and I am left alone. A shell, a hollow instrument. I met the devil at the crossroads and I made a deal. I lost everything. All I can do is write. 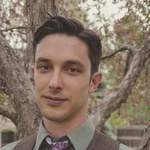 Levi Andrew Noe is a writer of fiction and non-fiction for children and adults and is an award winning poet. Born and raised in Denver, Colorado, he is a traveler, a yogi, a cyclist, a snowboarder and an entrepreneur, among many other things. Levi won first prize in 2011 and 2013 in Spirit First’s international poetry competition. His works have appeared in River Poets Journal, Elephant Journal, Twisted Vine, amphibi.us, knoji.com, thedenverdust.com and Japan Travel. Levi’s first published children’s book One Day as a Raven, is available in the Kindle store.
Rocky Mountain Revival Literary Podcast: http://leviandrewnoe.podomatic.com/
Blog: http://leviandrewnoe.wordpress.com
Facebook: https://www.facebook.com/levi.a.noe
Twitter: @leviandrewnoe