I. Snaring the Sun 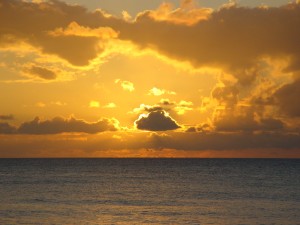 Maui was the son of Hina-lau-ae and Hina, and they dwelt at a place called Makalia, above Kahakuloa, on West Maui. Now, his mother Hina made kapas. And as she spread them out to dry, the days were so short that she was put to great trouble and labor in hanging them out and taking them in day after day until they were dry. Maui, seeing this, was filled with pity for her, for the days were so short that, no sooner had she got her kapas all spread out to dry, than the Sun went down, and she had to take them in again. So he determined to make the Sun go slower. He first went to Wailohi, in Hamakua, on East Maui, to observe the motions of the Sun. There he saw that it rose toward Hana. He then went up on Haleakala, and saw that the Sun in its course came directly over that mountain. He then went home again, and after a few days went to a place called Paeloko, at Waihee. There he cut down all the cocoanut-trees, and gathered the fibre of the cocoanut husks in great quantity. This he manufactured into strong cord. One Moemoe, seeing this, said tauntingly to him: “Thou wilt never catch the Sun. Thou art an idle nobody.”

Maui answered: “When I conquer my enemy, and my desire is attained, I will be your death.” So he went up Haleakala again, taking his cord with him. And when the Sun arose above where he was stationed, he prepared a noose of the cord and, casting it, snared one of the Sun’s larger beams and broke it off. And thus he snared and broke off, one after another, all the strong rays of the Sun.

Then shouted he exultingly: “Thou art my captive, and now I will kill thee for thy going so swiftly.”
And the Sun said: “Let me live, and thou shalt see me go more slowly hereafter. Behold, hast thou not broken off all my strong legs, and left me only the weak ones?”

So the agreement was made, and Maui permitted the Sun to pursue its course, and from that time on it went more slowly; and that is the reason why the days are longer at one season of the year than at another. It was this that gave the name to that mountain, which should properly be called Alehe-ka-la (sun snarer), and not Haleakala.

When Maui returned from this exploit, he went to find Moemoe, who had reviled him. But that individual was not at home. He went on in his pursuit till he came upon him at a place called Kawaiopilopilo, on the shore to the eastward of the black rock called Kekaa, north of Lahaina. Moemoe dodged him up hill and down, until at last Maui, growing wroth, leaped upon and slew the fugitive. And the dead body was transformed into a long rock, which is there to this day, by the side of the road.

II. The Origin of Fire

Maui and Hina dwelt together, and to them were born four sons, whose names were Maui-mua, Maui-hope, Maui-kiikii, and Maui-o-ka-lana. These four were fishermen. One morning, just as the edge of the Sun lifted itself up, Maui-mua roused his brethren to go fishing. So they launched their canoe from the beach at Kaupo, on the island of Maui, where they were dwelling, and proceeded to the fishing ground. Having arrived there, they were beginning to fish, when Maui-o-ka-lana saw the light of a fire on the shore they had left, and said to his brethren: “Behold, there is a fire burning. Whose can this fire be?”

And they answered: “Whose, indeed? Let us return to the shore, that we may get our food cooked; but first let us get some fish.”

So, after they had obtained some fish, they turned toward the shore; and when the canoe touched the beach Maui-mua leaped ashore and ran toward the spot where the fire had been burning. Now, the curly-tailed alae (mud-hens) were the keepers of the fire; and when they saw him coming they scratched the fire out and flew away. Maui-mua was defeated, and returned to the house to his brethren.

Then said they to him: “How about the fire?”

“How, indeed?” he answered. “When I got there, behold, there was no fire; it was out. I supposed some man had the fire, and behold, it was not so; the alae are the proprietors of the fire, and our bananas are all stolen.”

When they heard that, they were filled with anger, and decided not to go fishing again, but to wait for the next appearance of the fire. But after many days had passed without their seeing the fire, they went fishing again, and behold, there was the fire! And so they were continually tantalized. Only when they were out fishing would the fire appear, and when they returned they could not find it.

This was the way of it. The curly-tailed alae knew that Maui and Hina had only these four sons, and if any of them stayed on shore to watch the fire while the others were out in the canoe the alae knew it by counting those in the canoe, and would not light the fire. Only when they could count four men in the canoe would they light the fire. So Maui-mua thought it over, and said to his brethren: “To-morrow morning do you go fishing, and I will stay ashore. But do you take the calabash and dress it in kapa, and put it in my place in the canoe, and then go out to fish.”

They did so, and when they went out to fish the next morning, the alae counted and saw four figures in the canoe, and then they lit the fire and put the bananas on to roast. Before they were fully baked one of the alae cried out: “Our dish is cooked! Behold, Hina has a smart son.”

And with that, Maui-mua, who had stolen close to them unperceived, leaped forward, seized the curly-tailed alae and exclaimed: “Now I will kill you, you scamp of an alae! Behold, it is you who are keeping the fire from us. I will be the death of you for this.”

Then answered the alae: “If you kill me the secret dies with me, and you won’t get the fire.” As Maui-mua began to wring its neck, the alae again spoke, and said: “Let me live, and you shall have the fire.”
So Maui-mua said: “Tell me, where is the fire?”

The alae replied: “It is in the leaf of the a-pe plant” (Alocasia macrorrhiza).

So, by the direction of the alae, Maui-mua began to rub the leaf-stalk of the a-pe plant with a piece of stick, but the fire would not come. Again he asked: “Where is this fire that you are hiding from me?”
The alae answered: “In a green stick.”

And he rubbed a green stick, but got no fire. So it went on, until finally the alae told him he would find it in a dry stick; and so, indeed, he did. But Maui-mua, in revenge for the conduct of the alae, after he had got the fire from the dry stick, said: “Now, there is one thing more to try.” And he rubbed the top of the alae’s head till it was red with blood, and the red spot remains there to this day.

III. Pele and the Deluge

All volcanic phenomena are associated in Hawaiian legendary lore with the goddess Pele; and it is a somewhat curious fact that to the same celebrated personage is also attributed a great flood that occurred in ancient times. The legends of this flood are various, but mainly connected with the doings of Pele in this part of the Pacific Ocean. The story runs thus:

Kahinalii was the mother of Pele; Kanehoalani was her father; and her two brothers were Kamohoalii and Kahuilaokalani. Pele was born in the land of Hapakuela, a far-distant land at the edge of the sky, toward the southwest. There she lived with her parents until she was grown up, when she married Wahialoa; and to these were born a daughter named Laka, and a son named Menehune. But after a time Pele’s husband, Wahialoa, was enticed away from her by Pele-kumulani. The deserted Pele, being much displeased and troubled in mind on account of her husband, started on her travels in search of him, and came in the direction of the Hawaiian Islands. Now, at that time these islands were a vast waste. There was no sea, nor was there any fresh water. When Pele set out on her journey, her parents gave her the sea to go with her and bear her canoes onward. So she sailed forward, flood-borne by the sea, until she reached the land of Pakuela, and thence onward to the land of Kanaloa. From her head she poured forth the sea as she went, and her brothers composed the celebrated ancient mele:

O the sea, the great sea!
Forth bursts the sea:
Behold, it bursts on Kanaloa!

But the waters of the sea continued to rise until only the highest points of the great mountains, Haleakala, Maunakea, and Maunaloa, were visible; all else was covered. Afterward the sea receded until it reached its present level. This event is called the Kai a Kahinalii (Sea of Kahinalii), because it was from Kahinalii, her mother, that Pele received the gift of the sea, and she herself only brought it to Hawaii.

And from that time to this, Pele and all her family forsook their former land of Hapakuela and have dwelt in Hawaii-nei, Pele coming first and the rest following at a later time.

On her first arrival at Hawaii-nei, Pele dwelt on the island of Kauai. From there she went to Kalaupapa,1 on the island of Molokai, and dwelt in the crater of Kauhako at that place; thence she departed to Puulaina,2 near Lahainaluna, where she dug out that crater. Afterward she moved still further to Haleakala,where she stayed until she hollowed out that great crater; and finally she settled at Kilauea, on the island of Hawaii, where she has remained ever since.