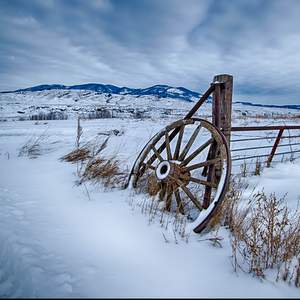 There was a time when he’d just ride up and say hello.

She would flash a nice but shy smile and welcome his company.

Now the old cabin was empty and winter’s fingers had frosted even the inside of the once cheery room.

He reined up on a knoll above the bench of land where the log fence ended in a scattering of timbers. He thought about her. Wondered what she and her children would be doing this cold, cloudy day. He got off his horse, squatted there holding the reins, just letting his mind wander.

He thought about the day he took her and the three young’ns to see all the prairie animals. The little girl took a tumble and cut her head. She was a brave one. There was a bit of blood, but she took it good and just wanted to see more animals.

Antelope just don’t stay around when you yell out like she did. The bleedin’ stopped and a lump swelled a mite but she was just fine and dandy. The youngest.

There was another day that he took them to the ranch where he worked. Showed them the horses and them big dogs an’ all. They weren’t used to much other’n chickens. How she and those little folk came to living alone out there like they did sure was a puzzle. He scratched his chin. Ha! Used to shave before he went over. Didn’t this time. He knew she was gone. The light in the windows been dead a couple of weeks. He missed the sound of the kids playing. And the boys asking him about hunting and tracking and the work that he did.

He looked down the swell of the field to the house. He stood and stretched. It was lonely listening to the wind. He had always looked forward to talking to her, sharing his stories and pulling a joke or two out of his hat. She thought it funny to decorate a picture of snow-decked trees cutting little circles and stars out of the red paper he’d purchased at the mercantile. He thought it was pretty swell. He had lots of other things that he had learned in his life that he wanted to share, to show, to give.

It didn’t matter to him that she had three children or that she might be poor in the ways of the material world. What mattered was her outlook on life and her care for her kids and the friendship she had in her eyes when he saw her; and that she thanked him for the things that he shared and didn’t take him or his attempt at gifts for granted. He figured she was just a good human being.

Sometimes he’d sneak some firewood over or bring a chunk of beef, even showed her a sandwich that he had tried in town that he thought they would all like. It was made from some kind of buttery sticky stuff that grew on a bush in the shape of a nut. Pea-nut he thought the merchant had said. Anyhow the kids sure liked it and clamored for more.

He loved to watch those little ones. Always on the move, up to mischief and always curious. They’d watch him when they thought he wasn’t looking and he’d turn and wink and they would look away and giggle. They were good kids.

No matter how cold this winter was – rain, sleet, wind, or whatever – he still swung by the house even if it was out of his way while moving cattle or checking fence lines or breaking the ice so the livestock could drink.

He kicked at the snow. It was cold this morning. It had snowed good a couple of days ago, but the wind had blown all around so there were traces of brown grass here and there. He fought the urge to go down to the cabin and start a fire. It wasn’t his place. He’d go if invited, thankful for the heat, but she wasn’t there. Just didn’t seem right.

He got back up on the horse. Whew! Colder’n heck out here. The saddle almost cried out along with his frozen backside. Well….he had to be breaking ice he figured. He had a couple of miles to go. What a chore to be doing on Christmas Day. He decided to ride down by the house. Just for old times’ sake, he thought.

He remembered a summer when he was younger and full of buckshot and vinegar, ready to slay the dragons of the world and thought there was no bronc he couldn’t tame and no man he’d be a’scared of. One of the older fellers at the fire one night was talking about his true love.

“I ‘member it was a hot summer that year. The cattle were all a’driftin’ in the coulees and thick brush. It was hotter’n a sourdough biscuit on a griddle. I just came down off the side of the mountain and saw her there. She was out hanging clothes on a line by a shack nestled in some trees close to the edge of the flat land. Pretty near noon it was. She had dark hair that shone like gold in that sunlight. I never could figger that. She looked like an angel there. She had a cotton dress that moved with the wind and the shadows of her form showed through ever now and then as the material swirled back and forth. I fell in love right there and then.”

The fire crackled some and the old-timer just sat there. We were all waitin’ for him to finish the story. Finally, after what seemed like an eternity, one of the others spoke up.

“Wahl, what happened, Bill? Ya just gonna sit there and leave us pantin’ in th’ dirt? Did ya talk to her? Did ya tell her how ya felt?”

The fire crackled some more. We wuz gettin’ some fidgitin’. Bill finally spoke.

“She had the finest tanned arms. Her face had a swoosh of freckles across it prettier than the finest night stars and her dark eyes an honesty that would make Saint Peter blush. She was all the woman this man would ever want.”

Bill just looked around at the fire-flickered faces, clenched his jaws a couple of times, swallowed and continued.

“I reined around and went after some more strays.”

“Nope. I figured that was the best love would ever be.

And I still love her the same today as I did then.”

An icy wind schwooshed past and he drew his coat tighter. He was at the house. Funny, he hadn’t thought of that story for years. He pulled up his horse. He stared at the house. He wanted to put giant coins over the two windows. Everything looked so gray and foreboding. Except for–what was that?

He was off his horse and crunched through the small drift in front of the door. There was an envelope on the edge of the door frame. It was nailed on. He gently took it off and opened it.

Daryl,
You are a good person. I will always remember you and you will always have a place in my heart.
Best wishes,
Mary

He was suddenly filled with warmth. He threw his hat up in the air, startled his horse. He ran out and grabbed the reins,

He walked over, leading his horse, and picked up his hat. He mounted, turned and looked once more at the house, unbuttoned his coat, then rode off stuffing the treasured present in his shirt pocket.

He had a smile on his face and, for all his cares, it was summer and he was riding through a field of flowers. 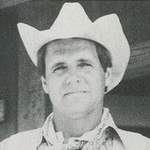 Dorman Nelson is a Californian writer who has been in print since he was in pre-school. He wrote a news column for a number of years and was the publisher of Western Tales Magazine. He writes science fiction and general fiction and is currently completing a frontier biography on John Liver Eating Johnston, immortalised by the 1972 movie Jeremiah Johnson.
www.johnlivereatingjohnston.com
http://truewest.ning.com/profile/DormanNelson