A Question of Underwear 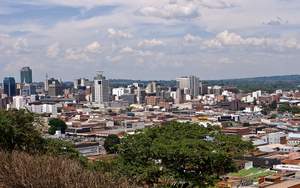 My virgin mother stands at the bedroom door, clothed in a brown lace petticoat and nine hours of anger. She lunges at my father the moment he comes out and he, still hung-over, sidesteps to escape her wrath, making his way out of the house. She follows.

“Beat me up now ka. Lay your hands on me now. Prove you are a man in daylight. Man in name only. No. A man in the underwear only! If the roof is leaking, I fix it. My musika puts food on the table. Today you must give me your underwear so I can become a man once and for all.”

Her saggy breasts heave with each sentence.

“Beat me up, Rangai. Beat me now. Or does your strength come from the bottle? He he he he!” she laughs, clapping. “A man who buys his strength for three dollars”

Mother’s performance once again draws the attention of Mai Granite. She leans her shapeless upper body over the low fence separating our compounds, feigning concern. But after five years of their bickering, you would think she would stop.

If I had not seen it with my own eyes, I would have never believed that at some point my parents did get along. Up until I was seven, they got along like a house on fire. But houses burn down, my father the casualty of this incineration. People say father drinks too much. I know he does it to escape his life. His life, without the job at the Harare Waverly Factory where he used to make quality blankets. His new job, collecting anything plastic from people’s trash for a recycling company. Rifling through leftover dinners and soiled sanitary towels. It embarrasses him more because he knows how much it embarrasses mother.

But he’s a quiet man, my father, never talks about things. Mother says I’m way too much like him. Not quiet when he is drunk though. You should see him; comes home a changed man, in a staggering confidence.

“Iwe Virginia!” he would yell close to midnight.

“Wake up and prepare my food. What are you good for if you cannot perform the most basic of wifely duties? All you do is complain about how blue the sky is. You know that I paid seven live cows for you? How many men do that? Even for wives of better calibre. Nxaa!”

Often there are threats of a beating I have come to realise will never happen. When not under the influence, my father is too sensible. When inebriated, he is often incapable.

Mother never reacts during the night. She knows to wait for morning – when she is in her best form and her husband at his worst.

Which explains these Saturday morning showdowns.

It is Sunday now, and my pious mother drags me to church to pray for my sins and shortcomings. I mostly pray for them. My father does not believe in a god though. I’m not sure I do anymore myself. He usually spends his Sundays sleeping off his Saturday bhabharasi.

It is a surprise then, when we get back home that he is nowhere in sight. It is not long, however, before we find a pile of his underwear and a note on the dining table;

Chipfeka ka. I have gone to look for more fitting underwear. Don’t expect me back.

Gwendolene Mugodi is a twenty-something, budding writer. She is currently doing an internship with EducationUSA Zimbabwe. Fuelled by cherry-ripple ice cream, she writes short stories, often inspired by strangers who have no idea they have been eavesdropped on. She lives in Harare with her mother and siblings.