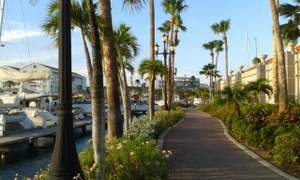 Oranjestad, the capital of Aruba, is a delightful little town named after the Dutch Royal House of Orange. Many locals still refer to downtown Oranjestad by its old name of Playa (Beach). The European house of Orange-Nassau occupies a central role in Dutch history. In the sixteenth century, William the First of Orange organized the Dutch revolt against Spain and presided over the formation of an independent Dutch state. For a long period the Netherlands was a republic until, in 1815, it again became a monarchy under the house of Orange-Nassau. Oranjestad is a town of around thirty to forty thousand people. This, I believe, is a good number, neither too big nor too small. Aruba as a whole, which is one of the countries of the Kingdom of the Netherlands, has around a hundred and six thousand residents and, in 2014, attracted over a million visitors.

I enjoy walking in Oranjestad. I live in Paradijs (note the Dutch spelling) and walk to the Xavier University School of Medicine in Santa Helenastraat, where I work. Aruba is a flat island with a few small hills towards the north. The trade winds roar across the landscape and are particularly strong along Santa Helenastraat. Walking to work against the fierce winds affords good exercise and hopefully keeps the heart in good shape. The strong trade winds moderate the temperature in Aruba, which is only about ten degrees north of the equator.

In the evenings I go for long walks to keep fit and to relax. Walking towards the harbor area you soon come to the Wendy’s roundabout. Roundabouts are a major feature in Aruba and, during the Christmas holidays, are gaily decorated. Various organizations compete for the title of the best decorated roundabout. At the roundabout there are two options for a long walk – eastward towards the Talk of the Town hotel, the airport and the sunrise city of San Nicolas, and westward towards Eagle Beach and the hotel area.

My two fellow-doctor friends and I all enjoy the walk. Ratna Perikala is a red-blooded Texan and Shankar Majhi is from Dharan in Eastern Nepal. Both enjoy life on the island and enthusiastically participate in various events organized periodically in “one happy island”.

I will first describe the walk towards Eagle Beach and the hotel area. It is initially along the L G Smith Boulevard, Aruba’s major arterial road. L G Smith was the managing director of the Lago oil refinery in San Nicolas from 1933 until 1946. During the Second World War, it was attacked by a German U-boat. The refinery was the second largest in the western hemisphere at that time and was bested only by the Royal Dutch Shell refinery in the neighboring island of Curaçao. There is a beautiful palm-lined path which goes past the big Certified Supermarket to the family-owned Promenade Restaurant. There are also a few divi-divi, or watapana, trees, which are endemic to the island. The divi-divi grows well in the arid islands of Aruba, Bonaire and Curaçao – which together are known as the ABC islands.

The big Divi Resorts sprawl on both sides of the J E Irasquin Boulevard. J E, also known as Juancho Irasquin, was a pioneer of tourism in Aruba and built the first luxury resort in Palm Beach, the modern-day tourist hub. The Aruba Caribbean Hotel opened in 1959. The white sands of Eagle Beach stretch to the tourist area and have many low rise hotels. They are usually packed with sun worshippers.

At the beginning of the boulevard on your right you will see Aruba’s Central Bank. The bank building is a Dutch renaissance structure. I am always surprised at how often, as a result of the colonial legacy, European renaissance architecture has been transplanted onto tropical soils. The bank started operations in 1986, after Aruba became an autonomous country within the Kingdom. Aruba’s currency is the florin and the colorful family of notes has been designed by the Aruban artist, Evelino Fingal. Fingal gets his inspiration from old American Indian pottery and from the animals unique to the island.

On your right you see the big Oduber Hospital. This has an interesting history. It was founded in 1976 by a non-profit foundation and is named after the first physician of Aruban origin, who used to treat patients in his home. The very first hospital on the island, the San Pedro de Verona hospital, had been opened by Catholic nuns in 1920. The Oduber Hospital has referral agreements with a number of foreign hospitals.

The adjacent beach is prime turtle-nesting territory and, during the season, watching the young hatchlings emerge from their eggs and speed towards the blue waters of the Caribbean is a remarkable experience. Turtugaruba is a local non-profit organization in charge of Aruba’s turtle protection program. It maintains notice boards showing how many turtle nests have successfully produced hatchlings during the course of the year, together with comparative figures for the previous year. I feel a sense of exhilaration as I watch the graph climb slowly upwards. Four species of sea turtle nest on Aruba: the leatherback, the loggerhead, the green and the hawksbill. The beach hosts various events and tournaments including an international beach tennis championship.

I will now describe the walk towards Aruba Airport and the Talk of the Town hotel. A paved walkway lined with palm and coconut trees passes in front of the Aruba Ports Authority, a limited liability company founded in 1981. The huge crane is a famous landmark, visible from different viewpoints on the island. As you walk towards downtown, on your left you come across the Flea Market, which advertises Jamaican-style jerk cooking and has the largest red beach-chair in the Caribbean. The beach chair has a hashtag (#bigchairaruba), underlining the interconnectedness of our world. Continuing towards the historic center of the town you come to the main shopping area, which is lined by jewelry shops, many of them owned by people of Indian descent.

Oranjestad was built around Fort Zoutman. Built in 1796, this is the oldest building on the island. For a long time the town had no official name and was known as Paardenbaai (the bay of the horses), a place from where horses were exported to neighboring Curaçao. Aruba does not have many Dutch colonial buildings, as the major administrative center of the Dutch Antilles was in Curaçao. At one time Fort Zoutman was on the shore of the Caribbean. But recently, and in thegood old Dutch tradition, land has been reclaimed and the downtown shopping and entertainment area is actually on reclaimed land.

Every Tuesday night the colorful Bon Bini (“Welcome” in Papiamento, Aruba’s local language) festival is held in the historic fort. Downtown and Main Street (named after Betico Croes, one of the architects of Aruba’s independence) were once the main business areas of the island. But, with the growth of Palm Beach, many shops and other establishments shifted there to be closer to the tourists. The government has embarked on an ambitious project of downtown renovation and a street-car – or tram – service has recently been started. The renaissance casinos, marketplace, suites and hotels are located around a beautiful lagoon and walking around the lagoon is a delightful experience.

I am happy that, in Aruba, nearly all the beaches are fully accessible to the public. You now reach the Wilhelmina Park and one of Aruba’s oldest statues – it is of Queen Wilhelmina and was installed in 1955. Wilhelmina was Queen of the Netherlands and of Aruba from 1898 to 1948.

As you continue walking you come across the Governor’s residence on your left. The Governor in Aruba is the representative of the Dutch King, Willem Alexander. The residence is currently being renovated. Continuing towards the airport, the Boy Ecury monument is a prominent landmark. Boy Ecury, a member of a prominent merchant family in Aruba, was a Second World War Dutch resistance hero. His statue is near the Juliana school and his family home now houses the archeological museum.

The walk is now along the Linear Park, the first phase of which, from the Surfside Beach to the Wilhelmina Park, is complete. The park when completed will be the longest linear park in the Caribbean and will extend as far as the hotel area. The Surfside Beach is popular with local families and, around Easter, many camp out on the beach, living in tents. The Plaza Turismo is an important square in the Linear Park and often hosts events. Opposite the plaza is one of Aruba’s oldest hotels, the Talk of the Town.

Walking along Aruba’s roads is mostly pleasurable. The constant wind blows away car exhaust and dust and most motorists are considerate towards pedestrians. On one occasion the traffic actually stopped to allow me to retrieve my cap from the road when it had been blown away by the strong wind. Walking remains one of life’s simple pleasures. To paraphrase the Johnnie Walker ad “Keep on Walking!”